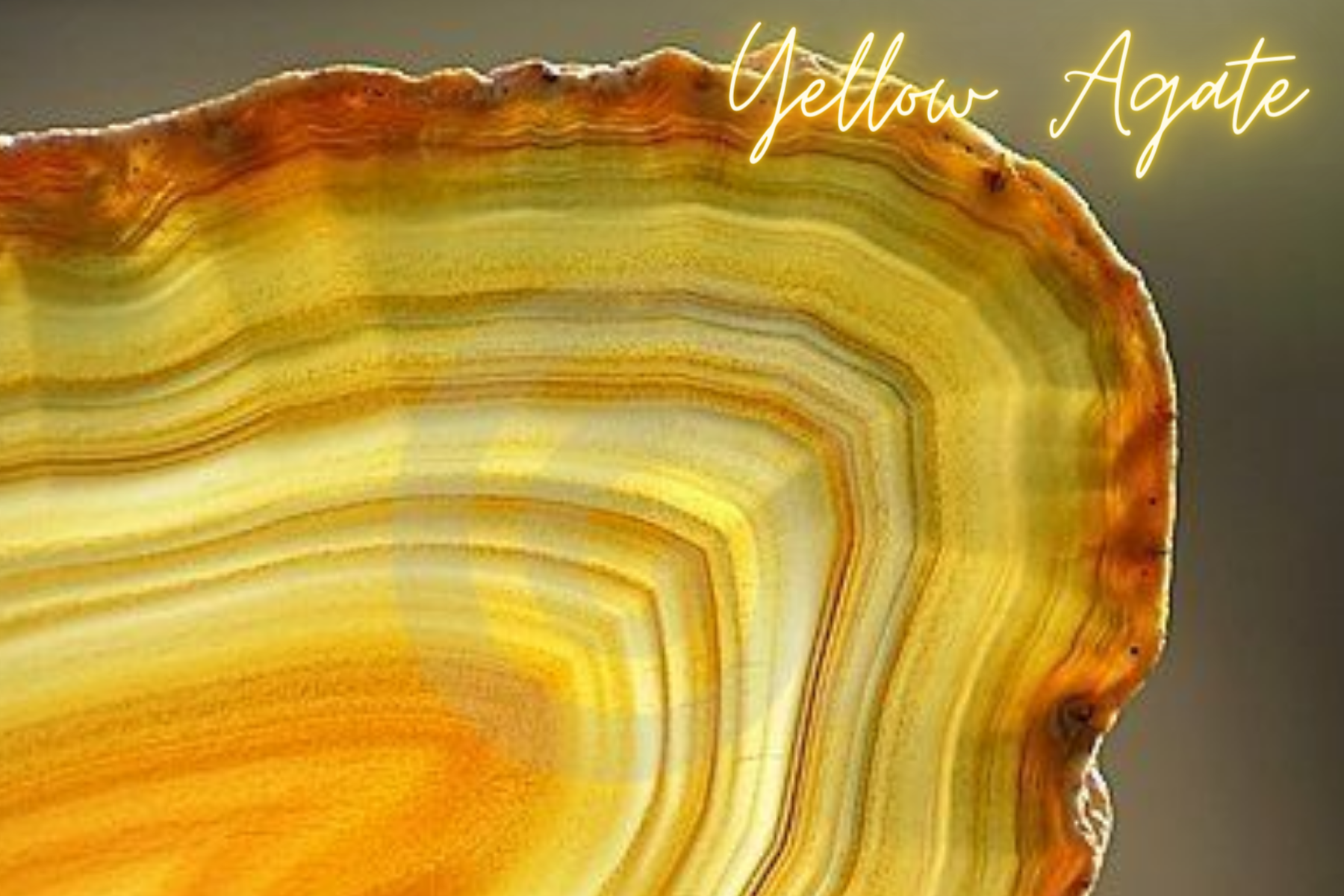 One of the most popular kinds of agate is yellow agate and it's a kind of chalcedony that is usually yellow. This stone is believed to have been formed when a layer of quartz was deposited on top of layers of chalcedony.

Yellow agate properties are often linked to luck, wealth, and good luck. People also think of them as protective stones that can help with any kind of trouble or a bad feeling.

The name comes from the color yellow, which in many cultures around the world means happiness and joy. 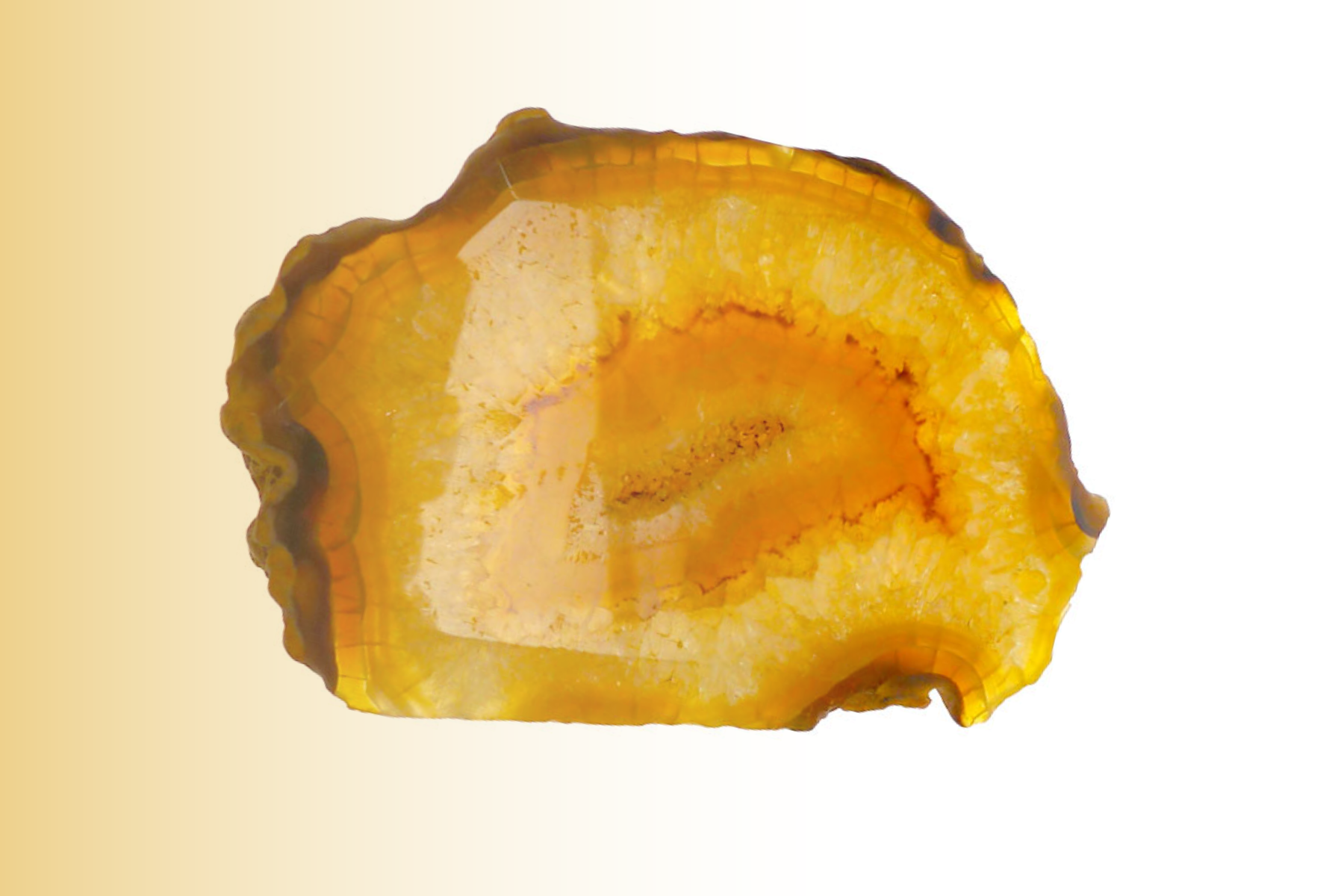 An inside view of a yellow agate stone

Agate has been a very valuable stone for a long time because of its beautiful and unique colors. Agates have been used for decoration since Ancient Greece. They are most often used to make decorations or jewelry.

Agates are beautiful stones to use as decorations because they have layers of patterns and colors that are very interesting to look at.

Agate is a powerful, protective gem that comes in many different colors, from calming blue and purple to grounding red and soothing orange and cream. Each color has its own special powers. Agate is a great stone to keep you emotionally stable and sane during hard times.

This stone works well with the lower chakras and makes your things, feelings, and relationships safe and stable. Agate makes you stronger and more focused calms your mind and brings love and kindness into your life.

It is a master healer with a calming effect that relieves stress and tension and makes you feel hopeful. Agate brings peace, calm, and good vibes into your space. It also brings you luck.

How To Identify Different Types Of Yellow Agates?

There are different kinds of yellow agates, and you need to know what kind you have to figure out how much it's worth.

Yellow agate: It is a type of agate with a layer that is yellow or gold. This color can either come from nature or be added.

Pale Yellow Agate: This type of yellow agate doesn't have many different colors in it. It usually comes in the shape of smooth round, oval, or rectangular stones.

Amber Yellow Agate: Amber-colored yellow agates have a mix of brown and yellow colors that make them look orange-yellow when polished and made into jewelry or other things like vases and bowls.

Real agate comes in many colors, but white, milky brown, light yellow, soft orange, light to dark brown, and reddish brown are the most common. Gemologists can tell if a stone is a real agate by its bands of color, which can be arranged in concentric circles or in horizontal layers.

Who Should Wear Yellow Agate?

Yellow agate is good for both mother's and child's health during pregnancy because it helps to keep things stable and protects. Each person has a different type of harmonious agate stone.

What Does Yellow Agate Stand For?

Yellow agate is a stone that brings clarity and sharpness to the mind. It protects you from the negative energy of other people and helps you keep your emotions in check. Yellow Agate is also thought to bring luck and money.

It's hard to choose the right yellow agate for you. There are a lot of different stones to choose from, and each one has its own special qualities.

Visiting a reputable gemstone dealer is the best way to find the right stone for you. If you don't know where to look, try contacting a gem club or museum in your area.