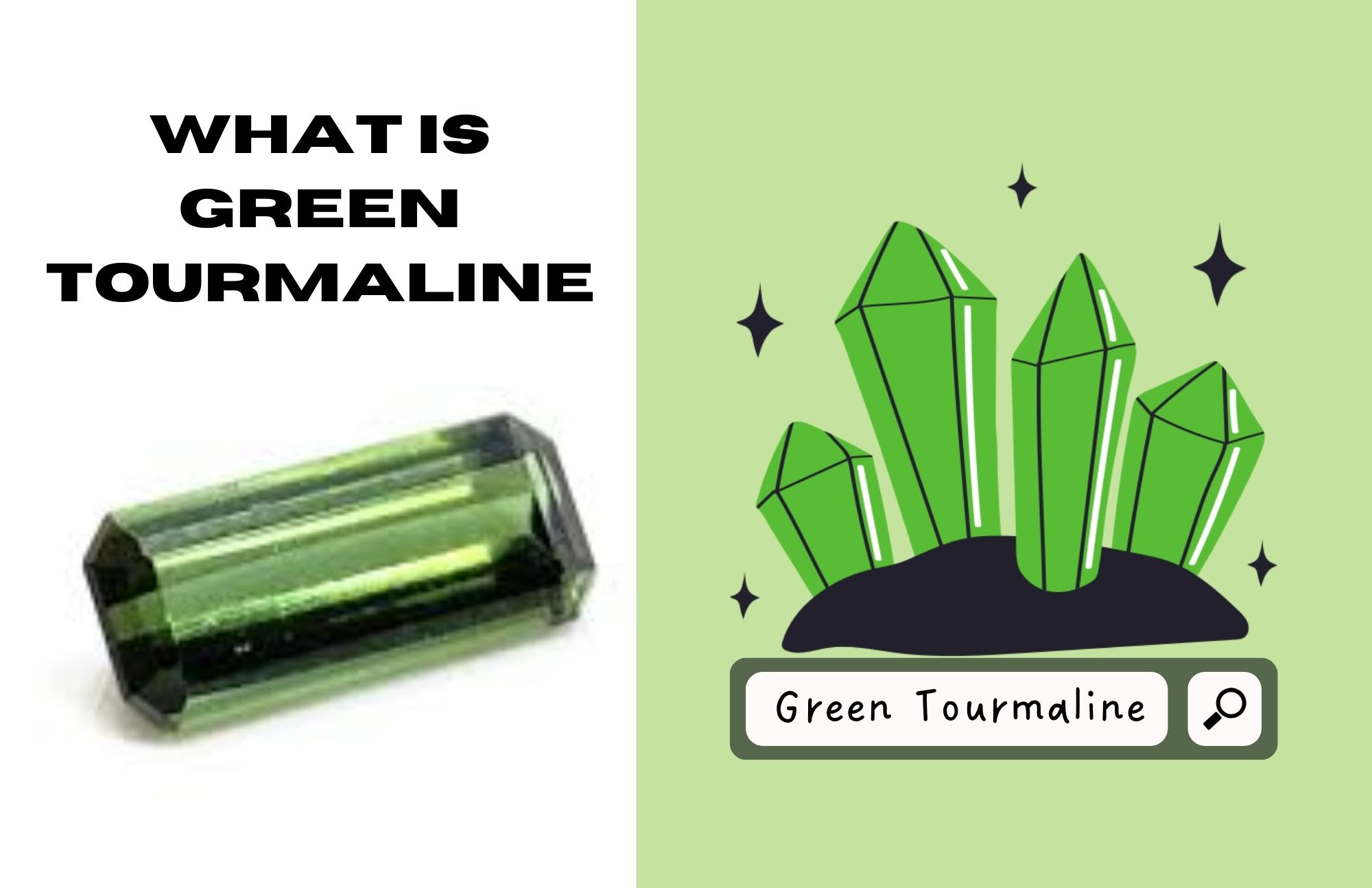 Ever heard of a stone that comes in a variety of colors or that can be toned in different ways? It is composed of a variety of different sorts of minerals, tourmaline is also one of them.

It is sometimes referred to as "rainbow stone" because of the different hues that can be seen in it. The green tourmaline, on the other hand, is the one color we'll be discussing in this article. We will also go over the multiple kinds of green tourmaline that are available.

This one is perfect for anyone who enjoys the color green, especially when it comes to their garment collection.

What Is Green Tourmaline

People sometimes call it Verdelite or Green Tourmaline because it has a lot of lithium in it and is part of the Tourmaline family. It forms into long rods, triangles, and pyramids. Almost always, it is found with or next to Quartz.

Green Tourmaline is part of the trigonal crystal system. It comes in long, slender to thick prismatic and columnar crystals with triangular cross-sections.

Uneasy To Cut Type Of Gemstone

It can be cut in many different ways but some tourmalines like the green tourmaline is need to be cut carefully because the intensity of their color changes depending on where they were grown.

There are some types of dark stones that have to be cut in a way that the table is on the main axis. To get more depth of color from a light stone, you should make sure the table top isn't facing the longitudinal axis.

In order to align the cut, the cutter must pay a lot of attention to these things. Otherwise, the cut gemstone will be too bright or too dark when it is done.

People are confused about this tourmaline, sometimes they think of it as an emerald. At first, I also thought that the green tourmaline is just the same with emerald, because they look so similar. But don't be confused; take a look at the image below to see the difference between the two. 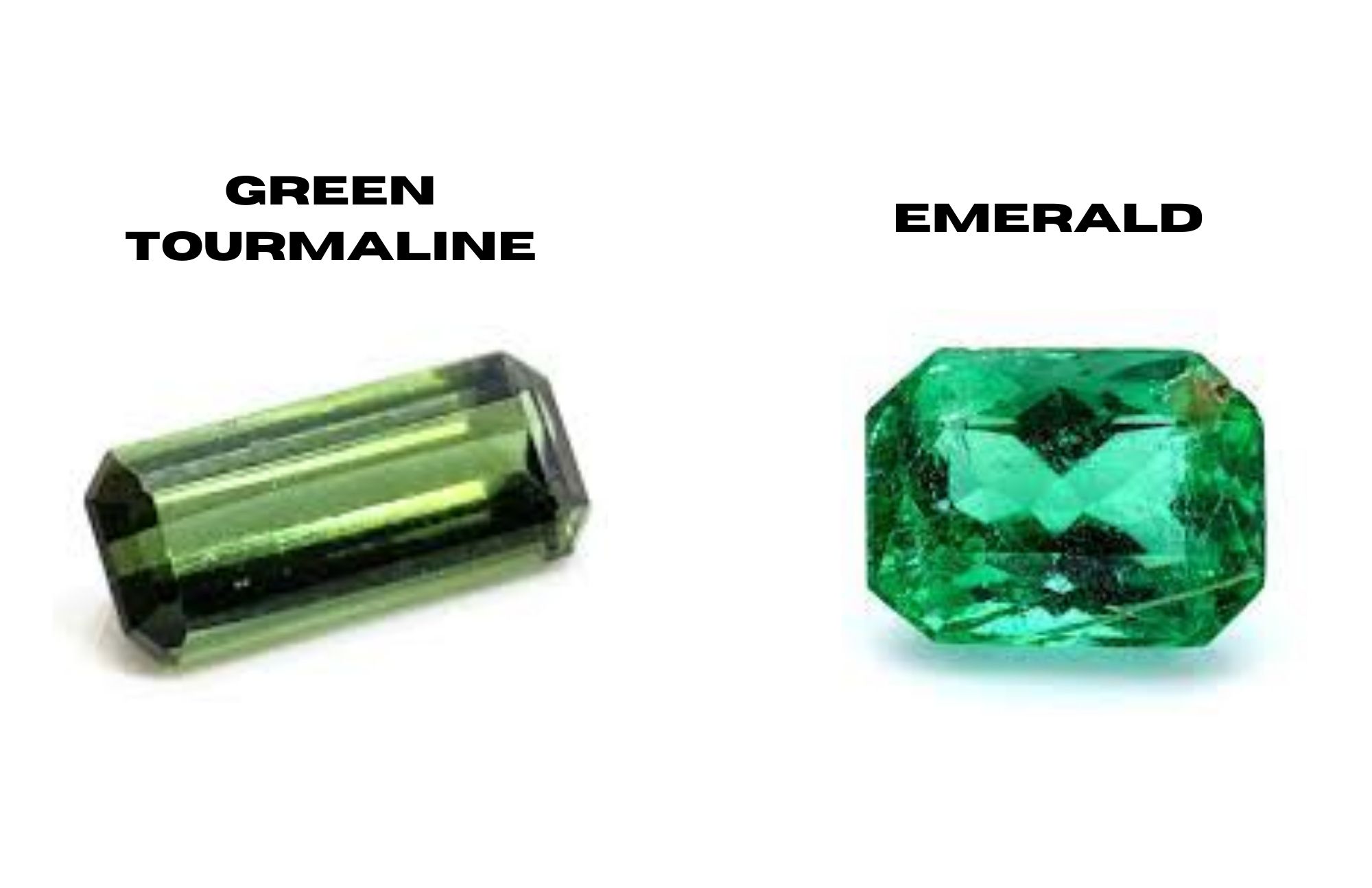 For an Emerald, the colors that show up when you look at it are yellow and blue, while for the Tourmaline they are pale green and dark green. Emeralds are usually found in rough hexagonal shapes, while Green Tourmaline is usually found in trigonal-shaped crystals with long lines.

Now that you understand the differences between the two, it's time to learn about the multiple kinds of green tourmaline available.

Rare Kinds Of Green Tourmaline That Are Available 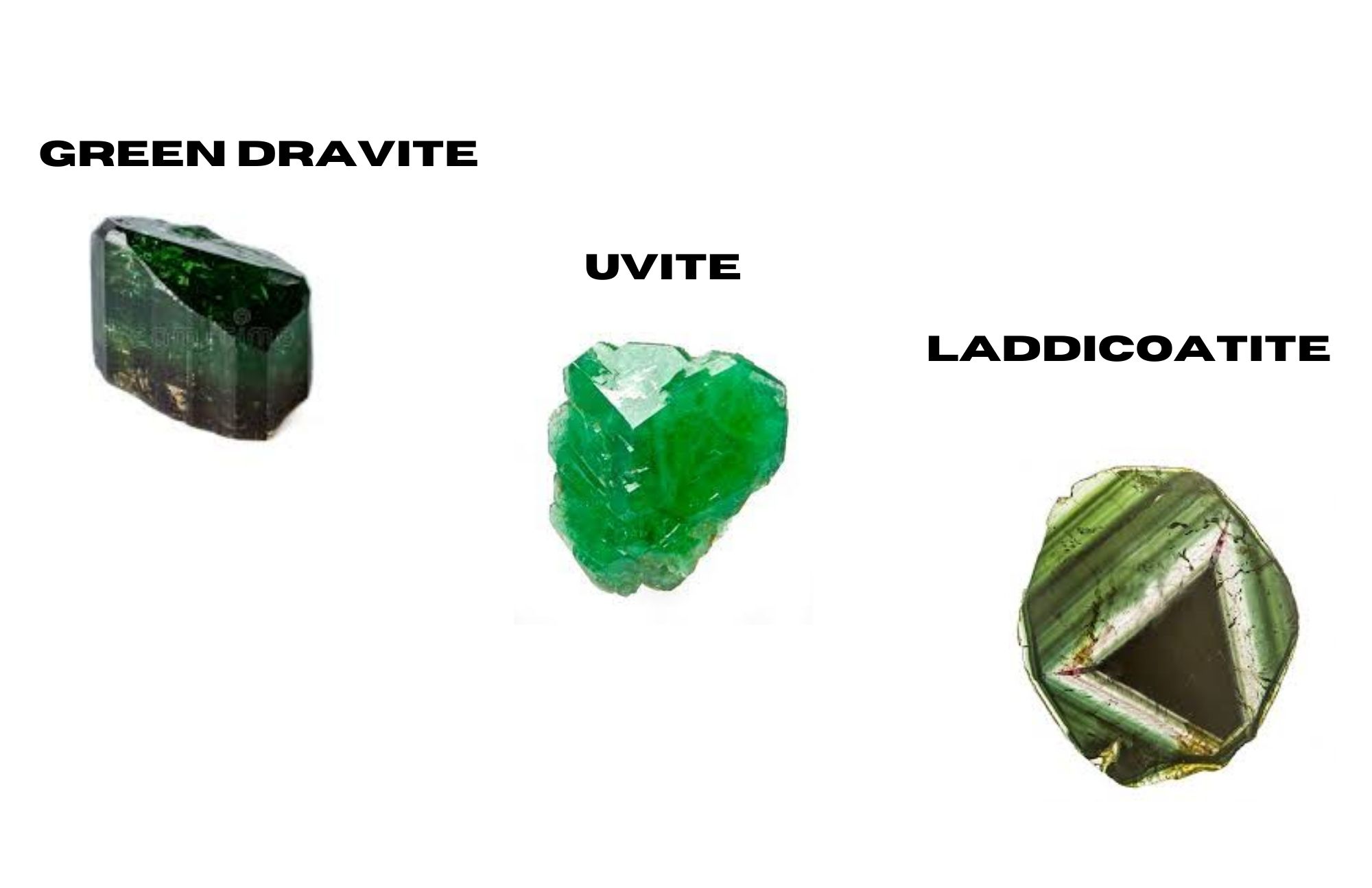 The three kinds of green tourmaline, such as green Dravite, Uvite, and Laddicoatite, on a white background

Chrome tourmaline is a type of chromium-bearing green dravite that is very rare and can be cut into gemstones. Dravite is one of many different types of tourmaline. Chrome tourmaline is only found in Tanzania. It is often found with green tsavorite garnet, which is a rare and valuable type of garnet.

Most Tourmalines form in the same way, but Uvite is also a rare type of Tourmaline that doesn't look like most of the other Tourmalines. Some other types of Tourmaline are more colorful than this one. It comes in beautiful green and reddish-brown crystals, as well as lustrous crystals that look like they are made of metal.

Liddicoatite is again one of the rare type of Tourmaline that has a calcium atom instead of a sodium atom in its chemical formula. This makes it almost the same as Elbaite in terms of its chemical composition. The IMA has named the fluorine-rich Liddicoatite Fluor-liddicoatite, which is a separate mineral species from the rest.

How Can You Tell If Green Tourmaline Is Real

Some real tourmaline might have a pale pink section, bright green and shiny yellow sections, and a row of them all together in a straight line.

As shiny minerals like ammolite and pyrite have many different colors that don't mix together, tourmaline's colors stay separate most of the time and don't mix like they do in these other minerals.

Which Is Better Tourmaline Or Emerald

There are a lot of inclusions in most emeralds. This adds to their beauty. It is on the Mohs scale from 7 to 7. It's toughness is thought to be fair.

In general, tourmaline is also resistant to light and chemicals. However, heat can damage a tourmaline.

Green is a wonderful color in everything, and it draws the attention of many people. I recommend that you experiment with green tourmaline on your personal collection, such as jewelry or other items that you may use.

If you use them in your accessories, they can have the appearance of an attractive crystal.

Try it out on your accessories and you'll get more confidence in your ability to wear them.