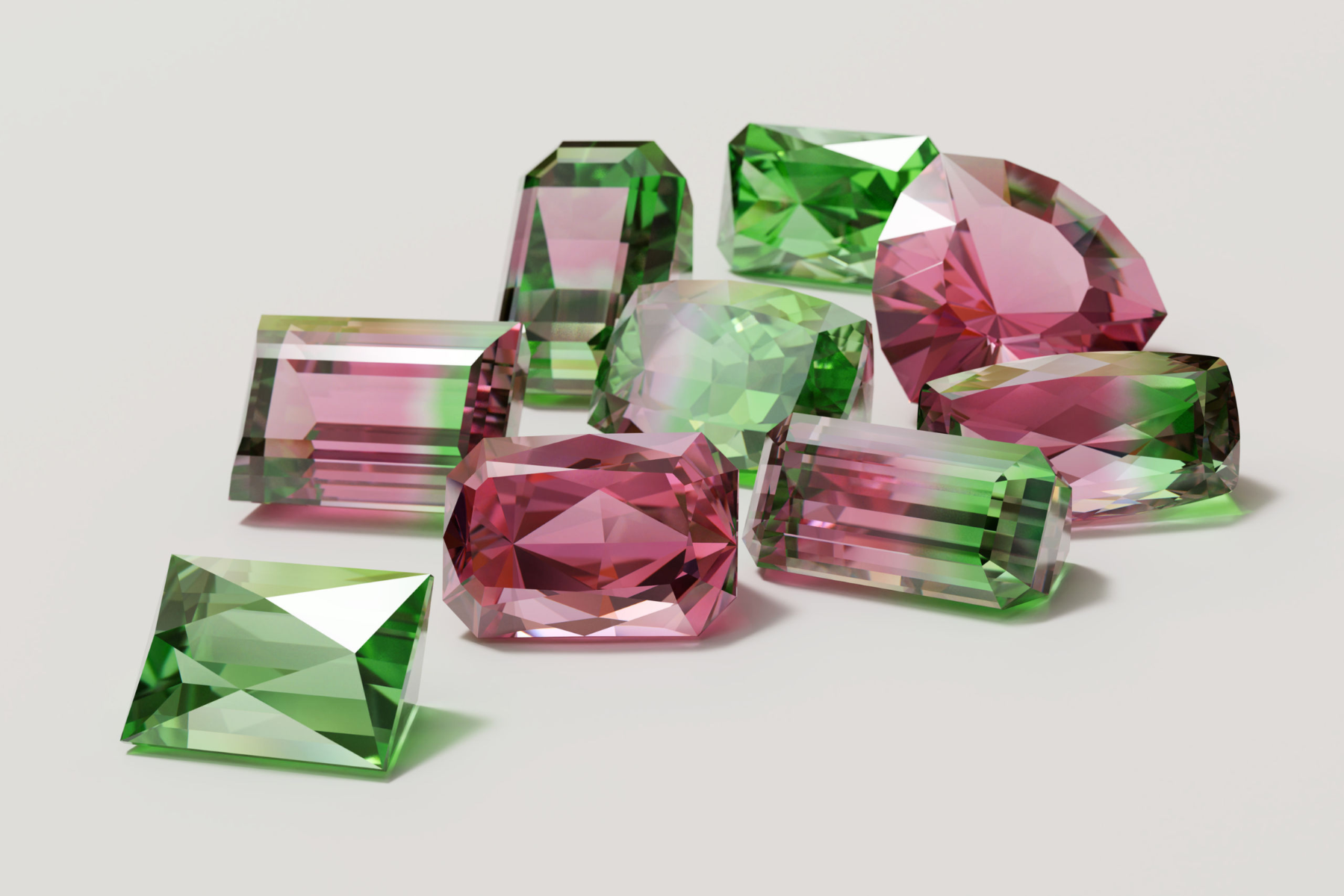 Rainbow stone is another name for tourmaline, which is a type of multicolored stone. It gives off stunning color tints, which is something that is beneficial for a piece of jewelry.

In spite of this, tourmaline comes in more than one variety if you're looking for a stone with a single dominant color, you can get tourmaline of a different kind. There are six different types of tourmaline available for purchase.

The Science Of Tourmaline

Tourmaline: What exactly is it? The color of a tourmaline gemstone is determined by the percentage of its different components and can be any of the following:

Tourmaline is a precious stone that is a member of the diverse borosilicate family and may also contain magnesium, iron, and other metals.

Six Types Of Tourmaline You Can Purchase

The major tourmaline species are elbaite, liddicoatite, dravite, uvite, watermelon, and schorl. Most gem tourmalines are elbaites, which are high in sodium, lithium, aluminum, and sometimes, but very rarely, copper. 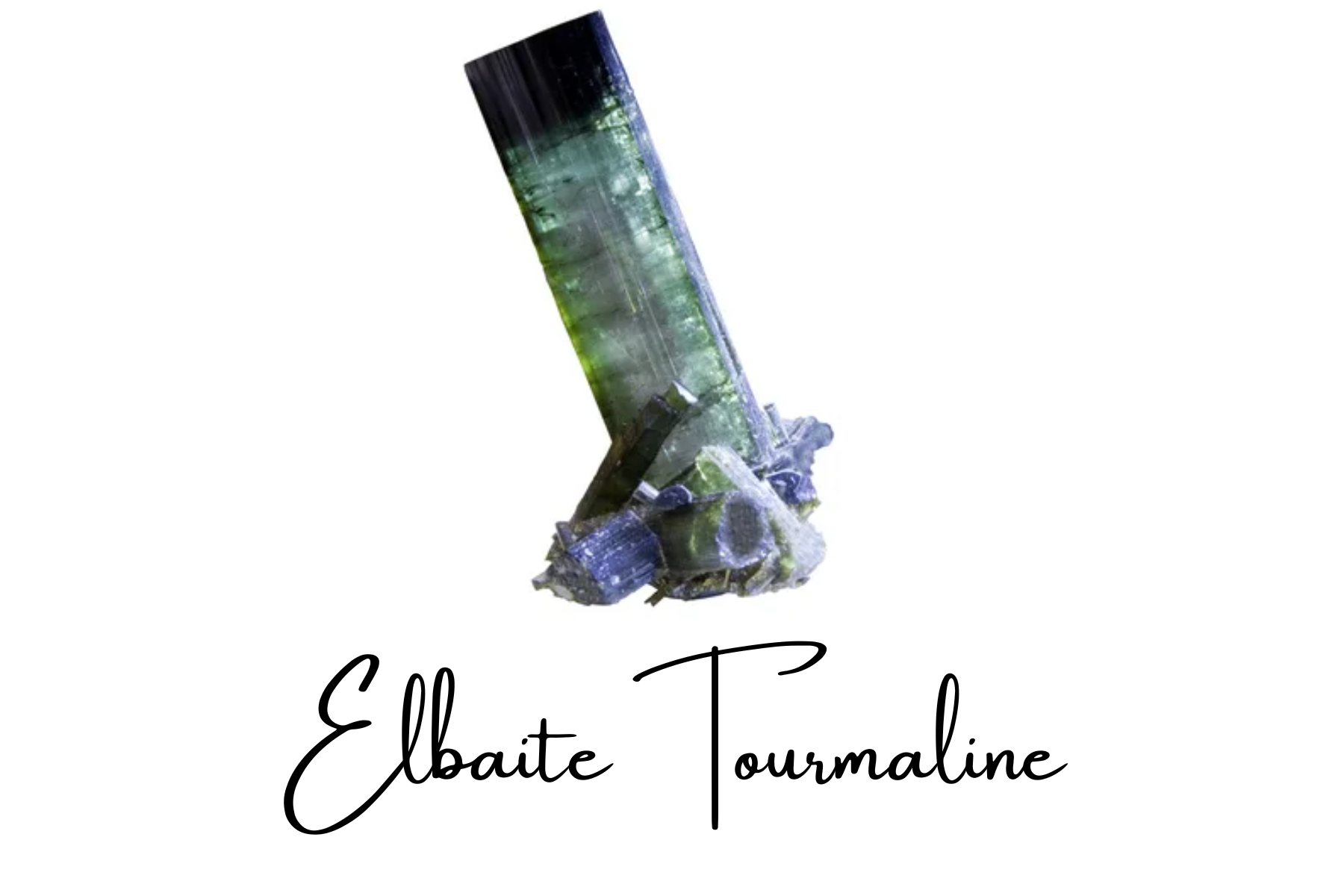 Elbaite is the form of tourmaline that is considered to be the most valuable and well-known. Elbaite tourmalines represent the vast majority of multicolored tourmalines and almost the whole types of tourmaline gemstones.

Elbaite is almost always found in many different colors, making it one of the minerals with the greatest color uniqueness.

The Canary mining area in the Lundazi District of eastern Zambia is the most important source of elbaite in the world. This vibrant gem comes from that area. It has been mined since the early 1980s, and the typical sizes found are smaller than one carat.

Properties: It's believed that this gemstone gives soul to all things, like words, pictures, paintings, buildings, and furniture. You will get help to make something special and unique. It also helps to make things like education and hospitality possible. 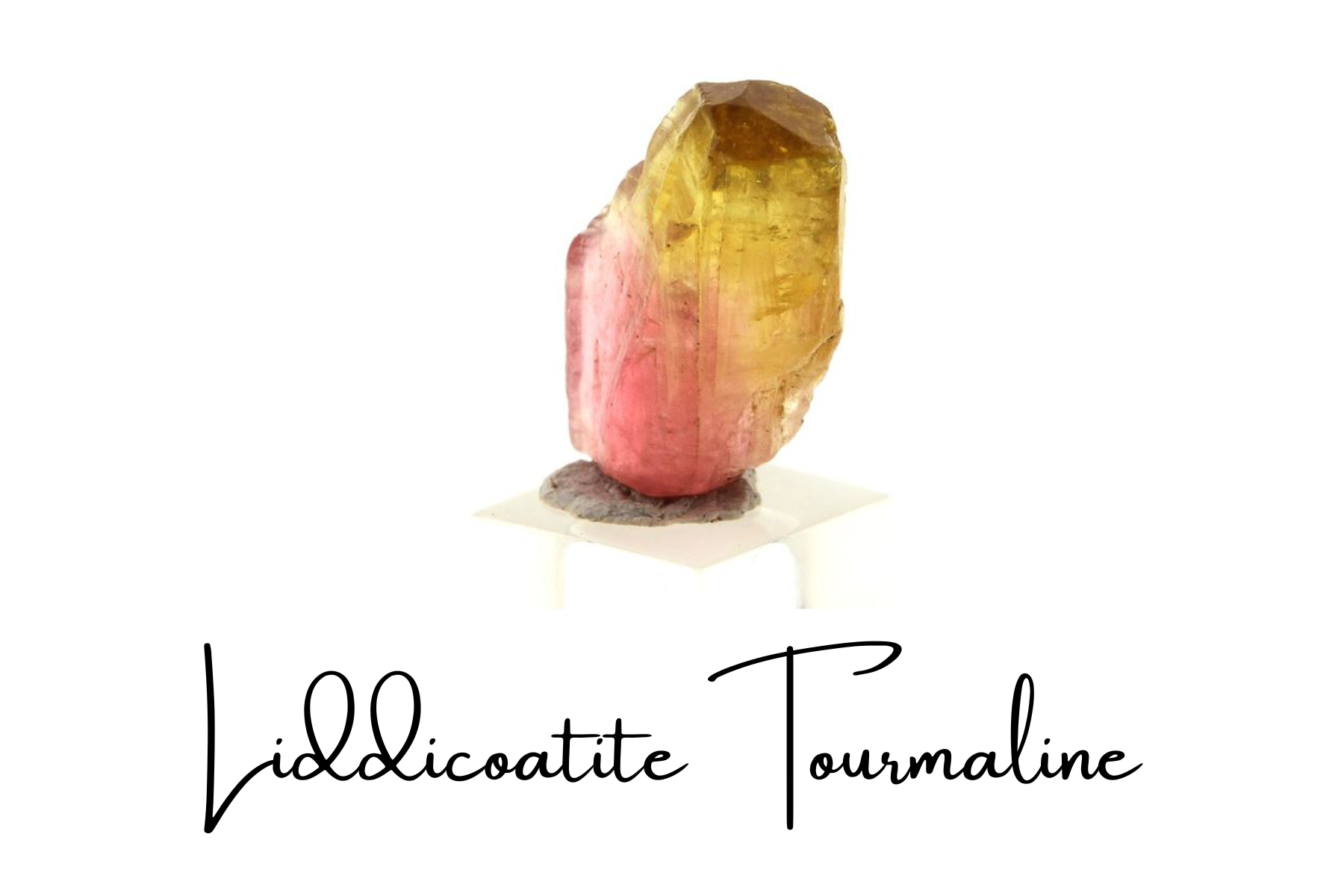 Liddicoatite is a rare form of tourmaline that has a chemical composition that is nearly identical to that of elbaite. However, the chemical formula of liddicoatite contains calcium rather than sodium as one of its constituent atoms.

It was not until 1977 that the distinct tourmaline species known as liddicoatite was identified. Before that time, people had the wrong idea and thought it was elbaite.

The indexed stout prismatic purplish-red crystal was labeled as "liddicoatite" by the supplier, and it originated from Anjanabonoina pegmatites in Ambohimanambola, Betafo, Vakinankaratra, Madagascar. This location is approximately 55 kilometers west-southwest of the city of Antsirabe.

Properties: Liddicoatite is believed by practitioners of metaphysics to be a traditional healing stone that can align mental processes, encourage understanding and self-confidence, remove illusions, and provide insight into the causes of conflict and struggle. 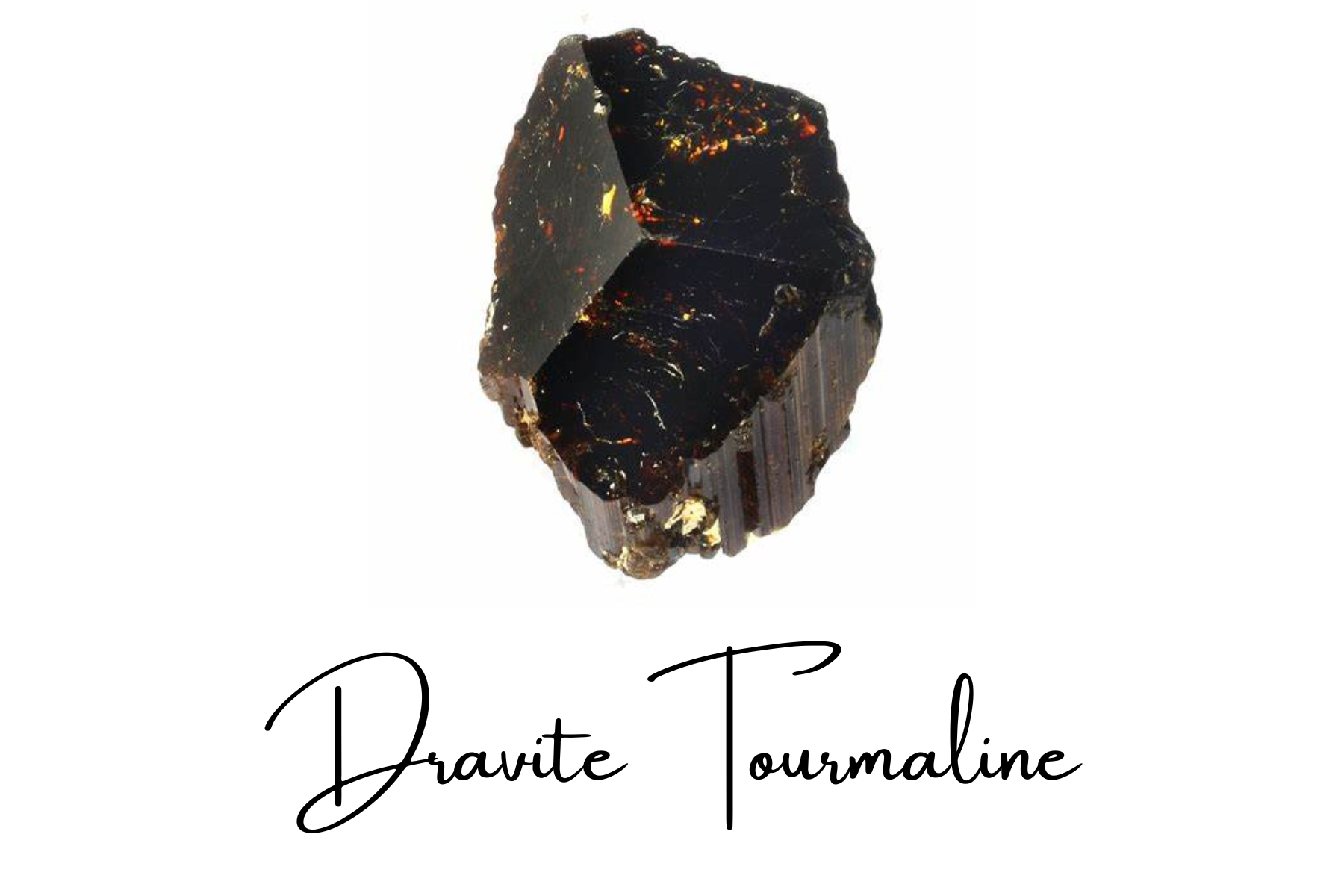 The term "Brown Tourmaline" is most commonly used to refer to dravite. Tourmaline in this form is relatively common, and it usually comes in formations that are simple and uninteresting.

However, crystals from specific areas have the potential to be extraordinarily glossy and beautifully crystallized. Dravite got its name from the town of Dravograd in Slovenia, which is also the location where the mineral was first described.

This tourmaline locality, also known as the type locality for dravite, can be found at Dobrova, which is located close to Dravograd in the Republic of Slovenia.

Hardness: On the Mohs scale, it has 7.0 hardness.

Properties: Dravite now has powerful healing powers, similar to those of other tourmalines. It is more accurately described as an "earthing" than as "grounding" due to its balance with the Earth Chakra.

In addition to this, it has a powerful effect on the solar plexus, opens and strengthens the navel chakra (also known as the tan tien or the hara), and provides a sense of inner strength and empowerment. 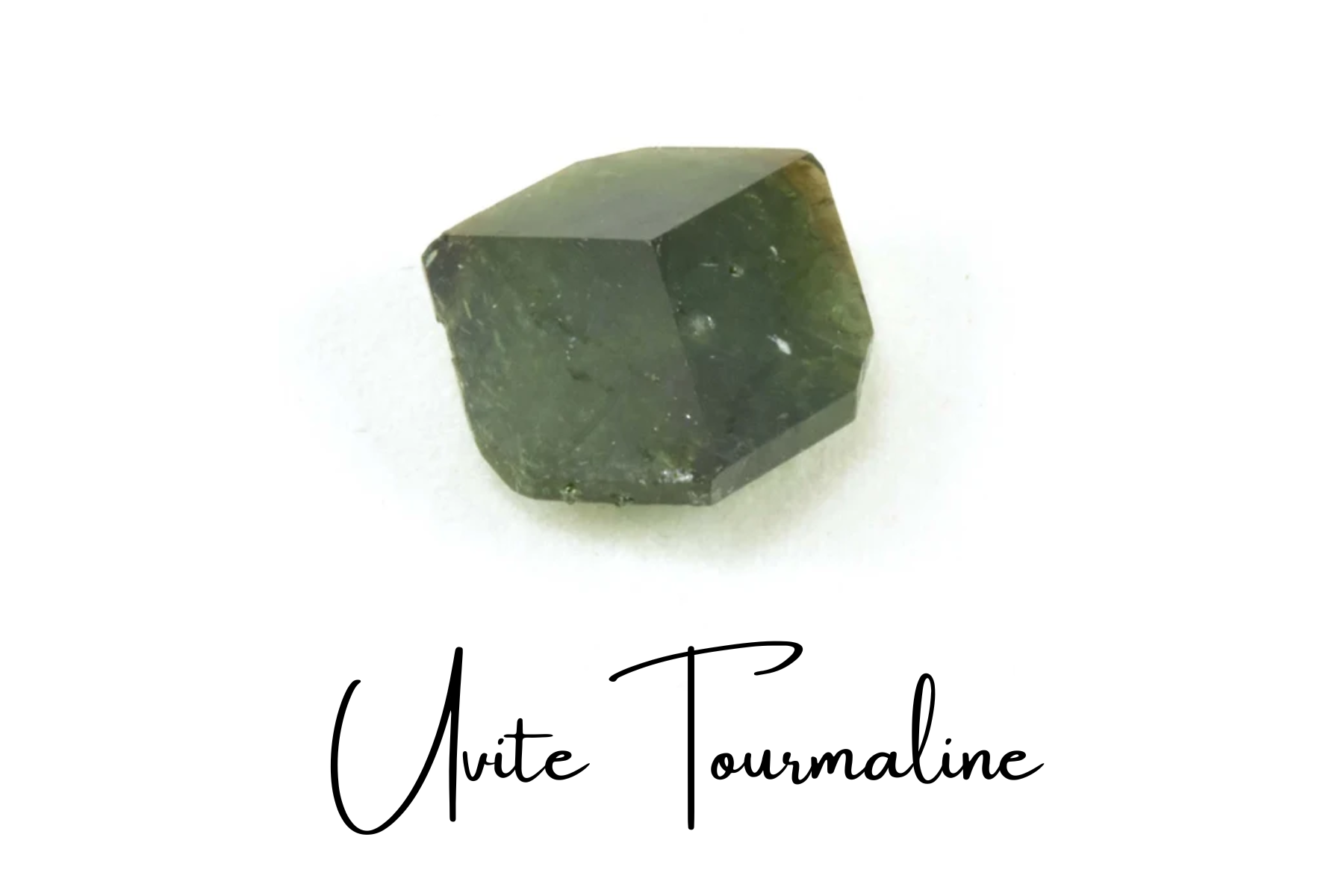 Uvite like liddicoatite is also a form of tourmaline that is not very common, and its crystal structures are different in comparison to those of the majority of other tourmalines.

It is possible to find shiny submetallic crystals in addition to beautiful green and reddish-brown crystals, despite the fact that this form of tourmaline does not have the same range of colors as other types of tourmaline.

The name "Uvite" originates from the "type locality" in the Uva Province of Sri Lanka, which is where the mineral was discovered for the first time.

Hardness: On the Mohs scale, it has 7.5 hardness.

Properties: Practitioners of modern metaphysics are of the opinion that uvite can relieve phobias, boost one's sense of self-confidence, free one from madness, bring one closer to the truth, and increase one's fighting spirit.

Uvite is not used for anything in the jewelry or technology industries. 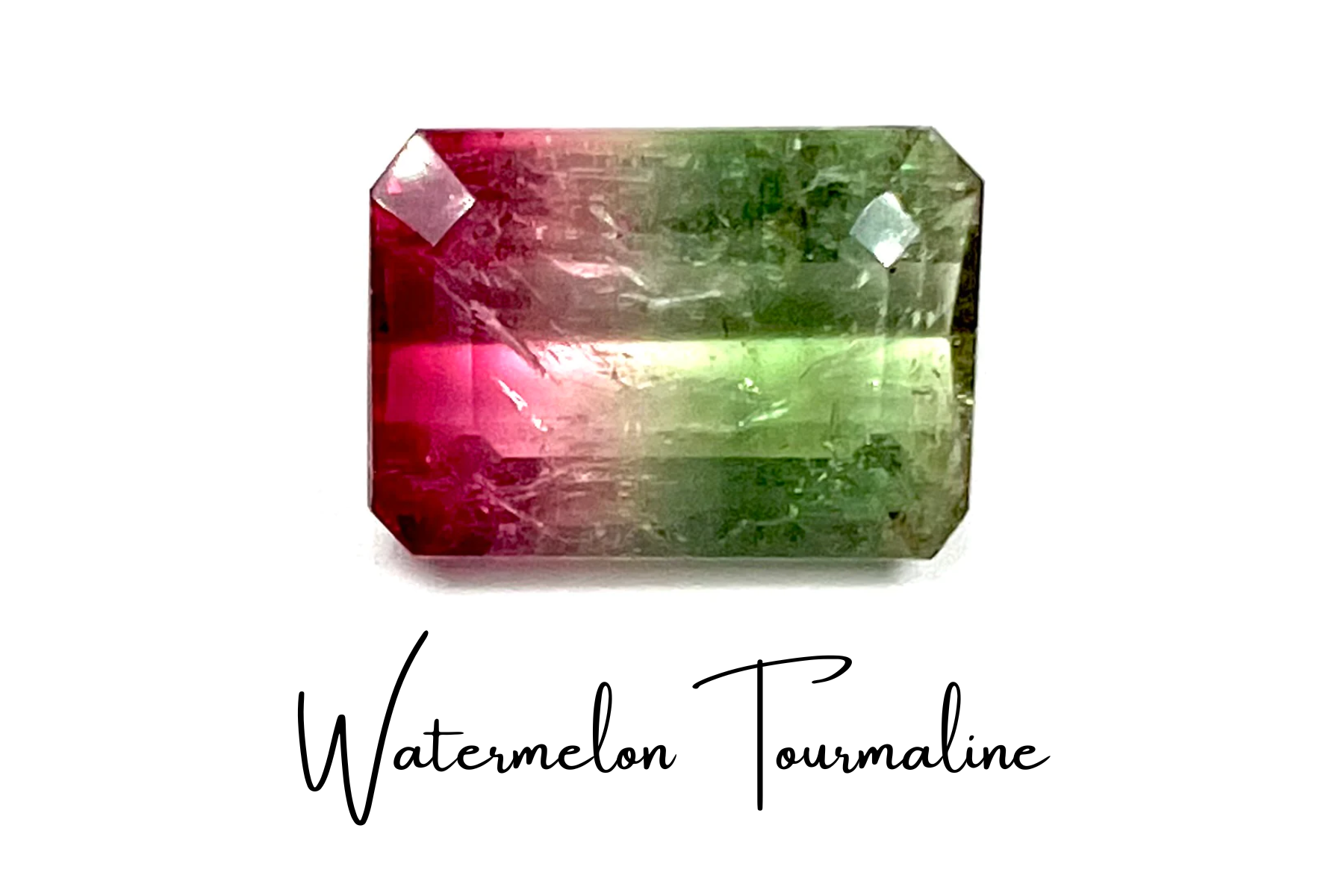 An octagonal watermelon tourmaline with color combination of pink and green

Watermelon tourmaline is a type of tourmaline with red insides and green outsides. This is called concentrically color-zoned tourmaline, which is different from longitudinal bi-color or polychrome zonation.

Hardness: With a hardness of 7–7.5 on Moh's scale, the watermelon tourmaline is a fairly durable stone for jewelry. Its bright colors also make it a favorite among designers.

Properties: The heart chakra is connected to watermelon tourmaline, which makes it good for cleaning and getting rid of blockages. The stone brings back balance and helps get rid of fears, which helps people be more creative and express themselves. It is thought to help people find love and work out problems in relationships. 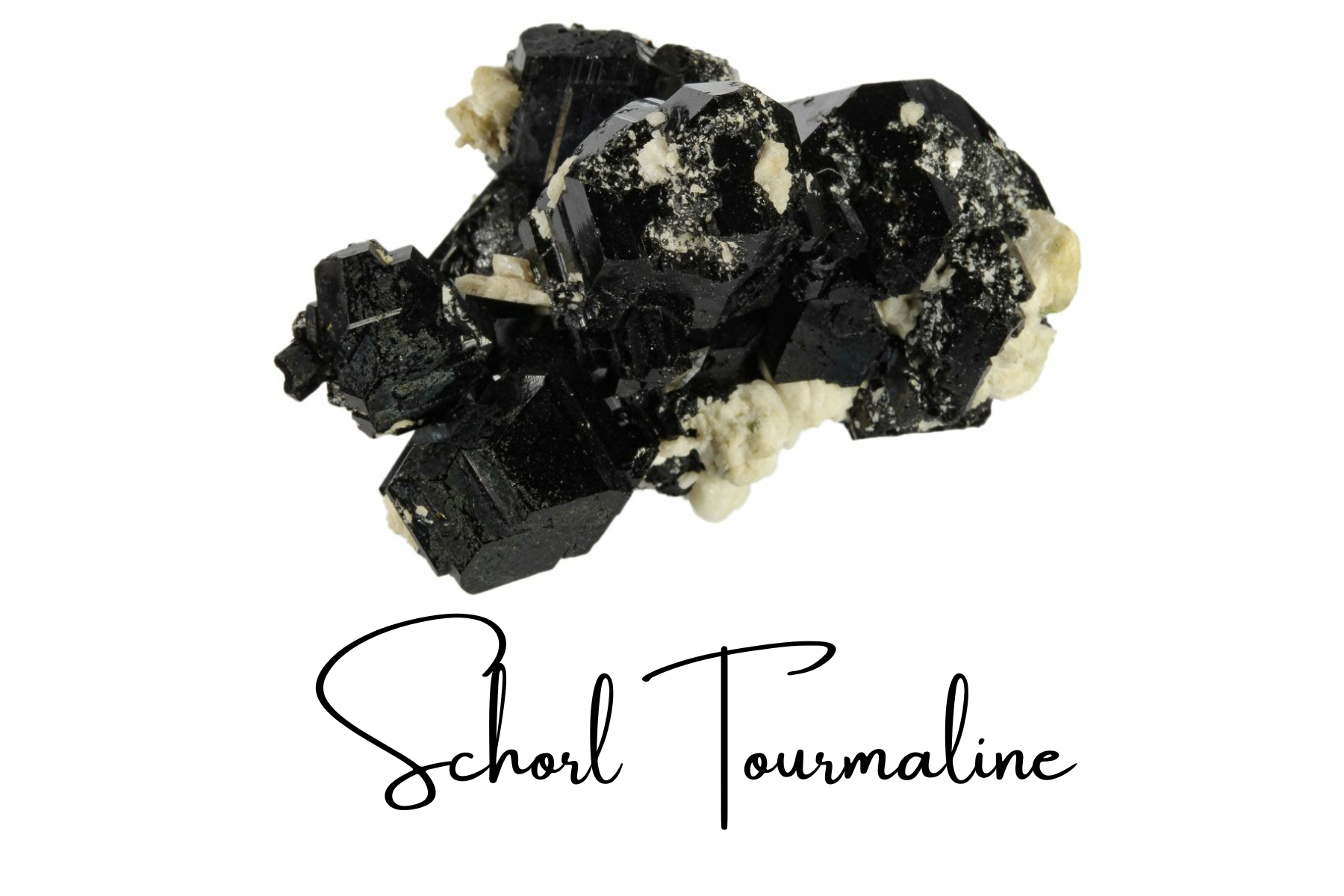 In a few rare cases, Schorls and Elbaite can grow together, making a specimen that is part Schorl and part Elbaite.

Schorl got its name from an old mining term for black tourmaline that was found in a tin mine in Zschorlau, a German village near the Western Ore Mountains.

Properties: Schorl (Black Tourmaline) is a great stone to protect you from negative energies, just like other black stones. It's best to use, though, to bring together feelings that are all over the place.

Tourmaline, in general, helps to create a shield around a person or a room so that negative or unwanted energies can't get in. It also brings you down to earth and helps balance all of your chakras.

Even challenging energy and negative thought patterns can be changed into more helpful energy and beliefs by the stone.

Which Tourmaline Is Best?

Bright, pure shades of red, blue, and green are usually the most valuable, but the electric bright green to blue shades of copper-bearing tourmaline are so special that they are in a class by themselves.

How Do You Pick Tourmaline?

In general, green tourmalines should not have any inclusions that can be seen with the naked eye. Pink, red, and blue tourmalines are more likely to have flaws. As long as the flaws don't make the gem less beautiful, they won't have much of an effect on the price.

Does Tourmaline Glow Under Black Light?

Tourmaline is sometimes referred to as a "rainbow stone" and the reason for this is because the color of the stone can vary greatly depending on the type being used.