The Best Jewelry Moments At The 2023 Golden Globes 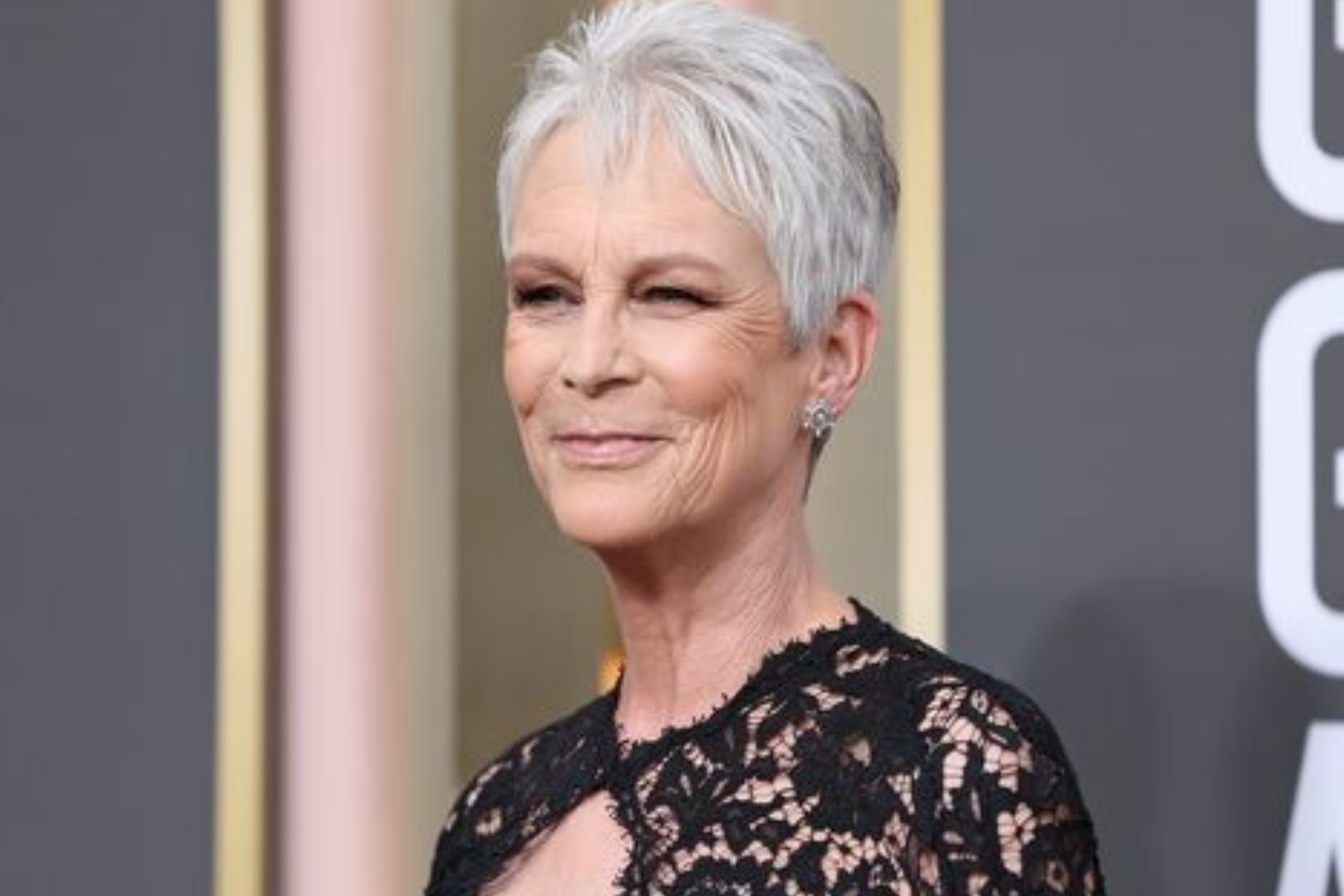 On the other hand, individuals who did decide to go all out displayed costly and magnificent diamond jewelry on the red carpet.

The ones that stood out the most were the stunning diamond choker worn by Michelle Yeoh, the structural wrap-around necklace worn by Michaela Jaé Rodriguez, and the youthful stacking of Tiffany & Co. pieces worn by Jenna Ortega. Michelle Yeoh won the award for Best Actress in a Motion Picture Musical or Comedy.

The Golden Globe Awards made a triumphant return to prime-time television on Tuesday night, following a more subdued online broadcast the previous year. As expected, the red carpet was a dazzling display of glitz and glamour.

At the star-studded gala that kicked off awards season, Hollywood's most talented actors and actresses showed up dressed to the nines in exquisite costumes and jewelry that stole the show.

It didn't matter which way you went, there was an abundance of sparkling diamonds, jaw-dropping gems, and, of course, plenty of gorgeous jewels worth millions of dollars in every direction.

Here is a deeper look at some of the biggest and brightest jewelry moments from the 2023 Golden Globes, including Jamie Lee Curtis's dazzling gems, Laverne Cox's extravagantly intricate accessories, and Michelle Yeoh's statement-making sparklers. 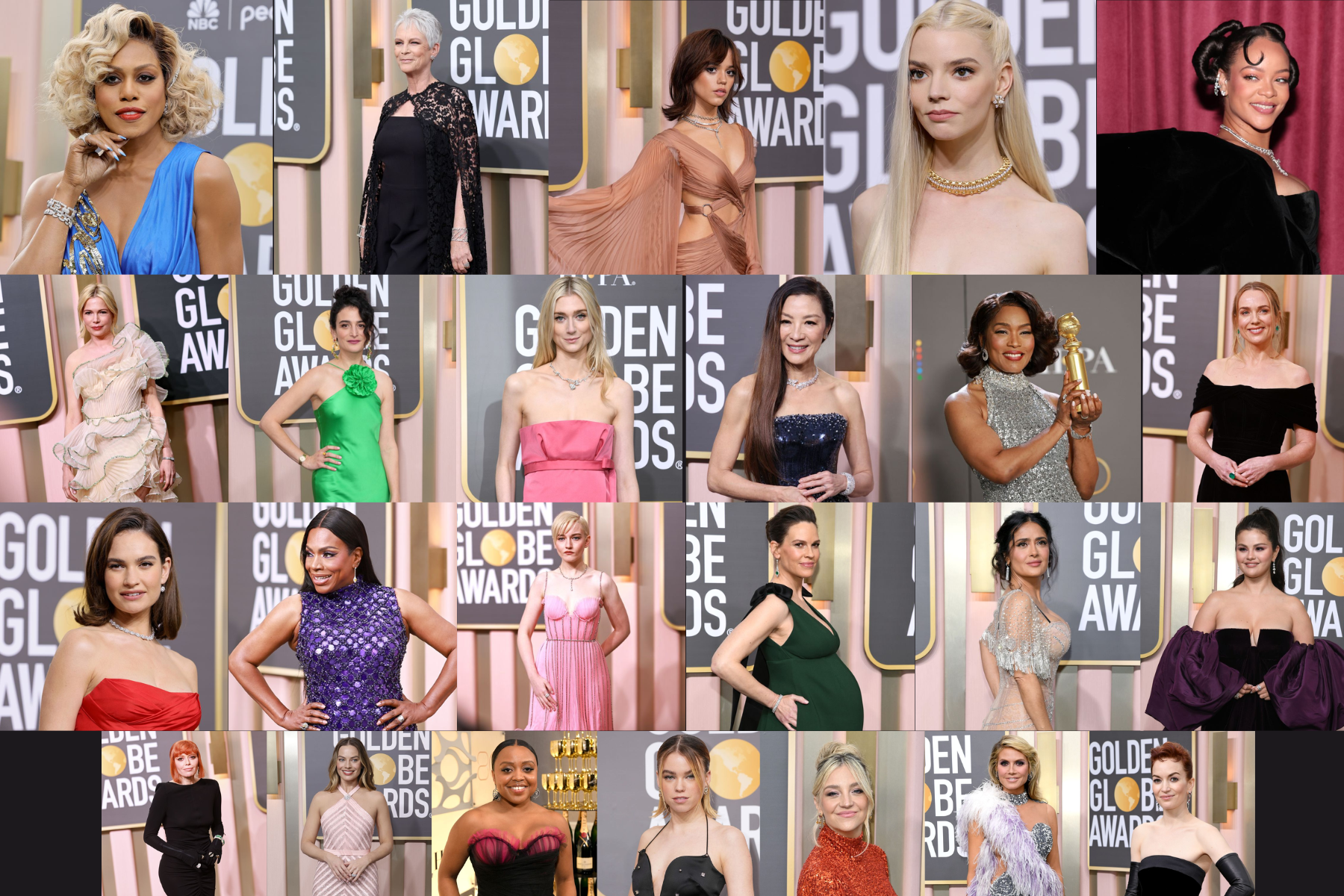 24 Hollywood actresses at the 2023 Global Globes

In a vintage blue John Galliano with gold detailing and jewelry from Fred Leighton and Kwiat.

To complete the look, she wore a black Safiyaa gown with a lace cape and jewelry by Cathy Waterman.

In a Gucci dress and Tiffany jewelry.

Dressed in a black Schiaparelli gown and wearing diamond REZA stud earrings together with a necklace and earrings by Cartier.

In a green Rodarte dress, an Omega timepiece, Anabela Chan earrings, and a Kallati Jewelry ring.

In a strapless pink Dior gown and jewelry also from the fashion house.

In a sparkly Armani Prive gown and diamond jewelry from Moussaieff Jewellers.

In a sequined Pamella Roland gown and Chopard jewelry.

Wearing a dress by Brandon Maxwell with an off-the-shoulder neckline and emerald jewels by Lorraine Schwartz.

In a red Atelier Versace gown and Harry Winston jewelry.

Wearing a custom-made purple dress by Aliette and jewelry by Natalie Mills.

In a pink Gucci dress and DeBeers jewelry.

In a Prada dress and Tiffany & Co. jewelry.

In a shimmering Gucci gown and Boucheron jewelry.

In a Valentino dress and DeBeers jewelry.

In a Givenchy dress and David Webb jewelry.

In a pink halterneck dress and fine jewelry, all by Chanel.

In a black and pink Christian Siriano gown and Neil Lane jewelry.

In an embellished Givenchy gown and Pomellato jewelry.

In a Pamella Roland sequin gown and jewelry by Dale Novick.

In a sequin feather Germanier dress and Lorraine Schwartz jewelry.

In a black and pink Bach Mai ball gown and ruby jewelry by REZA.

Should You Wear Red Jewelry For The Festive Season

The Lunar New Year is a holiday that is celebrated by Asian populations all over the world on a yearly basis. This holiday is accompanied by a variety of rituals and beliefs. The color red, however, is one thing that persists regardless of national boundaries, generations, or cultural practices.

The vibrant color holds a significant place in Chinese culture particularly, as it represents good luck, vitality, and prosperity. Stewart Young, director of jewelry and head of jewelry Asia at Bonhamssaid:

Legend has it that a beast known as a nian would emerge on Chinese New Year’s Eve to devour villagers, livestock, and crops. [Certain] villagers heard that the nian was scared of children dressed in red; since then, we [Chinese communities] have hung red lanterns and scrolls with couplets to keep the mythical monster away for another year. The nian dance, or lion dance, is performed every Chinese New Year’s Eve to ward off evil.