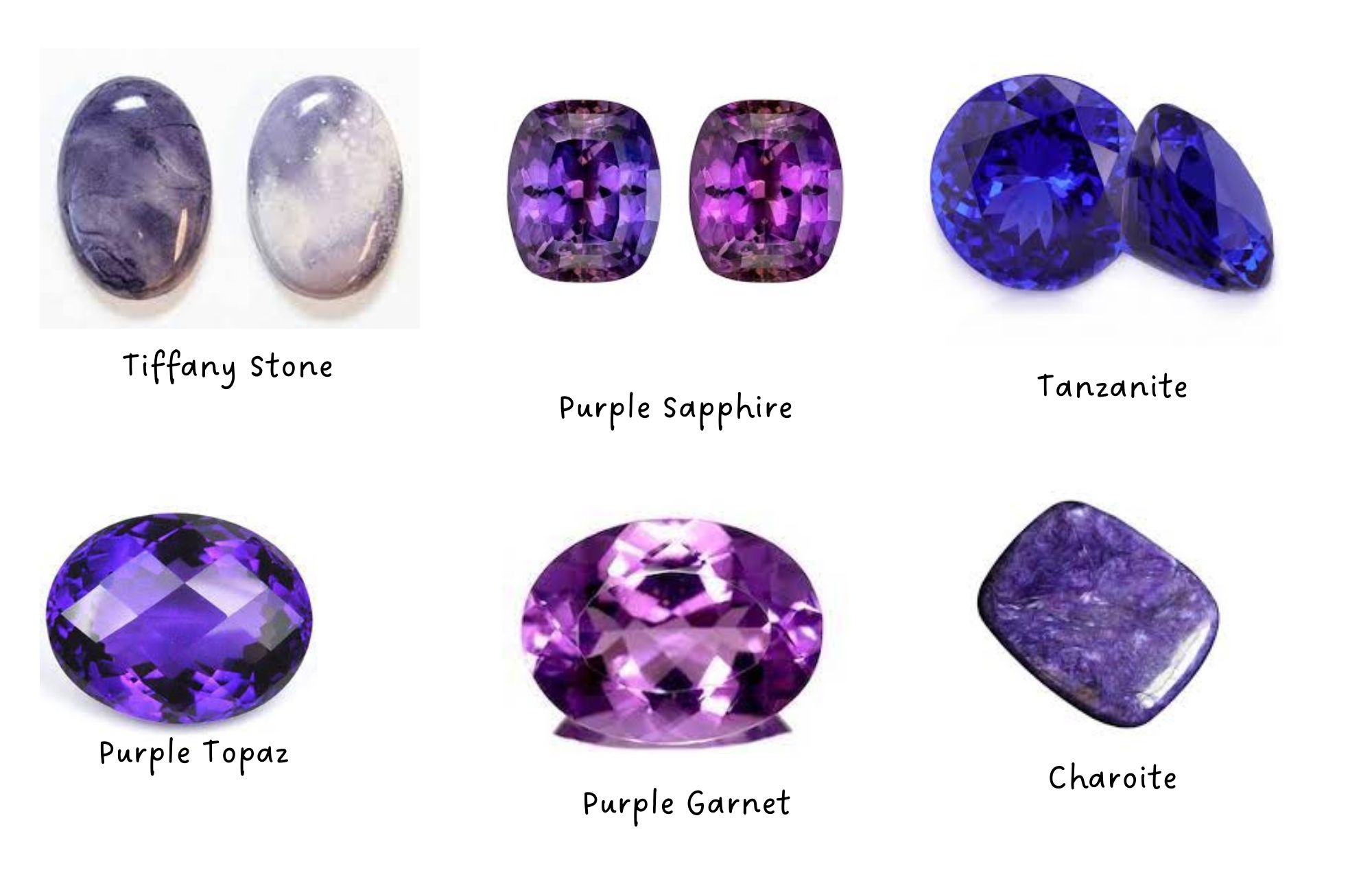 Purple gems have been a favorite for a long time, and for good reason. Some people find purple interesting, and the color is often linked to royalty, wealth, passion, power, luxury, ambition, and mystery. There's something about purple that attracts people in.

What Does The Color Purple Symbolize

As research affirmed: Purple is a color that represents strength, spiritual ambitions, passion, leadership, respect, and riches. Emperors and military commanders have worn it because it is relaxing, rejuvenating, and pacifying. It's also come to represent psychic ability, achievement, knowledge, and self-sufficiency. Purple was originally considered a regal color in Europe.

And it is also stated the people wearing purple gemstone jewelry is are increasing a person's kindness while also boosting creativity and inner strength. Purple is also a good color for enhancing artistic abilities and knowledge.

It comes in a lot of different colors, like amethyst, lavender, lilac, magenta and more. Purple gem stones can also be found in jewelry.

Amethyst, sugilite, tanzanite, jasper, garnet, and garnet are some of the purple stones shown in the pictures below.

This article will give you more information about a gemstone.

Tiffany Stone is the trade name for a variety of Fluorite. This stone is known by many names, including Bertrandite, Beryllium Ore, Purple Opal, Purple Passion, Opal Fluorite, Ice Cream Stone, and Purple Bertrandite.

Purple Sapphire, also known as "Violet Sapphire" or "Plum Sapphire," is a kind of precious gem that comes from the Corundum mineral family. It is the kind that is blueish purple to purplish pink in color. Astrologically, this gemstone is thought to be the most powerful form of Blue Sapphire (Neelam).

I included this gem, although Tanzanite is a type of zoisite that is blue or purple, it is still considered a purple gem because it is more purple than blue.

It is named after Tanzania, the country where it was first found. "Trichroism" is what makes it stand out. This means that when you turn it in the light, it changes color from blue to violet.

Purple topaz begins its life as a colorless stone, also known as white topaz. These gemstones can be found all over the world. I also put this one because it is rare to see a purple topaz, and we should all appreciate it.

Purple Garnet is a rare type of garnet that can only be found in East Africa, and it's purple. The best material, which comes from Mozambique, has a vivid purple color with a few red hints. The color of these very rare gems can change from grape to cranberry with hints of magenta.

Who else will forget this lovely one? Amethyst is a rare and well-known gemstone all over the world! Because of its fame, it has also been used as the name of a television character!

The purple form of quartz, amethyst, is the most valuable member of the quartz family. Amethyst must be purple, but it can come in a variety of colors, including deep purple, light lilac, lavender, and mauve. Amethyst of the highest quality is a deep medium purple with rose-colored flashes. For thousands of years, its purple tint made it a stone of royalty.

What Are These Purple Gemstones Good For

According to some stone experts and researchers, purple gemstones, help us connect with a higher level of consciousness and have a strong transformative power. They work to enlighten and awaken us while also bringing us greater peace. They also believe that it stimulates our minds on both conscious and subconscious levels, and that these gemstones are extremely calming.

However, there is no scientific evidence to support this claim. In relation to this article, do you know that gems don't have anything inside of them that controls any parts of us? That's actually the truth.

So, just use it for your own collection or your preferred style.

How To Choose Purple Gems For Jewelry

It's time to figure out how to pick the best one for yourself now that you know all about these beautiful stones. Check out the following:

Each gemstone has a different level of hardness. Look at how the stone does on the Mohs scale. Fluorite is a soft stone that is easy to break, so it should only be worn on special occasions. A durable gem, like a diamond, is the best thing for you to wear every day.

It can be hard to tell which purple gemstones are which because they come in many different shades and tones. Color is important when it comes to some gems, so keep an eye on this. It is known that iolite stones can change color. Amethysts in dark purple are the most sought-after.

This is the most common way to show how good something is. They say "carat" when they say how much weight they have. Size does not affect the quality of your stone, but it can often raise the price. Make sure you know how many carats the diamond is and if there are any inclusions or flaws.

Some cuts happen more often than others. In this case, an oval shape will evenly distribute the gemstone's weight while still keeping the gem's beauty and sparkle. Some people may not think that the cut is a good way to tell if something is good. It can also depend on how a stone is cut, because the shape changes how light hits it.

Stone with a lot of unique shapes

Many gemstones are cut and polished before they can be sold to people. It's not all of them, though. Because of the patterns and colors they show, some remain in their natural state.

How To Care For Your Gems

For its sparkle to last, a gem needs to be kept clean. In order to do this, you can soak it in two cups of water, a tablespoon or so of dish detergent, and a little ammonia. You can then gently brush it to get rid of dirt. If there is still soap left on your skin after you've done this, dip it in alcohol to remove it. A soft, absorbent handkerchief can be used to let the clothes dry while they are still wet.

All About Purple Gemstones

We pinpoint the varieties of purple stones that are now in popular in today's society, Additionally, we discussed the meaning of these terms according to professionals. However, they lack credible evidence to support this statement.

Important note to remember: A person who believes in the power of magical amulets and lucky charms gives up control of his life to unseen forces.