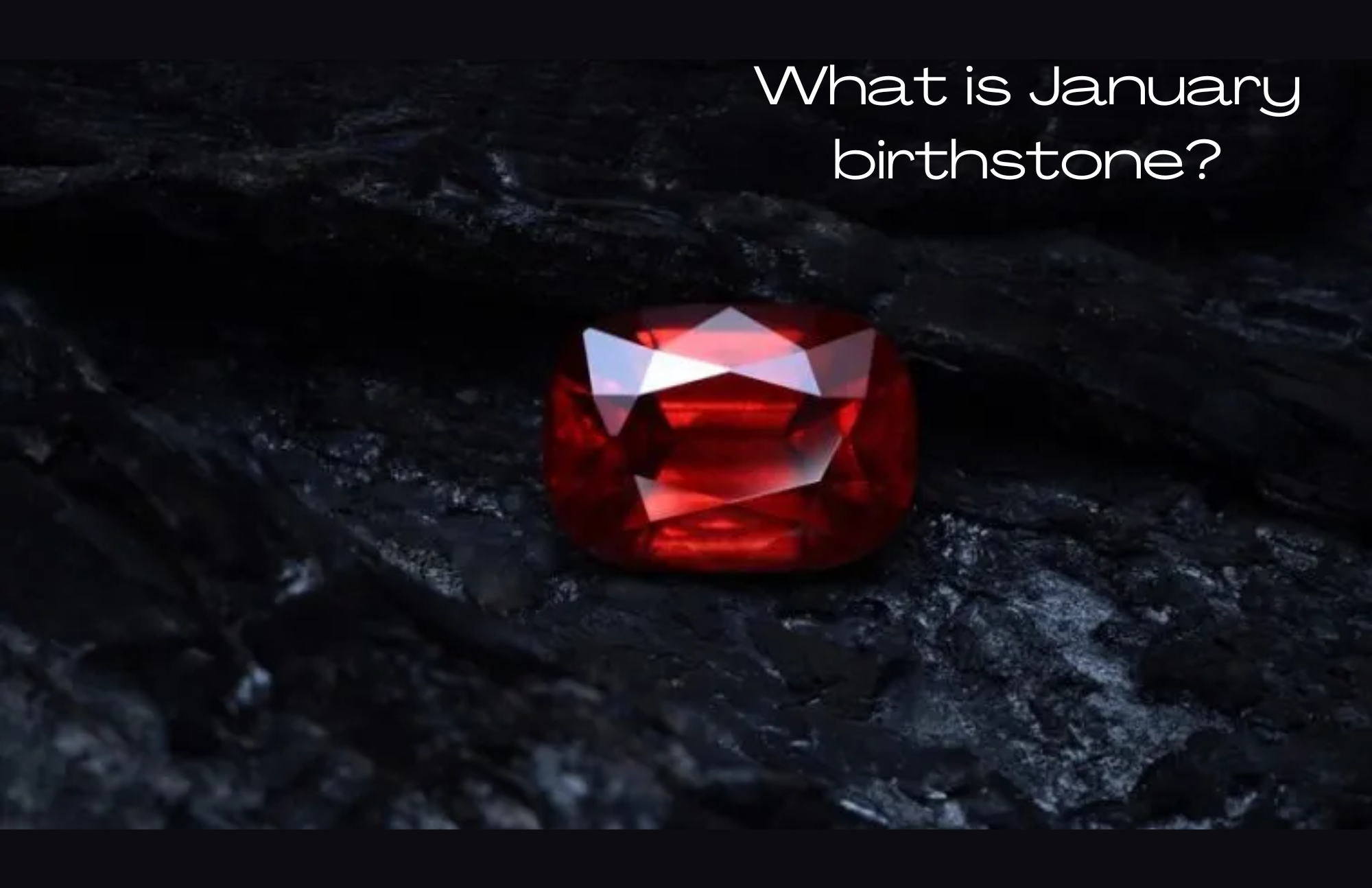 When January rolls around and makes its way directly into your existence, you are going to require something that is both valuable and appealing to begin your life with.

One thing you need to have is a gem. Gems that are symbolic of a person's birth month are called birthstones.

These stones are named after the month in which the individual was born.

What is January birthstone? Let's find out!

The Birthstone For January

Garnet is the birthstone for January and is a stunning and one-of-a-kind gemstone.

Yes, Garnet is the traditional birthstone for those who were fortunate enough to be born in the month of January.

Garnets are stunning stones that are normally a deep red color but can also be a reddish-orange color.

You might even come across ones that are yellow or emerald green in color.

History Of The Garnet

This information is according to some historical facts. January's birthstone which is Garnet is also the gem that is worn to commemorate the second wedding anniversary.

In the 18th and 19th centuries in Europe, garnets had a significant amount of popularity.

During the Victorian era, they were often employed for the creation of jewelry.

In the days of Old Spain, the pomegranate was quite popular, and as a direct result of this, the garnet was as well.

In the ancient Indian practice of astrology, the birthstone associated with the month of January was said to have the power to dispel unfavorable emotions and replace them with feelings of self-assurance, mental clarity, and innovative thought.

There is also the belief that wearing this gemstone will protect its owner when they are on the road.

The Root Chakra is stimulated and brought into balance by the use of garnet, which also purifies the blood and maintains heart health.

Garnet's benefits are endless. It improves the functionality of the lungs and spleen, and it also heals injuries to the spine.

Additionally, it has antidepressant properties and, according to some old beliefs, wearing a garnet stone offers protection against the effects of poison.

Location Of The Birthstone

The Garnet gem can be found in many different parts of the world. However, the continent of Africa is home to the largest modern source of garnet.

In contrast to this, garnet that was mined throughout the Victorian era and the early 19th century came from the Ural Mountains in Russia and Bohemia. Both of these locations are in Eastern Europe.

Green garnet, which is often also referred to as "tsavorite," is a popular gemstone that is mined extensively in Kenya, Tanzania, and Madagascar.

Namibia is a major supplier of vivid green demantoid garnet, while Kenya, Tanzania, and Madagascar are major exporters of green garnet.

Spessartine garnets, with their alluring orangish-yellow coloration, can also be found in Namibia and Tanzania.

In addition to being found in certain regions of the United States, Myanmar, Brazil, Iran, Afghanistan, Pakistan, India, and Sri Lanka are also home to garnet deposits.

The Trending Jewelry Made Out Of Garnets In 2022

These are the pieces of jewelry made out of Garnet birthstones that you will love. 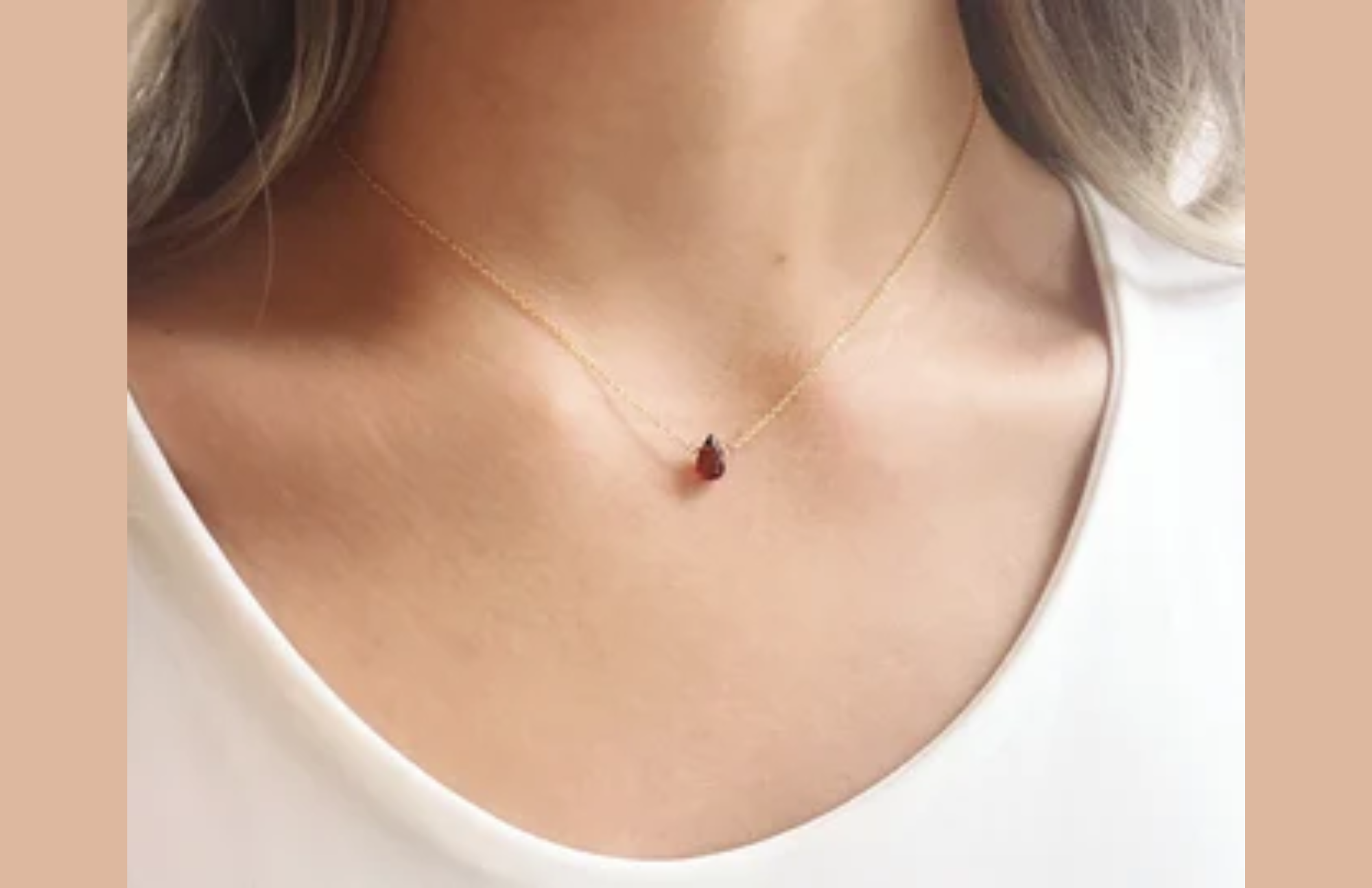 This genuine teardrop-shaped garnet has several facets and hangs from a delicate chain.

The month of January's birthstone is the garnet. This delicate necklace is perfect for day-to-day wear because of its low weight.

Additionally, it is the ideal component for creating a layered effect with other necklaces. The necklace has a lovely finishing touch in the form of a clasp, which is decorated with tiny seed pearls.

The model is sporting a gold-filled garnet necklace about 16 inches in length. 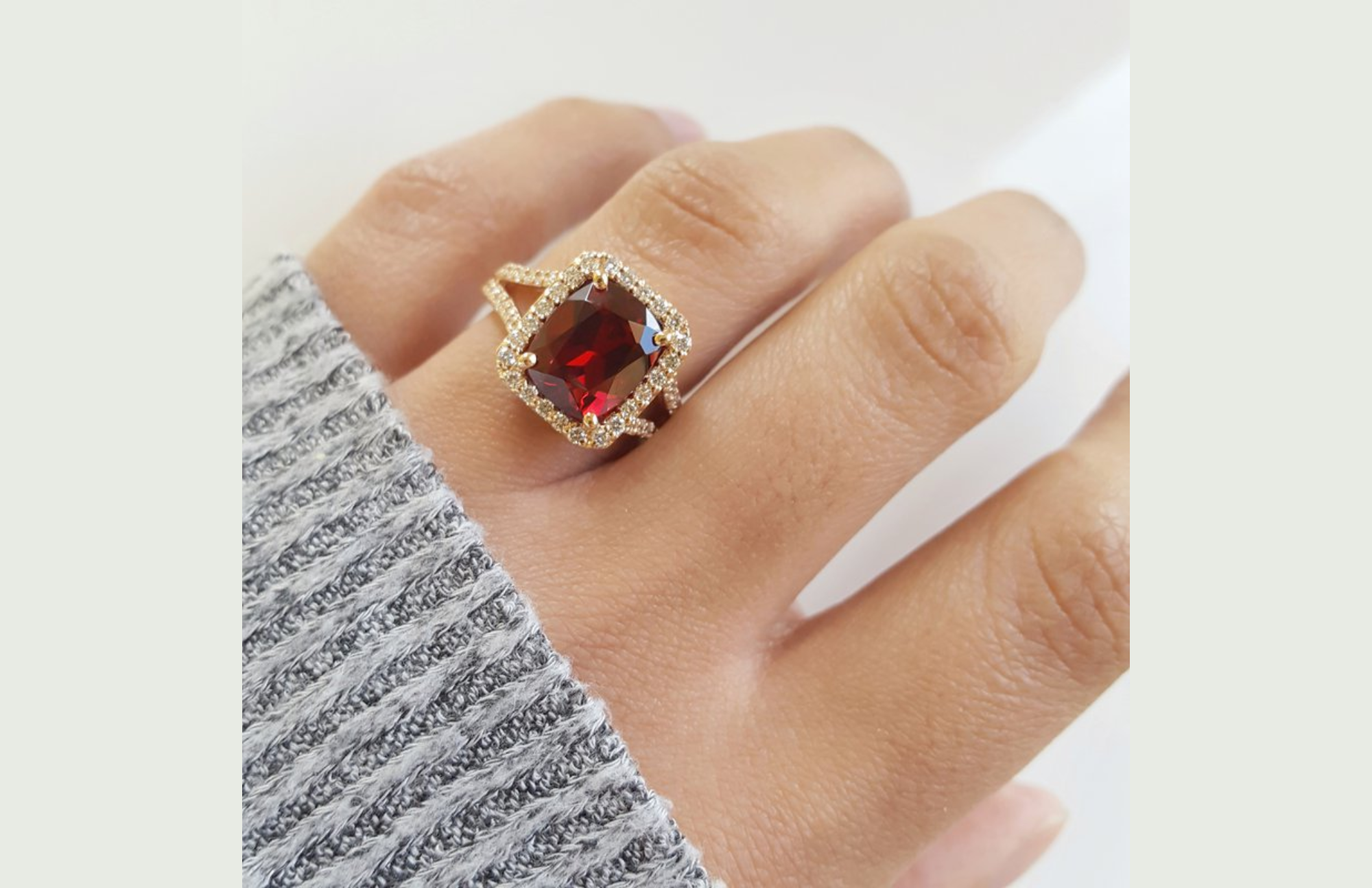 14k rose gold with a real garnet in an extended cushion shape measuring 4.90 carats on a woman's ring finger

Indulge in the allure of the rhodolite garnet's alluring appearance! This stunning ring is made of 14k rose gold and has a genuine garnet with an elongated cushion cut weighing a staggering 4.90 carats.

The radiant pink-red jewel is encircled by a halo made of diamonds, and the glittering stones continue down the band to provide more flair.

The total weight of the diamonds is one carat. 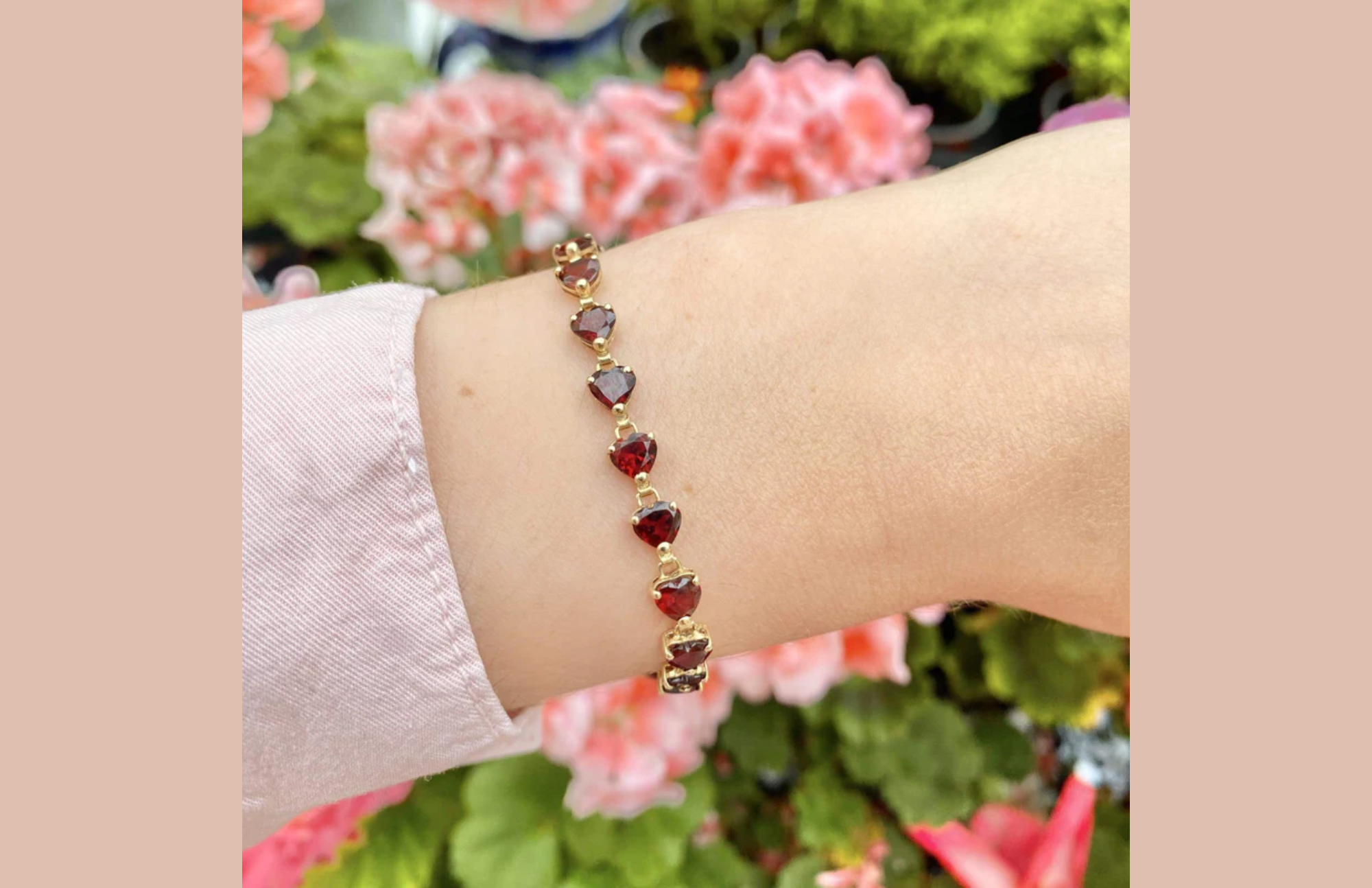 Garnets are the birthstone of January, a beautiful deep red gemstone with exceptional sparkle.

The particular variety of garnet that you are interested in purchasing will determine the garnet's level of rarity.

The popular garnets with a deep red color are far more widespread.

You are in luck if you are seeking a more unusual variety of the birthstone associated with the month of January.

Garnet can be found in a wide variety of colors and textures depending on where it is mined. This historically significant gem is associated with the month of January and its birthstone. 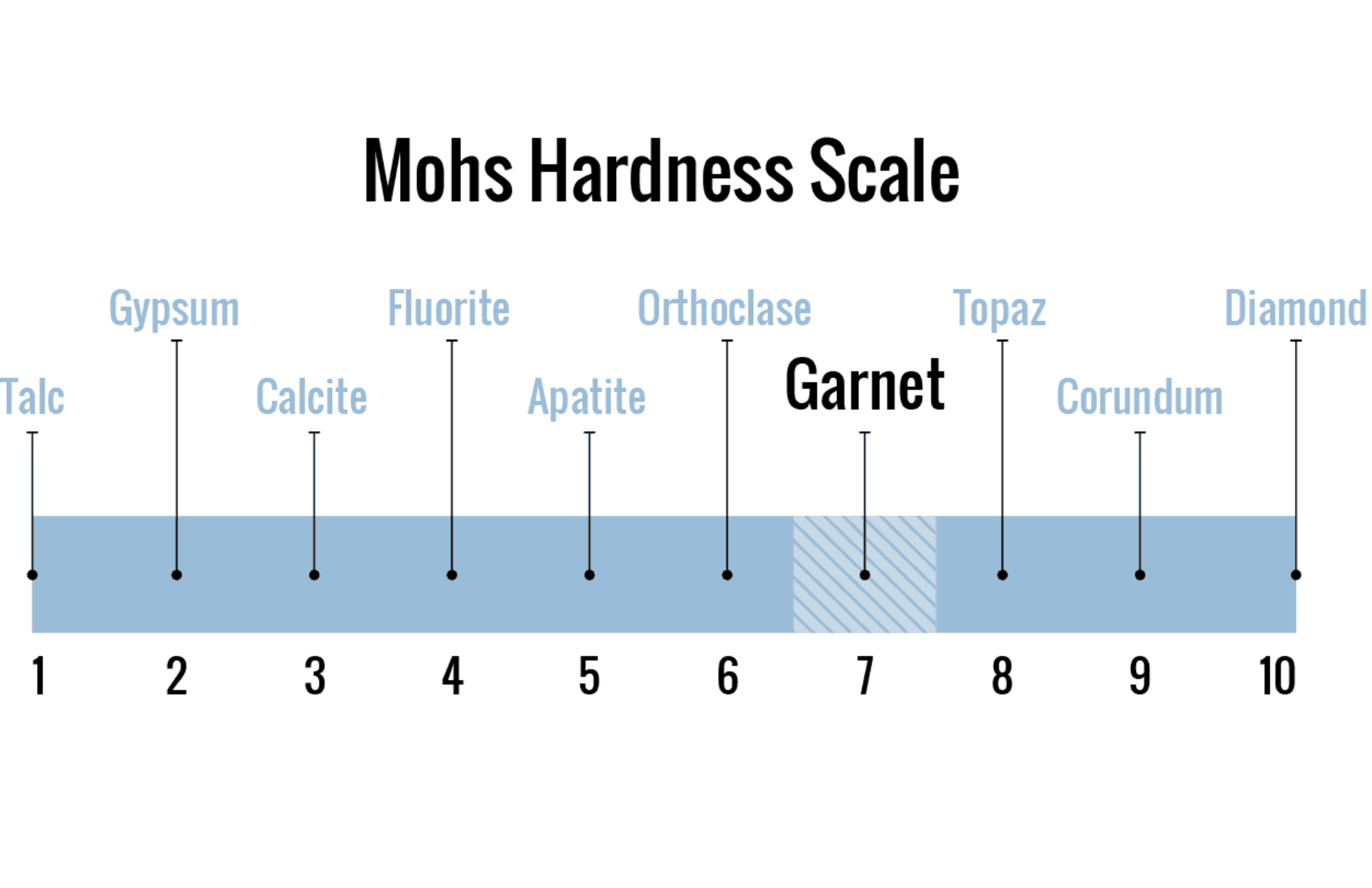 Garnet's hardness stand out among the other stones

On the Mohs scale, which ranks the toughness of different minerals, a garnet rates between 6.5 and 7.5 for its level of hardness.

To put that into perspective, the hardness of a diamond is 10. Garnets are among the softer types of gemstones, therefore they are more prone to being scratched or otherwise damaged.

Garnets, on the other hand, look fantastic and will last for a longer period of time whether used in straightforward jewelry items like earrings or necklaces or when used as an accent stone to your lab-grown diamond center stone.

Gifting someone with garnet, whether it be for their birthday in January or just because they adore the way it looks, is a wonderful idea.

Garnets are currently not offered for sale by Clean Origin; nevertheless, one needs just look to a number of other internet sellers to locate them.

The region of the sacral chakra Garnet, which resonates with the second chakra, known as the Sacral Chakra, aligns the wearer with riches and prosperity, and safety, and it enhances relationships in many different ways, across many different levels.

How To Wear A January Birthstone?

Wear garnet studs for a subtle yet stunning look that can easily transition from day to night.

If you want arm candy, go for a bracelet with garnet stones.

Alternatively, you can personalize your outfit with a charm bracelet that includes a zodiac charm with your birthstone of choice.

The price of garnet stones can vary greatly due to the wide range of colors that are available in which to purchase them. They typically start at about $500 per carat for stones that have inclusions and can go up to about $7,000 per carat for larger stones that are flawless. The most valuable variety of garnet is called demantoid, and its price is typically at the very top of the range.

Which Finger Should Garnet Be Worn?

Ruby or garnet should be worn on the thumb at all times. The strength of the index finger is inside itself. This particular finger is symbolic of leadership, authority, and power. In days gone by, monarchs and kings would traditionally wear a ring on this finger since it was considered to be the "finger of warning" and "finger of instruction."

What Are Garnets Powers?

Garnet, the birthstone for January, is not only stunningly gorgeous but also equipped with a number of benefits that you would like to learn more about. You should consider purchasing one of the pieces of jewelry that you read about in this article so that you can take advantage of its many qualities.