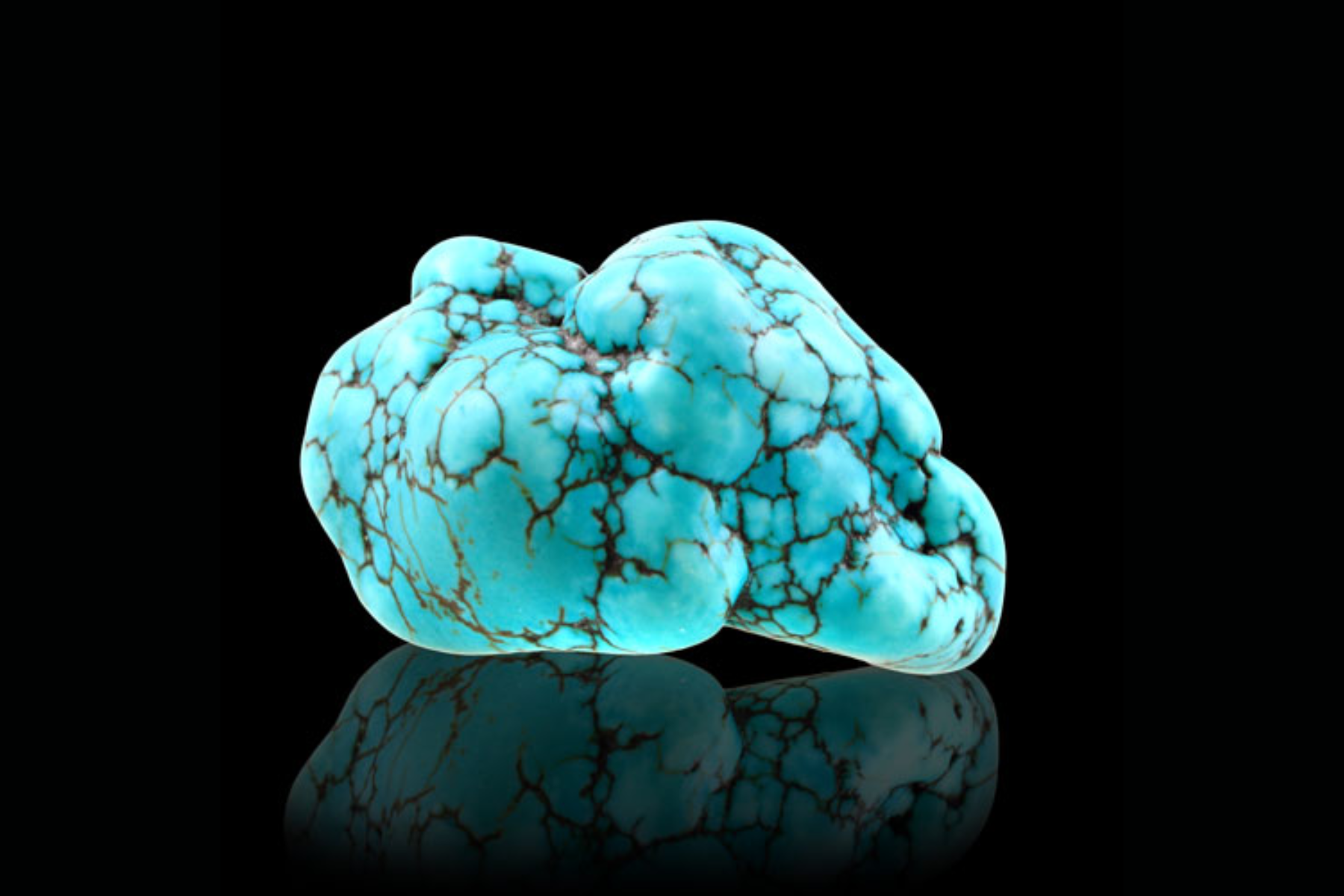 Due to the amazing and calming quality of its gentle blue tone, turquoise, a type of blue gemstone, has been adored for a very long time.

It is simply designed to look like the color of clear ocean water, which quickly puts people in a calm state of mind.

For those who want to know whether it's just one ordinary type of gemstone or whether it also has a variety, I would be glad to show you the different types of turquoise and what is beautiful about them.

Solid and ranging in color from blue to green, turquoise is a mineral that is composed of copper and aluminum in the form of a hydrated phosphate and has the chemical formula CuAl6(PO4)4(OH)8·4H2O.

Because of its one-of-a-kind color, it has been highly prized for use as a gemstone and ornamental stone for thousands of years.

Its rarity and value increase with the quality of the stone.

As science stated, it has been highly prized for thousands of years, that's true because turquoise is a popular gem that has been valued for a long time in many places.

It is one of the December birthstones and is thought to bring good luck, peace, and protection.

Turquoise stones are just beautiful because they are blue.

They also have a lot of other meanings.

These five types of turquoise are the ones that you should be familiar with. 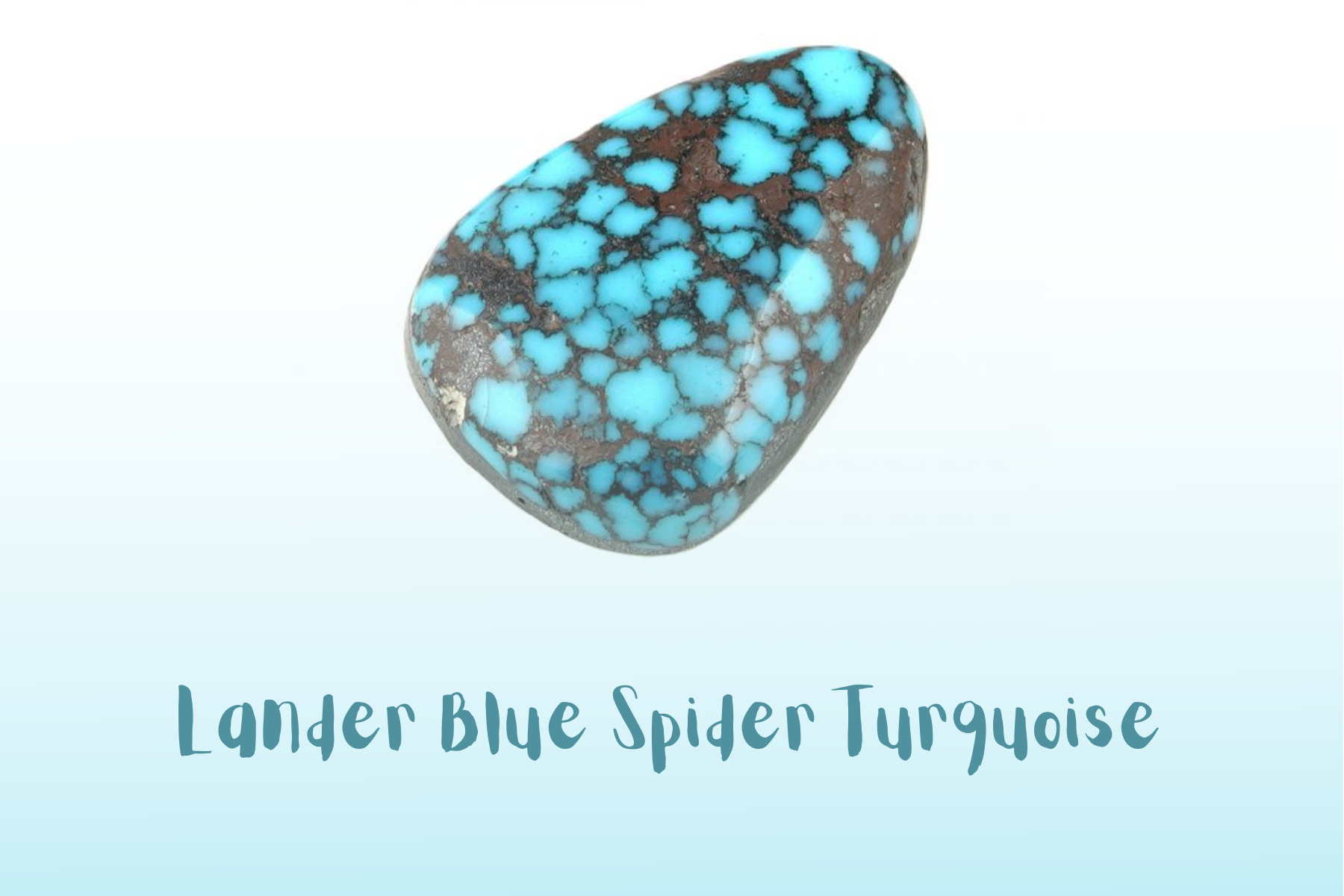 A lander blue stone with a spider web pattern

Lander Blue Spider Turquoise is a variety of turquoise that is mined in Northern Nevada close to the Lander Blue Mine.

It is clearly different from Lander Blue Turquoise in that it ranges in color from green to yellow-green and commonly features a stunning dark spiderweb matrix, that's why there is a spider word on its name.

The wild patterns and color characteristics of New Lander are well-known throughout the world.

It was discovered in 1973 and it produced some of the most magnificent spider-webbed turquoises that have ever been found.

It is currently considered the most valuable turquoise that has ever been discovered!

This lovely stone is incredibly valuable due to the one-of-a-kind and classic appearance it gives. 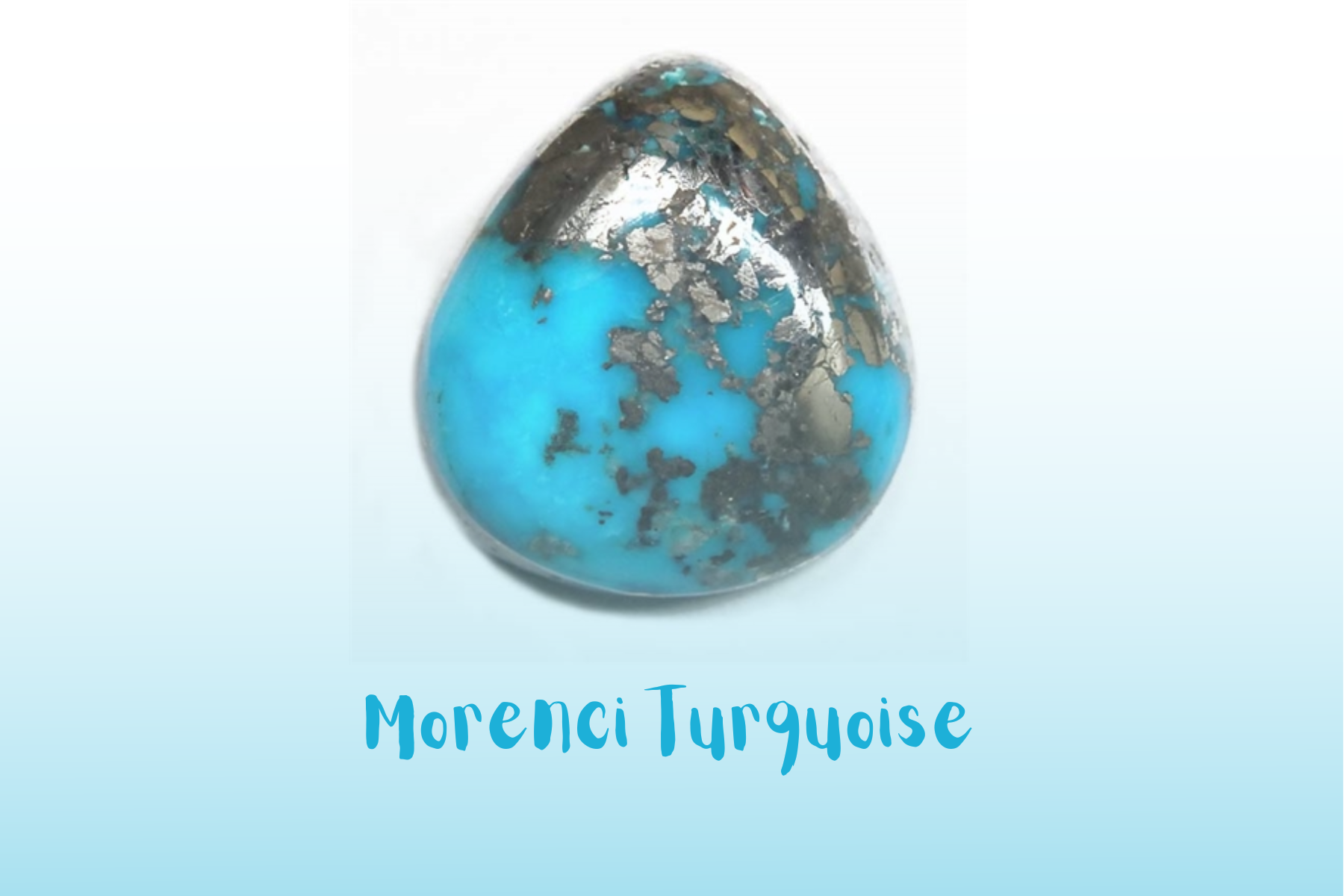 Another American classic that is held in very high regard and is particularly prized after by collectors is Morenci turquoise.

The Morenci turquoise mine produces turquoise in a wide variety of colors, ranging from blue to green.

However, the color that is most desired after is a deep blue tint with a heavy iron pyrite matrix and, on occasion, some spider-web inclusions.

Morenci turquoise is mined in southeast Arizona, close to the state line with New Mexico.

It is famous for the unusual pyrite matrix that it contains.

The Morenci Copper mine is where the stone got its name, and its color ranges from light to bright blue.

This Morence turquoise, which features a matrix of "look at me" pyrite is the stone to go for if you're looking to add some glitz and glamour to your life! 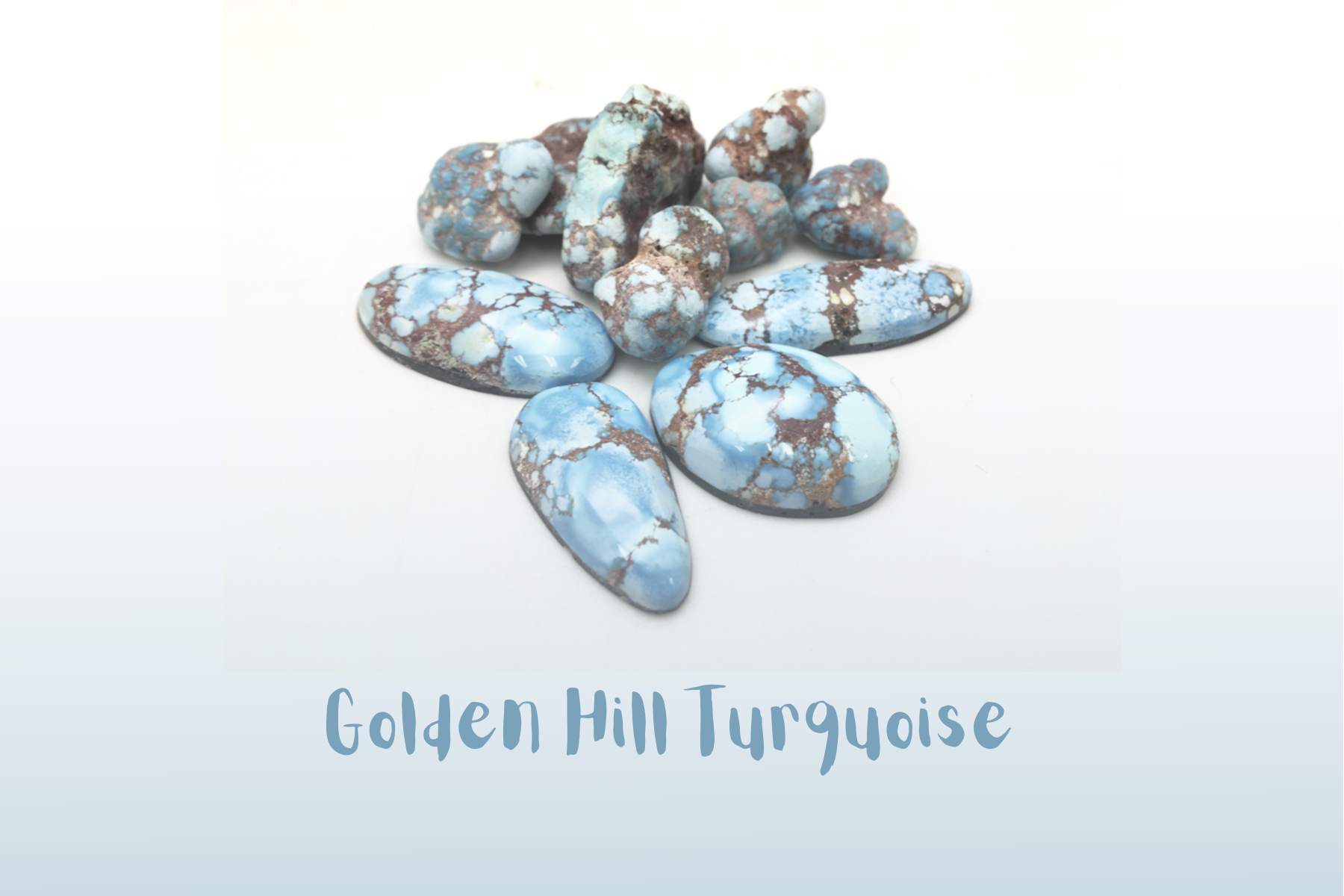 The Golden Hill Turquoise deposit can be found in the Altyn Tyube mine in Kazakhstan.

This particular color of turquoise is quite rare.

These magnificent gems have a hint of light blue to them and a matrix that is a reddish, burnt umber color.

It should not come as any kind of surprise at all that its price point is pretty high up there in comparison to others in its industry given that it is both popular and in high demand in the market.

For those who are obsessed with Turquoise, Golden Hill Turquoise is undeniably an essential purchase.

The most valuable of the three different varieties found at Mineral Park is this stunning rock.

It is famous for having such a deep blue color, and it includes deposits of both iron pyrite and quartz.

Due to the fact that it can command a higher price, a quality piece of Kingman Turquoise will frequently be referred to as Ithaca Peak.

This wonderful stone was collected from one of the world's most increased and historic turquoise mines.

Mohave country is in the western part of Arizona, and it was the site of the early discovery made by prehistoric Indians about a thousand years ago.

Today, the mine produces all different colors of turquoise with the matrix typically being white in color. 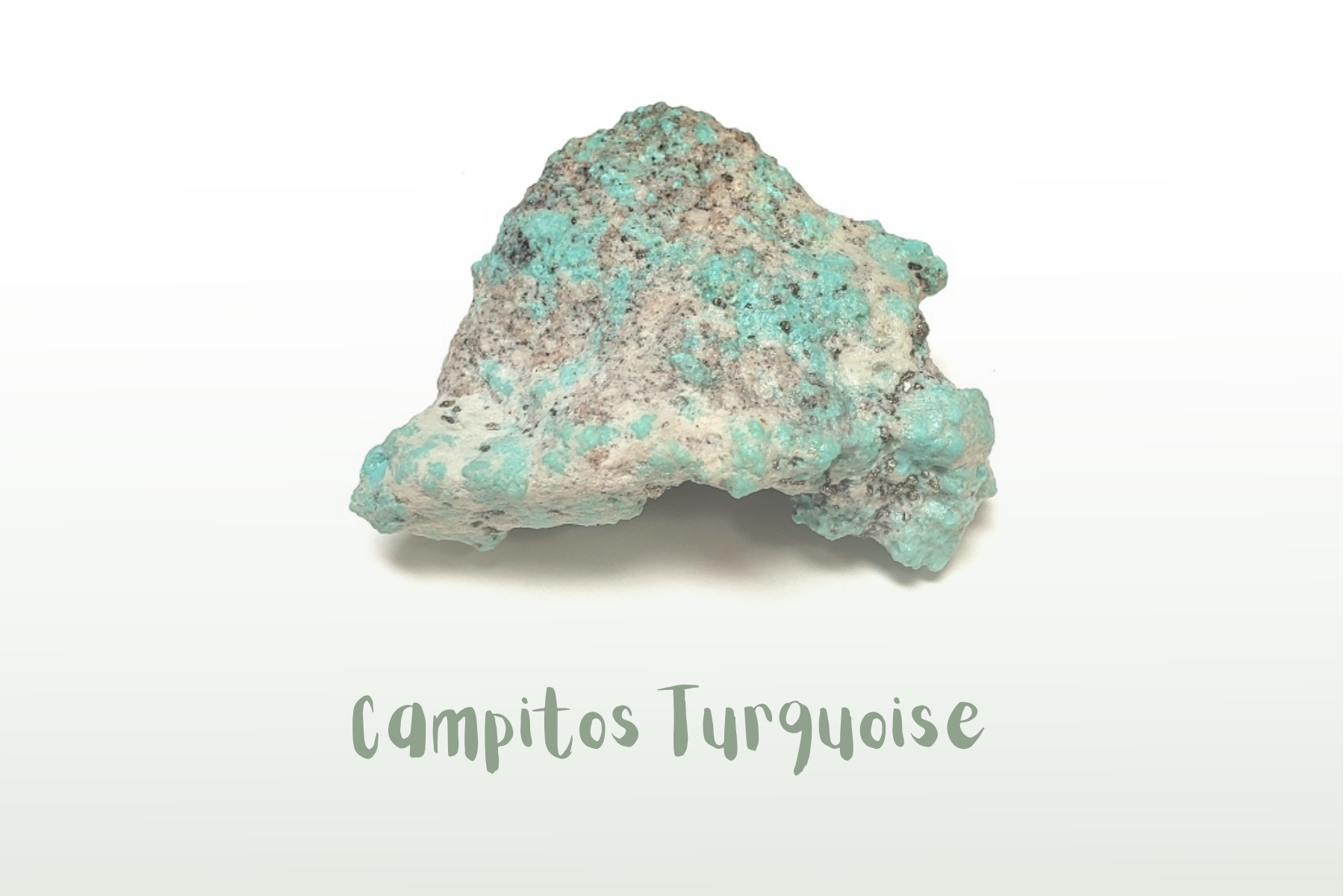 A campitos turquoise rock with sky blue and gray shades

The Pino Chieko and Cananga mines in Sonora, Mexico provided the raw materials for the production of Campitos turquoise.

Due to the fact that it forms in clay as free-form nuggets rather than as veins, this turquoise is truly one of a kind, like most types of turquoise.

It can range in color from light to medium blue and frequently possesses pyrite markings, which lend it a glittery appearance.

This particular piece of turquoise is mined in the Campitos mine in Sonora, Mexico, has a transparent and glittery appearance, and is similar to the mysterious shades of Sleeping Beauty.

How To Identify Types Of Turquoise?

The scratch test is the best way to tell if something is real turquoise.

Howlite and other stones used to make fake turquoise are softer than real turquoise.

Scratch a less visible part of the stone, like the back, with your nail.

If it scratches easily, it's howlite.

How Many Types Of Turquoise Are There?

When asked, most people can probably picture what turquoise looks like in general, but there are more than 30 different kinds of turquoise that are often used in southwestern jewelry.

Where Is The Best Quality Turquoise Found?

The states of Arizona and Nevada in the American Southwest have historically been home to the majority of the world's best turquoise deposits, despite the fact that turquoise has been mined across the whole of North America for hundreds of years.

Mines for the opaque blue gemstone can be found in San Bernardino and Inyo Counties in California, making this state another popular source of precious stone over the years.

Why Does Turquoise Turn Green?

Because even completely natural turquoise has some pores, it is possible for substances such as oils, soaps, and other chemicals to absorb the stone and cause a change in color.

The pores in the stone will even be able to absorb the natural oils that are produced by the skin, which will eventually cause the stone to turn a bluish-green color.

The different types of turquoise are fascinating, and their vibrant colors appeal to everyone.

Now that you've learned about the various types of turquoise, you can start collecting turquoise pieces or jewelry items and label them as a good buy.