Toughest Gemstones - The Unbreakable Beauty Of Diamond, Sapphire, And Ruby 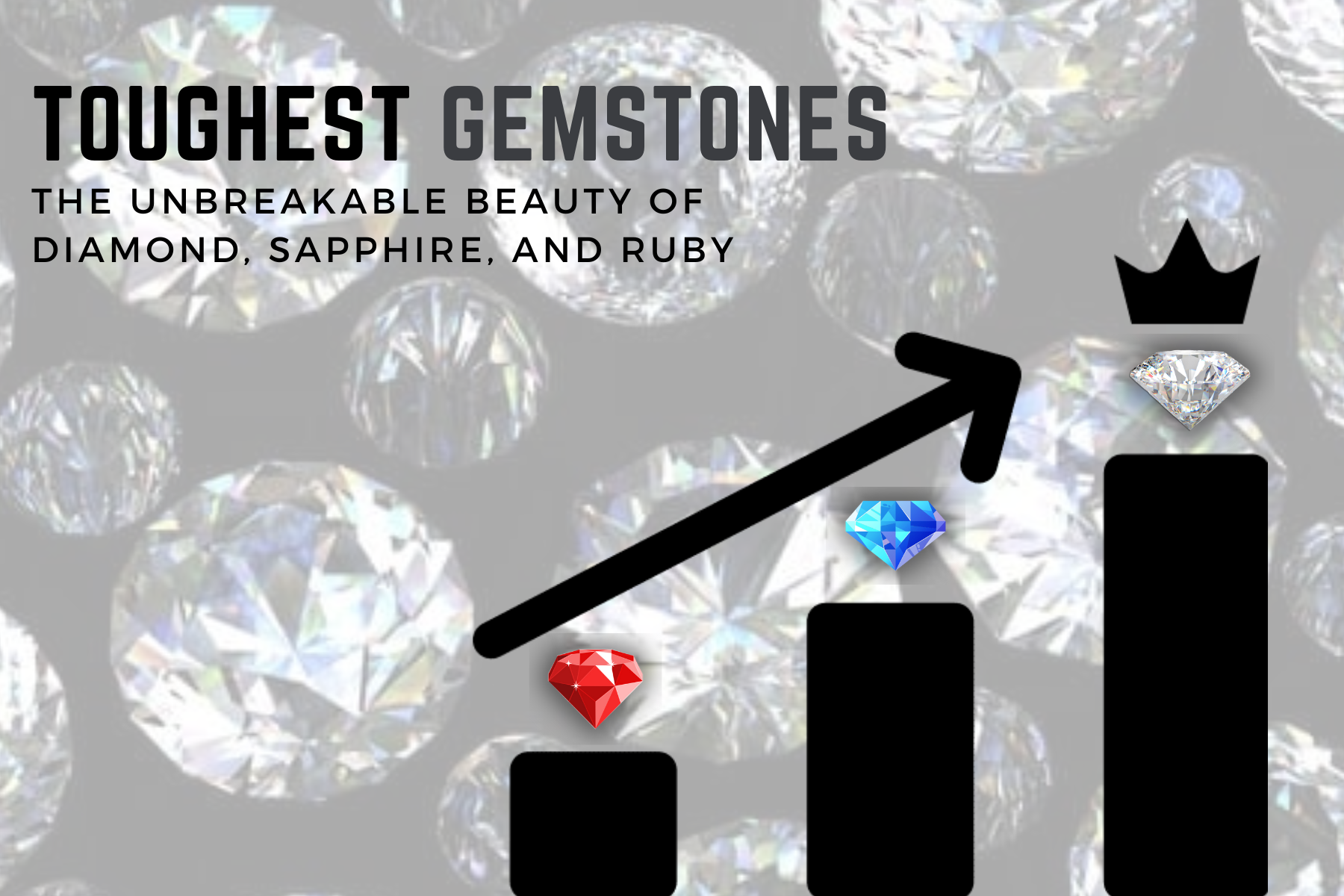 Shining bright and beautiful, gemstones have captivated humanity for centuries. But take note that not all gemstones are created equal. From durability to rarity, some gemstones stand out as the toughest of them all.

Let's take a closer look at the toughest gemstones that are known for their strength and endurance. 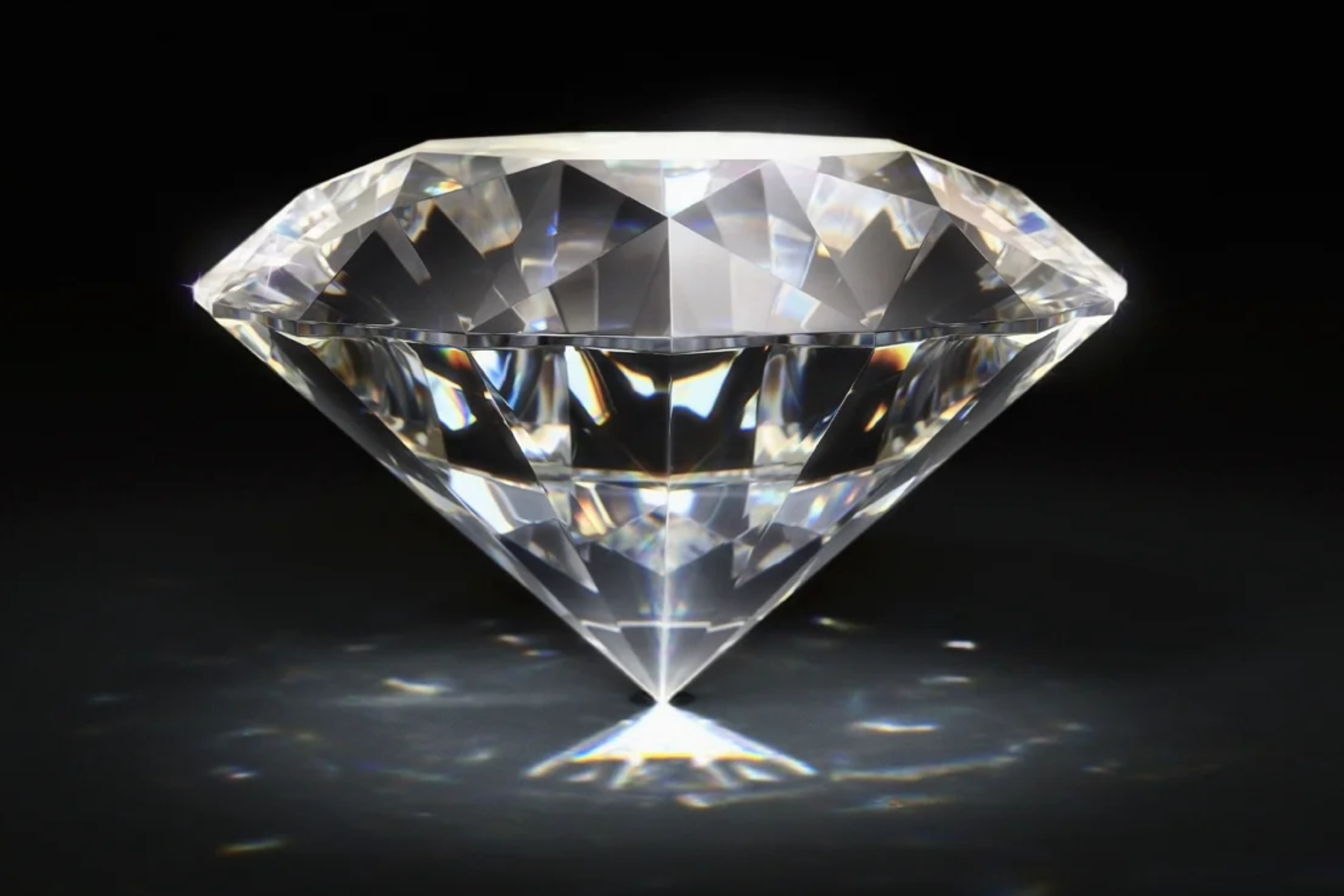 A standing cushion-cut diamond gemstone on a dark setting

The king of gemstones, diamonds are known for their hardness and durability. With a rating of 10 on the Mohs hardness scale, diamonds are the hardest gemstone and can take a lot of wear and tear.

This makes them a popular choice for engagement rings and other jewelry that will be worn often. This means that diamonds are virtually impossible to scratch or damage.

The unique crystal structure of a diamond, which is made up of a three-dimensional network of carbon atoms, is what makes it so hard. This structure makes the diamond incredibly strong and resistant to damage, making it ideal for use in a wide range of applications.

This means that they can withstand extreme temperatures without cracking or breaking. This makes them ideal for use in high-performance cutting tools, drill bits, and other industrial applications.

So, all these properties make diamonds the toughest gemstones. They are also the most valuable and sought-after gemstones due to their exceptional beauty, rarity, and durability.

Diamond is thought to be the intellect's gemstone, preventing misunderstandings (romantic and otherwise). Diamond is also thought to provide clarity of thought, which helps in the resolution of problems that come with a clear understanding. It is the perfect choice for special occasions such as engagement rings and anniversary gifts. 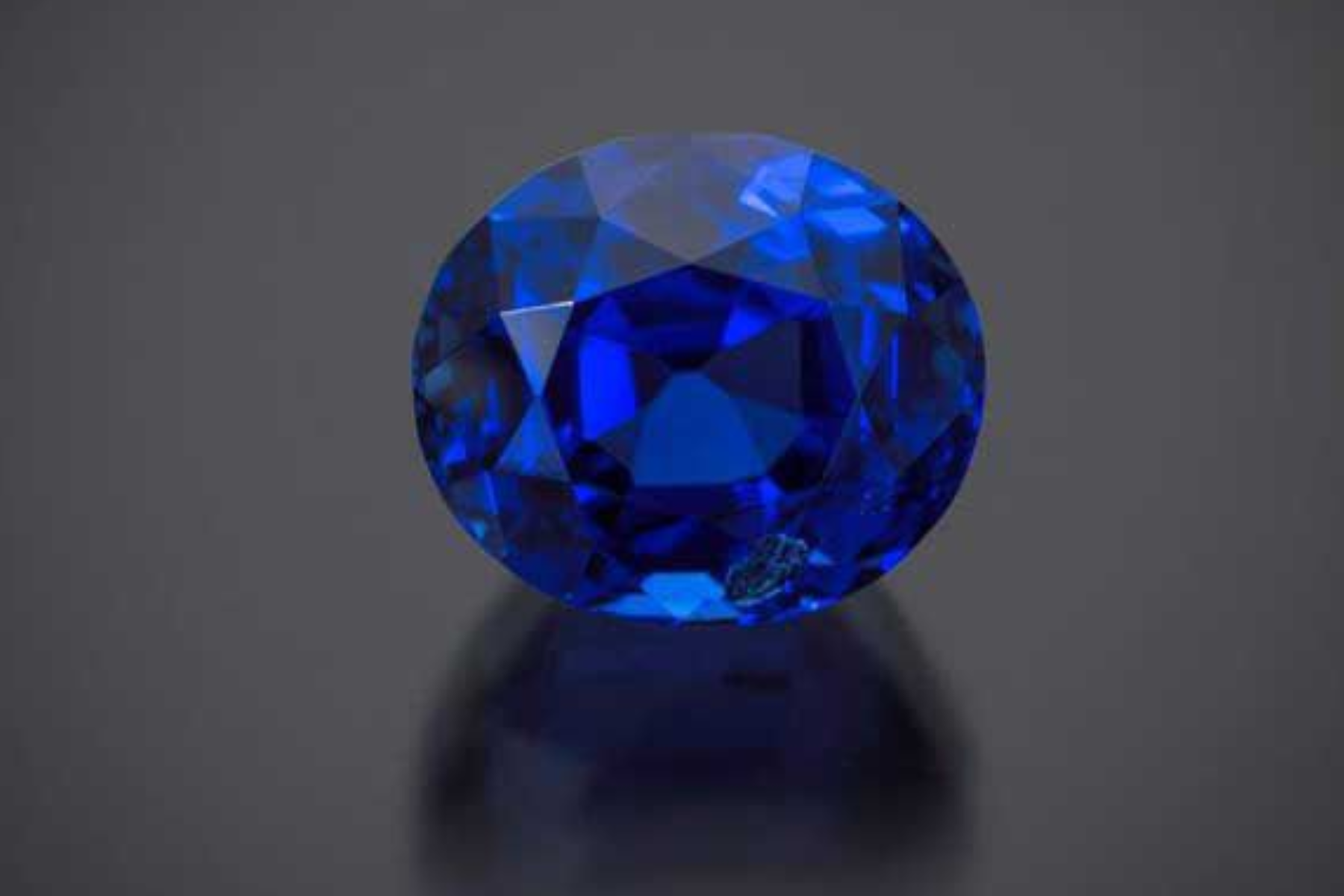 On the Mohs scale of hardness, sapphires are ranked as the second toughest gemstone, and they are well-known for their toughness and resiliency.

Because of their incredibly high level of hardness and durability, sapphires are widely considered among the toughest gemstones that can be purchased. On the Mohs scale of hardness, they are given a value of 9, which places them in the second-highest possible rating spot after diamond.

This means that sapphires are highly resistant to scratches and damage, making them a great choice for jewelry that will be worn often.

The hardness of sapphires is due to their unique crystal structure, which is similar to that of diamonds. Sapphires are made of a mineral called corundum, which consists of aluminum oxide molecules. This structure gives sapphires their strength and durability, making them ideal for use in a wide range of applications.

In addition to their hardness, sapphires, like diamonds, are also known for their exceptional thermal conductivity, which makes them resistant to thermal stress.

That is, they can endure high temperatures without cracking or breaking. As a result, they are very well for use in high-performance cutting tools, drill bits, and other industrial applications. 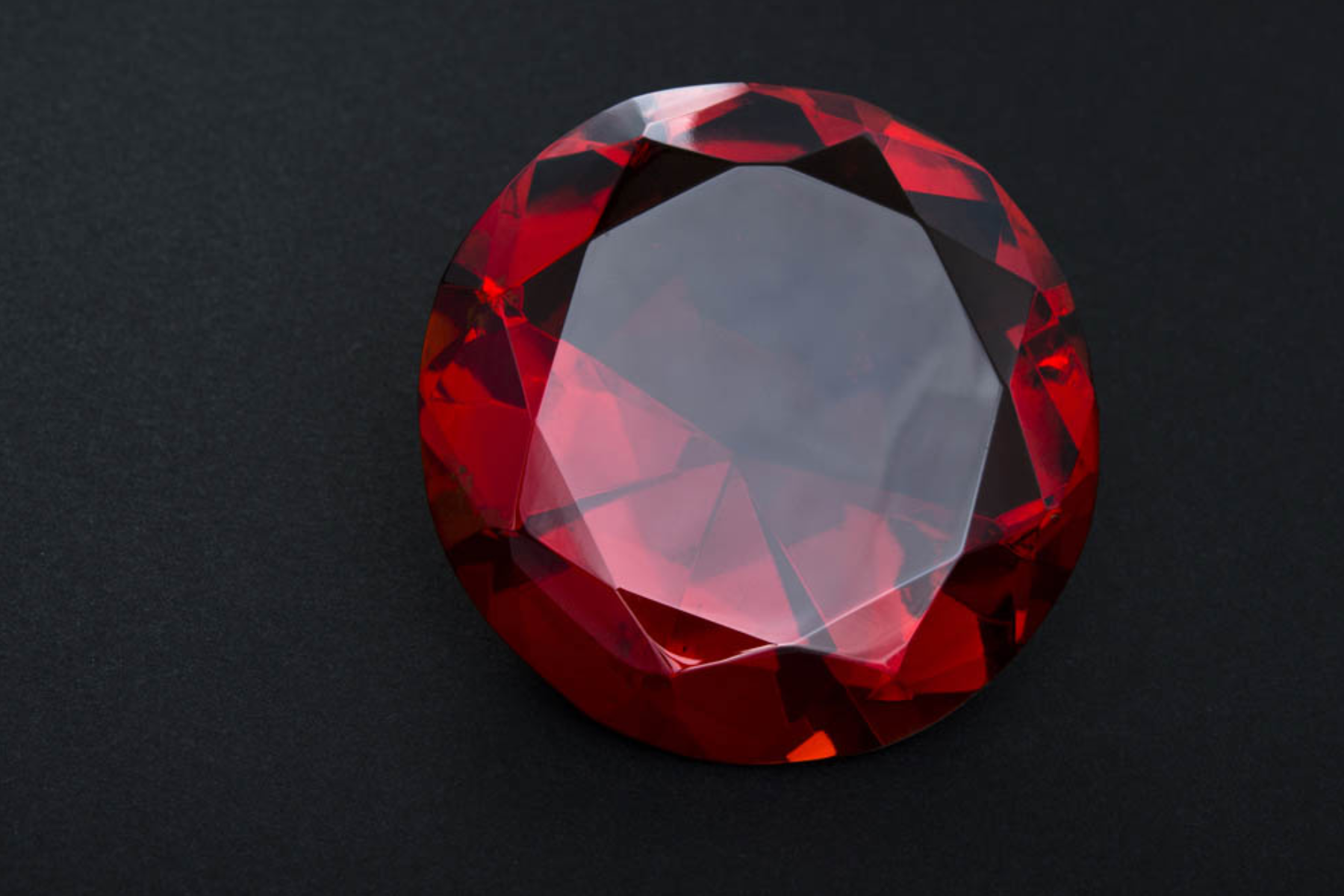 A Ruby gemstone on a black background

Ruby is the third gemstone after diamond and sapphire. It has a Mohs scale hardness of 9, which is the same as sapphire. This means that ruby is also highly resistant to scratches and damage, but... it's not as hard as a diamond.

Despite not being the hardest gemstone, rubies still have amazing strength and durability. This is due to their unique crystal structure, which is "somehow" similar to that of diamonds and sapphires.

According to the American Gem Society, rubies are formed deep within the earth under extreme heat and pressure. When oxygen and aluminum atoms are pressed, they form corundum. This mineral, along with the presence of chromium, produces rubies and their unique color.

This structure gives rubies their strength and durability, making them ideal for use in a wide range of applications as well as diamond and sapphire gemstones.

Rubies are known for their vibrant red color, which is caused by the presence of a small amount of chromium. The color red makes them highly valuable and sought-after for use in jewelry and other decorative items.

They are considered precious gemstones and are highly valued for their exceptional beauty, rarity, and durability.

Did you know? Rubies are more expensive than diamonds due to their rarity.

However, there is one gemstone that will catch your interest: the Moissanite stone. Is there a stone that is tougher than a diamond? Let's find out.

Moissanite Vs Diamond - Can It Dethrone Diamond?

Moissanite is a man-made gemstone that is created in a lab using a process called chemical vapor deposition. It is made from "silicon carbide", which is a different mineral than diamond's carbon.

Moissanite has a Mohs scale hardness rating of 9.25, which is slightly higher than ruby and sapphire and slightly lower than diamond's 10. This means that moissanite is durable and resistant to scratches and damage, but not as hard or good as diamond.

What is Moissanite and How Does it Compare to Diamond?

In terms of appearance, moissanite and diamond are very similar and difficult to differentiate from the naked eye. Both have a level of brilliance on the outside. However, moissanite has a slightly yellow or grayish tint, which makes it less desirable than diamond.

The most significant advantage of moissanite over diamonds is the price, as moissanite is significantly less expensive than diamonds, making it a more affordable alternative.

What Can Break A Diamond?

There may not be many naturally-occurring materials that are stronger than diamonds, but some metals made by humans, like tungsten and steel, are stronger. That means a diamond can be broken by a direct hit from a regular hammer.

The Gemological Institute of America says that fire can damage diamonds even if they don't have pure oxygen (GIA). Most of the time, a diamond that gets caught in a house fire or gets too close to a jeweler's torch won't go up in smoke. Instead, the surface will burn enough to look cloudy and white.

Will Diamond Melt In Lava?

At about 100,000 atm, the diamond's melting point is 4200 K, which is much higher than lava's temperature. So, you can't melt a diamond with lava. The catch is that at atmospheric pressure, it is almost impossible to melt diamond because its burning point is 900 °C (1173 K).

Diamonds, sapphires, and rubies are among the hardest gemstones, placing them at the top of the list for durability. Because of their well-known hardiness and resilience, the gemstones in question are an excellent choice for use in jewelry that will be worn frequently.

If you are looking for a rare piece of jewelry that will last a lifetime, such as an engagement ring or something else unique, these jewels are guaranteed to impress.