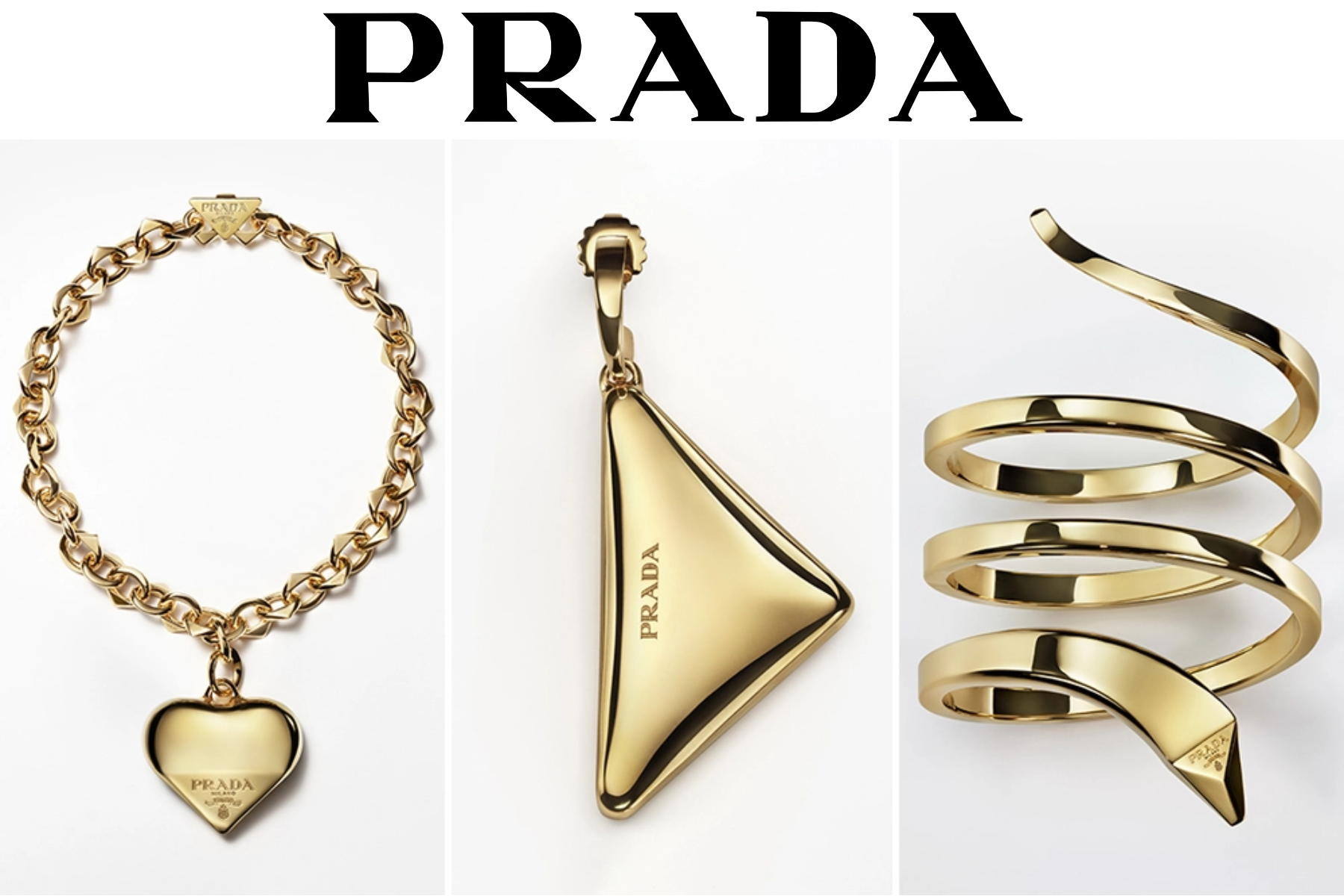 Lorenzo Bertelli, group head of corporate social responsibility, said that Prada launches its first fine jewelry line on Wednesday. It will be the first line of fine jewelry by a global luxury brand to be made with 100% certified recycled gold.

This was not a simple objective, and we are very happy we’ve succeeded because it allows us to set a new standard in the industry. Right from the start we wanted to do jewelry in a different and more radical way with a strong message and offering full traceability, shifting outdated industry standards to mirror societal change.

Supermodels Who Appeared In The Campaign

To celebrate the launch, Prada is putting out a campaign with award-winning American poet and activist Amanda Gorman, American actor, model, and singer-songwriter Maya Hawke, and Dutch-Korean-Canadian musician Somi Jeon. The campaign was shot by David Sims.

Classic portraits are put next to gold-gilded reflections to make what Bertelli called a "visually strong and immediate campaign, recognizably different from others in the category." 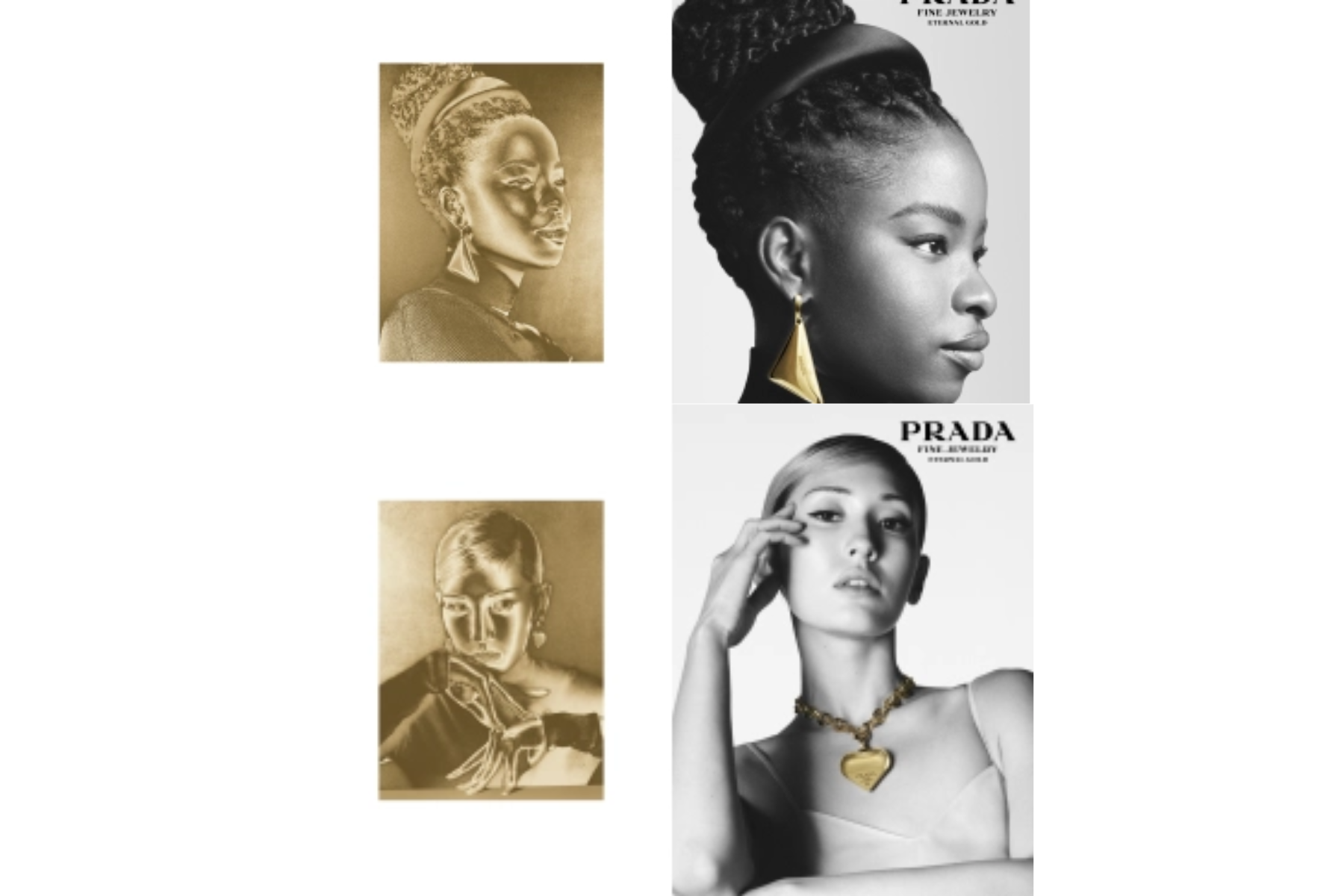 Amanda Gorman and Somi Jeon next to their gold-gilded reflections

Prada has also put together a team in its jewelry industrial division to work on the Eternal Gold line. Timothy Iwata, who is the director of Prada jewelry, is in charge of the team. Iwata was the global innovation officer at Cartier before he joined Prada.

It's clear that Miuccia Prada's longtime love of jewelry played a big role in the launch. Lorenzo Bertelli said with a knowing smile:

Timothy was surprised to see how involved and knowledgeable in the history of jewelry my mother is. She has fun freeing her creativity on the jewels.

The collection is built around 18-karat gold and Prada's signature triangle pattern, which is a nod to the brand's founder Mario Prada.

The triangle is used as a clasp on earrings, pendants, and ribbon chokers. Its angles are used to make chain links, hearts, and the head of a snaked bracelet. Pendants, for example, are now bigger than they used to be.

When asked why the triangle is becoming more important at Prada, Bertelli said that his mother and co-creative director Raf Simons started working on the logo for the fashion collections a few seasons ago, but that "now they are working on the abstraction of the logo and more on the shape, there’s been an evolution."

Prices range from four digits to sixty thousand dollars. The first collection has 48 pieces, and 10 of them can be made to order. Bertelli says that this service will be expanded in the future.

Bertelli said that all of the gold used in Prada's fine jewelry collection is Certified Recycled Gold that meets "Chain of Custody" standards set by the Responsible Jewelry Council.

Bertelli said that Prada's chain of responsible gold and diamond production can be tracked and checked at every step, which is something that no other fine jewelry or luxury fashion house in the world does.

Also new for fine jewelry, this verification has been recorded on the Aura Consortium Blockchain platform, which customers of the collection can use to check the pieces' authenticity and find out where they came from.

Their goal was to promote the use of a single blockchain solution that all luxury brands around the world could use. This would help consumers find out where luxury goods came from and if they were real. The OTB Group and Mercedes-Benz also joined as founding members.

Bertelli said that reducing the mining of new gold is good for the environment and human rights. Until now, diamond origins could only be traced for stones of 0.5 carats or more, but Prada is the first company to apply the idea to stones of all sizes.

The collection is the latest step in Prada's commitment to sustainability and doing the right thing, like switching to Re-Nylon, which is made from recycled nylon.

The prototypes are made in-house, but all of the jewelry is made in Italy, and almost all of it is made in Valenza, which is a hub for goldsmiths. Stones are set by hand, cut by hand, and polished by hand. Laser engraving and 3D print prototyping are also used.

Prada started working on this project about two years ago, and it will be shown to the public for the first time at the group's Capital Markets Day in November 2021. At that time, Bertelli said he has learned "very different dynamics" compared to the fashion industry.

He knows, for example, that there are groups of "customers that are not really interested in fashion but who buy only jewelry." This was reflected in a plan for the launch so that they wouldn't make the mistake of going after the same customer, he said.

The next step for the brand is to make a line of high-end jewelry.

The collection will only be sold in Prada stores starting on Wednesday. This includes cities like Milan, Rome, Paris, London, Dubai, Beverly Hills, New York, Tokyo, Seoul, Shanghai, and Beijing in Europe, the United Arab Emirates, Kuwait, the U.S., China, Japan, and Korea.

It will also be available online in some countries in Europe, the United Arab Emirates, the United States, China, Japan, and Korea starting on October 17.