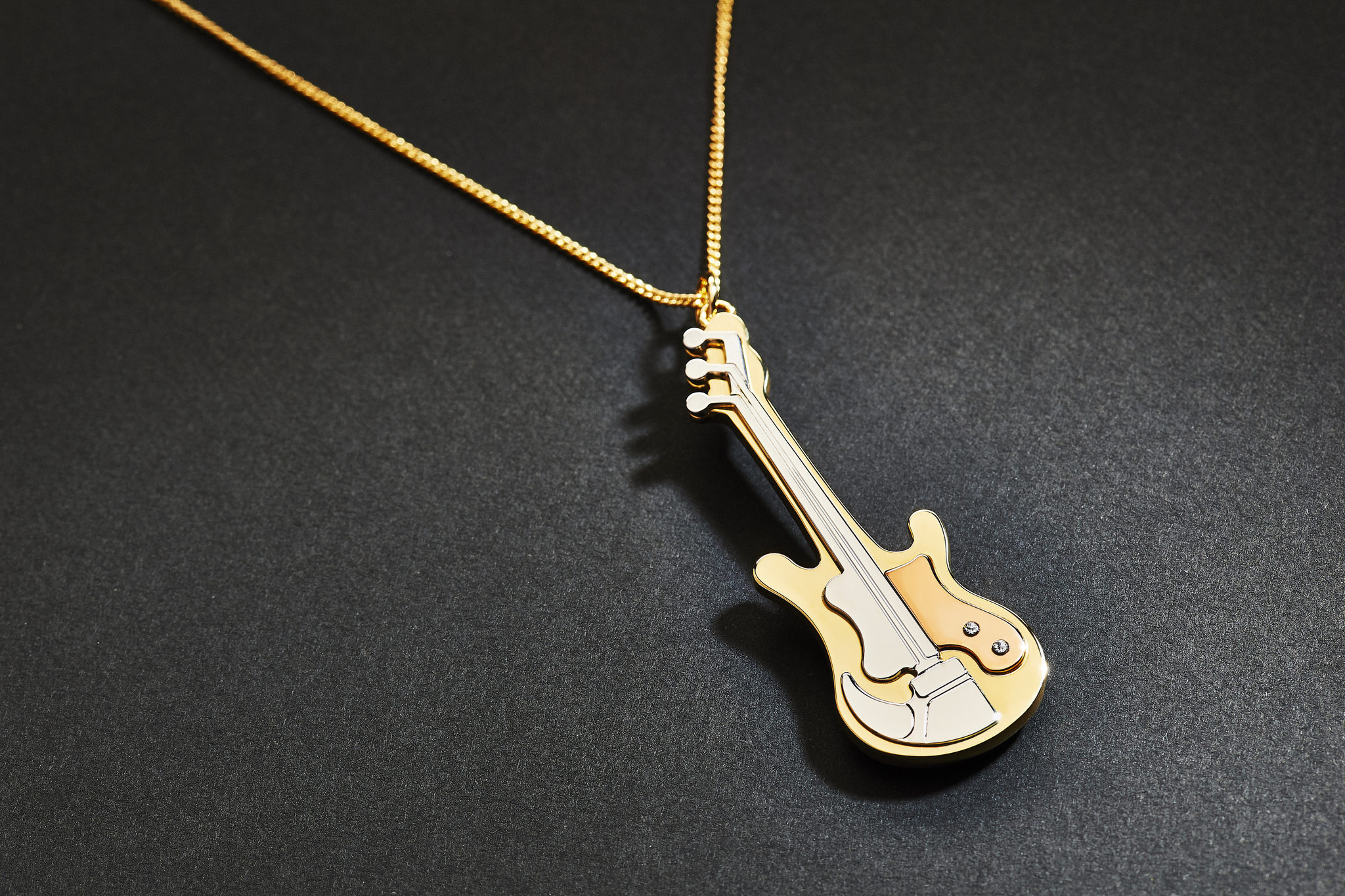 According to Lorenzo Bertelli, the group head of corporate social responsibility, Prada introduces its first fine jewelry collection. This product is a first for the luxury goods industry as a whole, as it is the first one to be made entirely out of certified recycled gold.

Bertelli said that this was not a simple objective, and as a result, they are very happy that they have succeeded in achieving it, because it allows them to set a new standard in the industry.

From the very beginning, one of our primary goals was to reinvent the jewelry industry in a way that is both unconventional and revolutionary, with a focus on conveying a meaningful message while also providing complete chain of custody for all of our products.

Prada will be releasing a campaign that was photographed by David Sims and will feature award-winning American poet and activist Amanda Gorman, American actor, model, and singer-songwriter Maya Hawke, and Dutch-Korean-Canadian musician Somi Jeon. This will mark the launch of Prada's new collection. 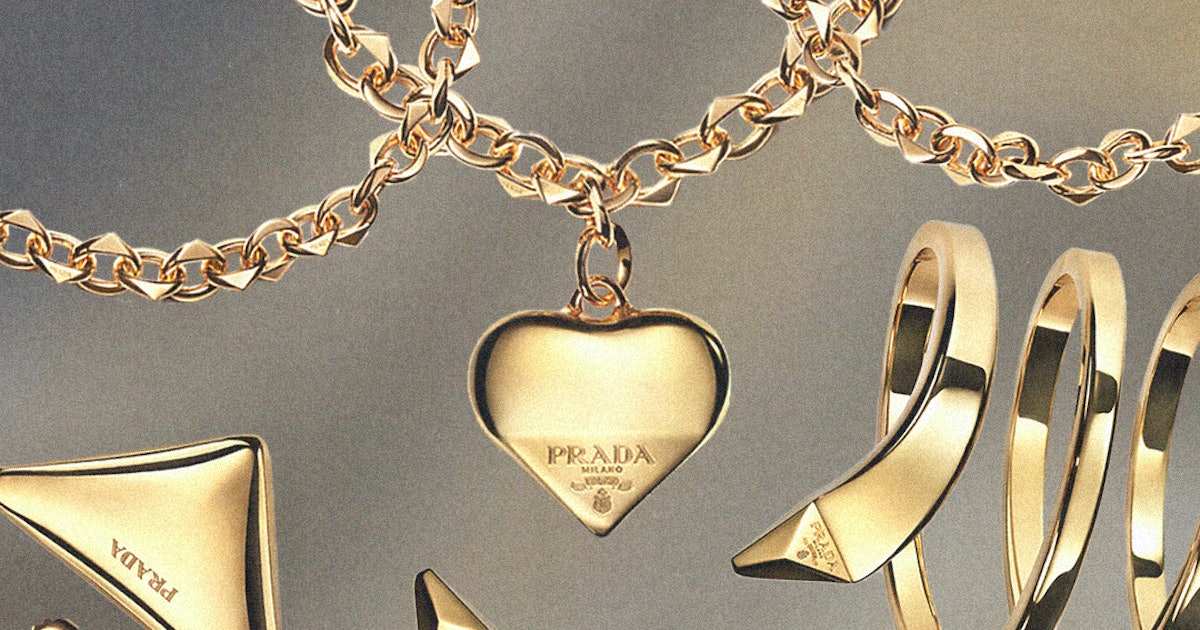 Classic portraits are juxtaposed with gold-gilded reflections for a "visually strong and immediate campaign that stands out from others in the category," according to Bertelli.

Prada has also assembled a team on the jewelry industrial division that is working on the Eternal Gold line, which is led by Timothy Iwata, Prada jewelry director. Iwata previously worked at Cartier as the global innovation officer.

Clearly, Miuccia Prada's lifelong love of jewelry has played a role in the launch. Timothy was surprised to see how involved and knowledgeable my mother is in the history of jewelry, Bertelli said.

She has fun letting her creativity loose on the jewels, he said, knowingly smiling. Prada's signature triangle motif, which harkens back to the brand's founder Mario Prada, is at the heart of the collection, as is a focus on 18-karat gold.

The triangle is used as a clasp closure on earrings and pendants, as well as on ribbon chokers, and its angles are used to shape chain links, hearts, and the head of a snaked bracelet. Proportions are reconsidered, with pendants, for example, being supersized.

Asked about the increasing relevance of the triangle at Prada, Bertelli said his mother started with co-creative director Raf Simons working on the logo on the fashion collections a few seasons ago, but observed that “now they are working on the abstraction of the logo and more on the shape, there’s been an evolution.”

Prices can range anywhere from four figures to sixty thousand dollars. Bertelli has stated that the made-to-order component of the business will be expanded in the near future. The debut collection consists of 48 pieces, of which 10 of the designs can be ordered custom-made.

According to Bertelli, all of the gold that is used in Prada's collection of fine jewelry is Certified Recycled Gold and satisfies the "Chain of Custody" standards that are established by the Responsible Jewelry Council.

Bertelli also said that no other fine jewelry or luxury fashion house in the world offers something comparable to Prada's verifiable and traceable responsible gold and diamond production chain. This is something that Prada is the only company in the world to offer.

According to the executive, "Prada's recycled gold is drawn only from eligible recycled material sources in compliance with due diligence." These sources include industrial gold, gold sourced from electronic components, and postconsumer precious objects.

Prada only works with those precious metal and stone suppliers who meet the highest industry standards in terms of human rights, worker safety, minimal environmental impact, and ethical business practices, the company says on its website.

Records of this verification, which is also new for fine jewelry, have been logged on the Aura Consortium Blockchain platform and can be accessed by the collection's customers, who will be able to verify the authenticity and trace the provenance of their pieces.

In April 2021, Prada, LVMH Mot Hennessy Louis Vuitton, and Compagnie Financière Richemont formed the Aura Blockchain Consortium with the goal of promoting the use of a single blockchain solution open to all luxury brands worldwide to assist consumers in tracing the provenance and authenticity of luxury goods.

The OTB Group and Mercedes-Benz joined them as founding members. Bertelli observed that reducing new gold mining benefits the environment and human rights, and while traceability of diamond origins is traditionally only possible with stones of 0.5 carat or larger, Prada expands the concept to stones of all sizes for the first time.

The collection is the latest step in Prada's commitment to sustainability and responsible practices, such as its use of recycled Re-Nylon. Although the prototypes are created in-house, the jewelry is entirely made in Italy, almost entirely in the Valenza goldsmith hub. Laser engraving and 3D print prototyping are combined with hand stone setting, cutting, and polishing.

Prada began working on this project about two years ago, with the goal of unveiling it at the group's Capital Markets Day in November 2021, and Bertelli stated that during that time he has learned "very different dynamics" than in the fashion industry.

He is now aware of clusters of "customers who are not really interested in fashion but who buy only jewelry," for example. This was reflected in a launch strategy designed to avoid the mistake of targeting the same customer, he observed. The brand's next step will be a high jewelry collection.

The collection will be available exclusively in Prada stores beginning Wednesday in Europe, the United Arab Emirates, Kuwait, the United States, China, Japan, and Korea, with locations ranging from Milan, Rome, and Paris to London, Dubai, Beverly Hills, New York, Tokyo, Seoul, Shanghai, and Beijing, among others.

It will also be available online beginning October 17 in Europe, the United Arab Emirates, the United States, China, Japan, and Korea.