Every person who has a metal detector hopes to find something valuable. Metal detectorist discovers medieval wedding ring worth an estimated $47,000. The medieval diamond wedding ring is in "almost perfect condition" near Thorncombe in the South West of England.

A Life-changing Discovery Made By A Metal Detectorist

A press release from auction house Noonans said earlier this week that David Board, 69, found the "stunning" ring on his second try at being a metal detectorist. In the 1970s, he searched local beaches but didn't find anything important.

Board said that finding the ring was "once in a lifetime." He said the following in an interview with CNN:

There will probably never be another one like it. Back then, each ring was individual and unique, not mass-produced like today. It's stunning.

In 2019, Board started metal detecting again. On the second day of a search in the field, he was about to give up when his metal detector went off near a path.

At first, Board thought the culprit was a candy wrapper, but he soon realized it was a gold ring.

Board said that when he found it covered in mud, he thought it was just "scrap metal" and put it in his pocket.

"It was once I got home and washed it off that we realized it was a lot better than we thought," he said.

Nigel Mills, a consultant at Noonans who works with coins and old things, said in the release that the ring is in "almost perfect condition." The jewelry has an inverted diamond set into a gold hoop made of two bands that are joined together. This is meant to represent marriage.

The auction house says that a medieval French inscription inside the band says, "Ieo vos tien foi tenes le moy." This means, "I hold your faith, hold mine." 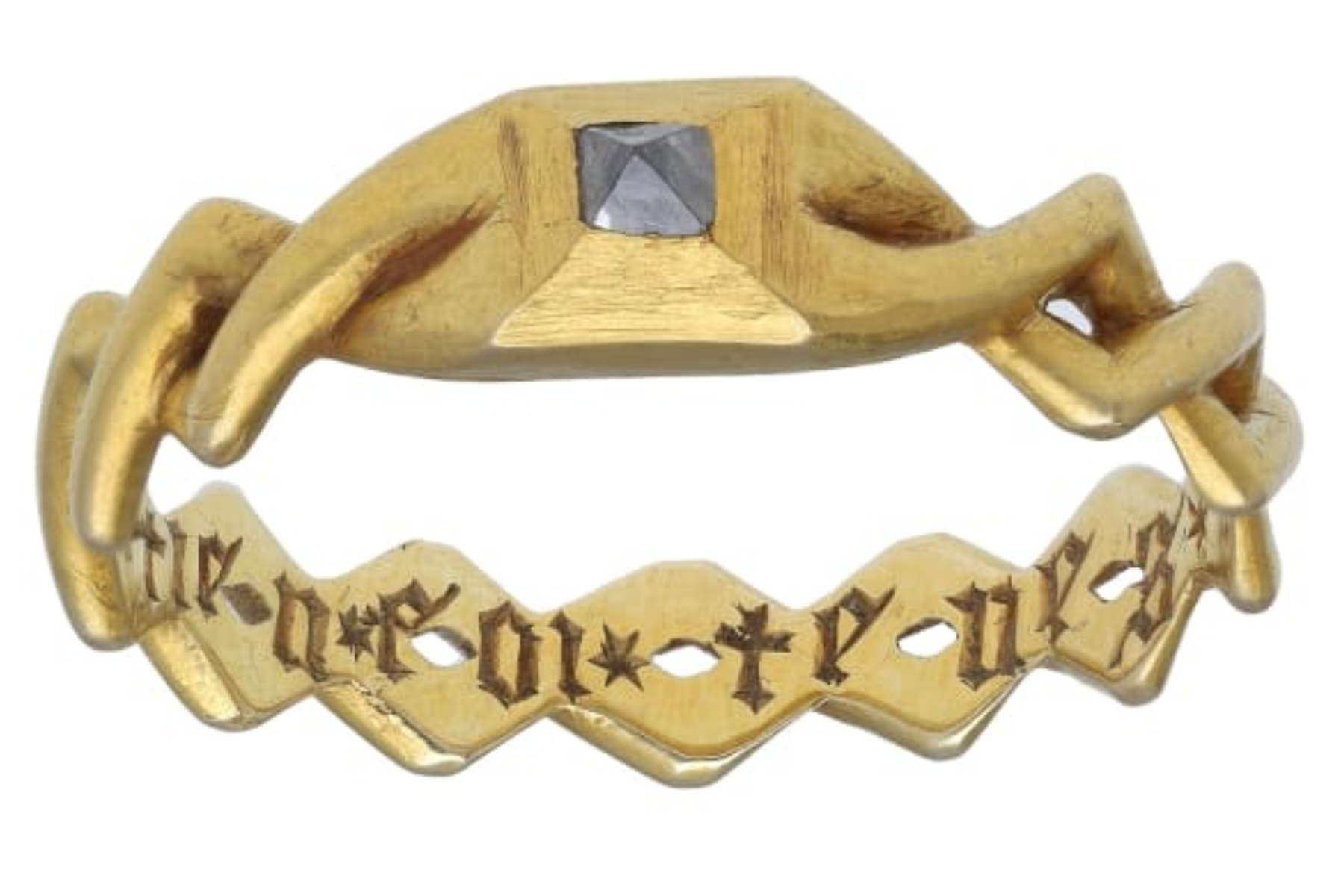 The ring interior inscription reads "I hold your faith, hold mine," in French

Based on where the ring was found and how well it was made, Noonan's experts think it was given to Joan Brook by her husband, Thomas Brook, on their wedding day.

The release said that their marriage in 1388 brought a lot of money to the Brook family because Joan was the widow of Robert Cheddar, a wealthy cloth merchant who had been mayor of Bristol, England, twice.

Noonans' said that it was at a time when medieval ideas of chivalry and courtly love were at their best. The ring reflects these ideas.

The item will be sold at auction on November 29. It is now called "The Lady Brook Medieval Diamond Ring."

Board goes out three times a week, if the weather is good, to look for another great artifact among the musket balls and coins from King George I. He said:

It will be amazing if I did. You never know what the next signal is going to bring.

The find adds to a long list of amazing things that treasure hunters in the UK have found.

In 2020, a hobbyist found a bunch of Bronze Age objects in a field in Scotland. This was called a "nationally significant" find at the time.

And last year, CNN said that a first-time metal detectorist in Denmark had found a huge stash of gold items from the Iron Age.