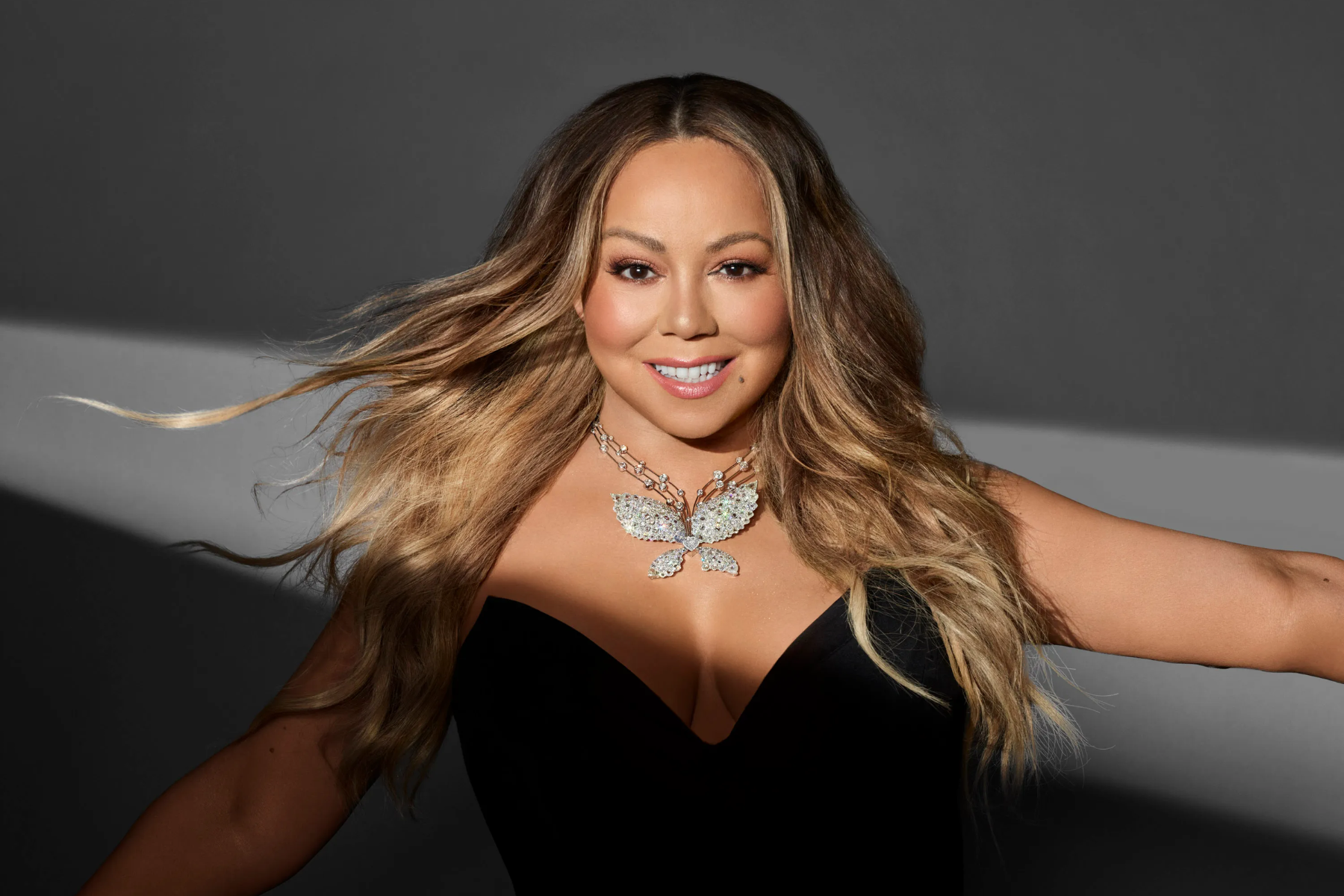 Mariah Carey discusses her new Chopard collaboration as well as Butterfly's 25th anniversary. MC tweeted on Friday morning (Sept. 16) about her sixth studio album's 25th anniversary, which was released on this day in 1997:

I poured myself into every lyric and every note on every song. 25 years later, it's still one of the proudest moments of my life & career.

When it comes to Mariah Carey's style, two words come to mind: Extreme glamour. The singer has developed her own unique style, defined by figure-hugging sequin gowns and jaw-dropping diamonds.

She once joked that she's allergic to fluorescent lighting, demonstrating her dedication to her fabulous, diva-worthy look. It was only a matter of time before Carey started designing her own jewelry.

She announced this week that she will be collaborating with the fine jewelry label Chopard on a special two-collection line. In honor of the occasion, Vogue spoke with Carey about her new venture.

Carey's favorite symbol is the butterfly. She's long worn butterfly jewelry, and this year marks the 25th anniversary of her album Butterfly. 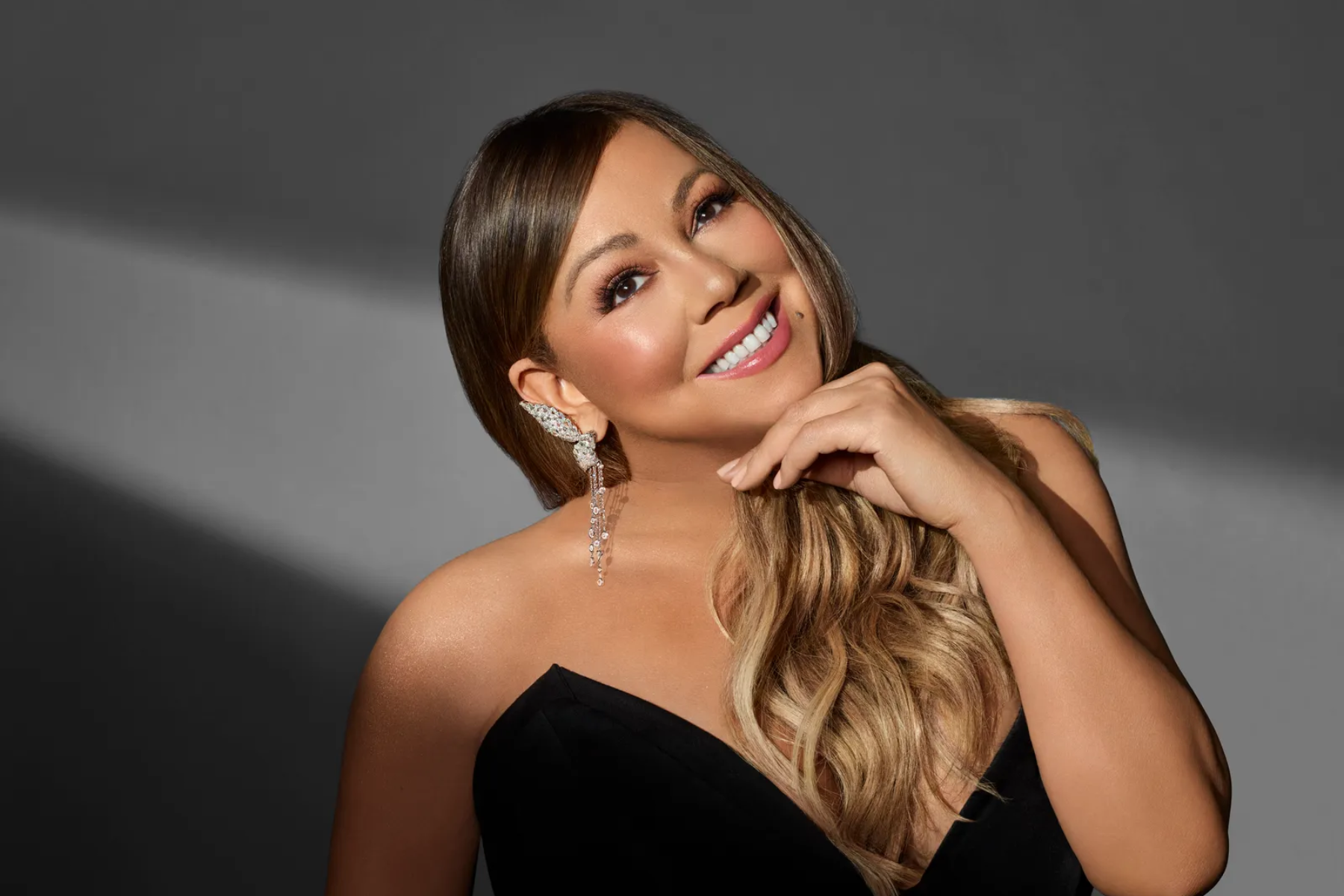 Carey tells Vogue that it just happened to be at the same time, and that wasn't coordinated in any way. The album was a watershed moment in Carey's career, and she credits it with helping her find her own voice and style as an artist.

Given that this was Carey's first time designing high jewelry (she previously had her own affordable jewelry line with HSN), she admits there was a learning curve. Carey speaks with Vogue about what inspired her new jewelry designs, what she keeps in her jewelry box, and what her career-defining album Butterfly means to her today, 25 years later. 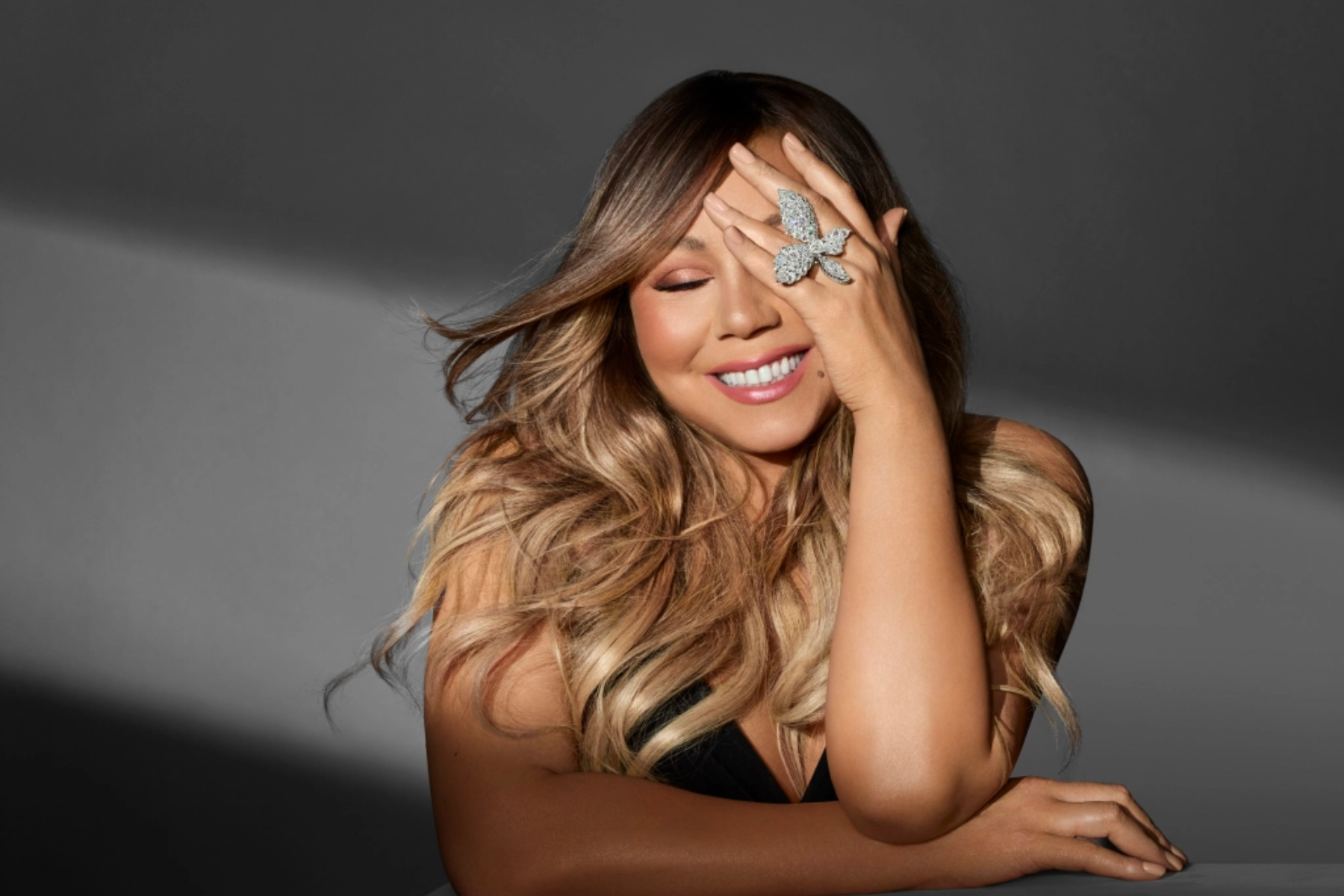 It was an honor working with Chopard, and I learned so much during the creation of the pieces. It was a truly creative process. It was a very non-corporate thing. They're such a major company, but we weren't asking anyone's permission for what they thought was the best idea. It's very off the cuff.

Vogue: Thanks for chatting on this gloomy, rainy day! Are you in New York?

Mariah Carey: Yes, I am. Typically I’d still be sleeping, so I just found out it’s raining. I actually love New York in the rain. I know that sounds like a lyric from a standard or something. But I do. It’s not Paris in the rain, different vibes, but I still love it.

Vogue: So to start, tell me about how this collaboration with Chopard came about.

Mariah Carey: I met Caroline [Scheufele, the president of Chopard] a couple of years back, and she was just the most fun, festive person ever.

Then, as one does, I was celebrating Christmas well after it was over, it was well into January, and I noticed there was a gift under the tree that I hadn’t opened yet. It was from Chopard: It was a beautiful silk scarf with a butterfly pattern on it and a handwritten note from Caroline.

At that moment, I was super excited because one of my songs was about to go to diamond, and I really wanted to do a collaboration with a diamond company.

When this happened, I just said, ‘Let me try it and see if there’s any interest.’ This was two years ago, so I thought they would want to do some sort of Christmas thing; I was suggesting [designs of] snowflakes.

But she was like, ‘No, we want les papillons—we want to do butterflies all year long!’

Vogue: What are your favorite pieces from the collection you guys made together?

Mariah Carey: When we were first on the phone, Caroline started sketching this gorgeous butterfly necklace, and it’s still the most memorable moment for me in this collaboration. The symbol of the butterfly became synonymous with me and my fans, because of my album Butterfly.

With the earrings, I also love that one side is one wing and the other is another wing, then it’s dripping down with diamonds. With the Happy Butterfly collection, you can be completely [casual with it].

For me, it’s with jeans and a white shirt—like you see in the picture of me with my dog.

Mariah Carey: That’s my dog, Mutley. He made a cameo. That bracelet is gold, and I feel people will stack it. I was like, ‘I’m gonna need several—we’re going to be stacking this!’ 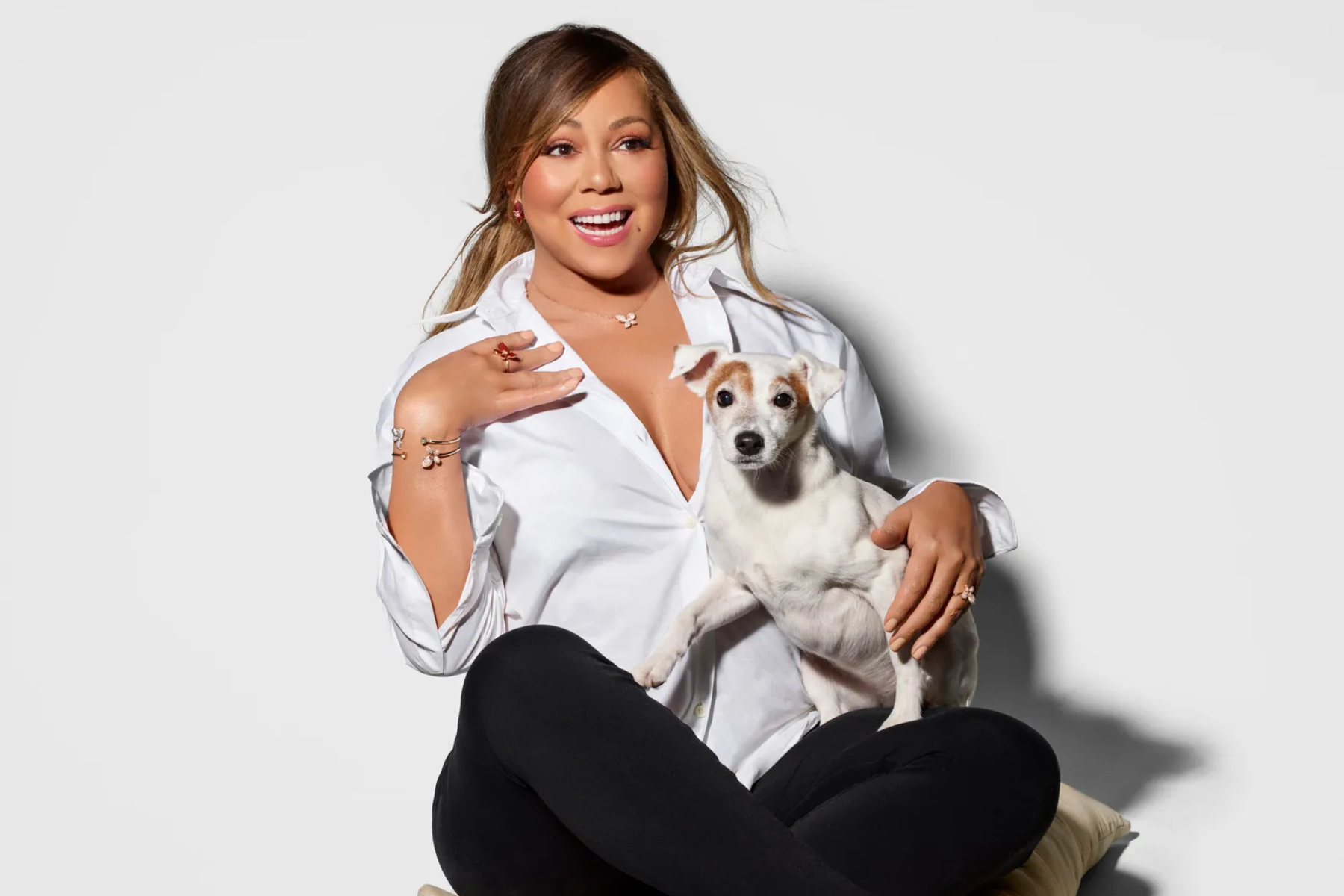 Mariah Carey sits on the ground holding Mutly, her dog

Vogue: The collaboration does come at a perfect time, given your album Butterfly celebrates its 25-year anniversary this year. What does that album mean to you now?

Mariah Carey: It really is the fan favorite out of all my albums. I mean, it’s debatable. People also like The Emancipation of Mimi. They were two different moments of freedom and emancipation.

Butterfly represented an era of my life that I had to exit. I entered the music business as a teenage 19-year-old girl, and then being in a situation that was very stifling and very difficult, I had to evolve and gain the strength to realize that I had to get out of that.

When I was creating the Butterfly album, I was using it as a metaphor to fly and to be free, and to make the type of music that I wanted to make.

There was a lot of criticism from people who clearly weren't listening to the same music I was listening to. They were like, ‘Why is she trying to be a hip-hop artist?’ The corporate morgue, as I call it, didn’t get it.

But to my diehard fans, that album represents more than just, ‘She was doing a hip-hop record with rappers.’ It’s a very important album in terms of the scheme of my life.

When I look back on it, my entire life really went into that album. If I didn't have that, I don't know if I would have been able to leave the situation I was in.

Vogue: “Honey” from Butterfly is definitely my favorite song of yours.

Mariah Carey: Yay! Thank you. We’re re-releasing [the video] in 4K, it looks so much better.

Vogue: I have to ask: Do you still have all of your Tom Ford-era Gucci from that video?

Mariah Carey: Oh my gosh! how much did we love that moment, though? The swimming in heels, I destroyed those shoes. Nobody even had them yet. Do I still have those? I have them somewhere, yes. I better have them, otherwise, clearly, nobody was doing their job.

Vogue: I get the sense that you’re a big jewelry collector in general. Are you?

Mariah Carey: What would make you think that? [Laughs] No, I am. But I stopped buying jewelry for myself a little while ago. I have pieces that are very sentimental to me, and there are vintage pieces that I love.

Some people need a new look every day, but if something is a signature piece that I always wear, then I just wear it—it's the sentimentality of it all for me. But I am a collector of jewelry, and I do need to get a new jewelry case if you know anybody.

Mine is filled up, and I need a new one. I actually had this beautiful, vintage black and white Prada jewelry box, and then it just became too small. And I graduated from this other one.

Vogue: Jewelry can be a very sentimental thing—family heirlooms, even. I’m wondering if you’ve started thinking about any pieces in your collection that you will pass down to your children.

Mariah Carey: Thinking of things? Since my daughter was two-years-old—she’s 11 now—she’s been deciding which pieces would be hers. She’d wear my high heel boots as a two-year-old, traipsing around in my lingerie closet.

The boots were higher than her legs. I have a video of this—I was like, ‘What are you doing? What are you wearing?’ And she goes, ‘My boots.’ And she’s definitely clearing her decks for the diamonds.