March Birthstones - Aquamarine As The Stone Of The Seas 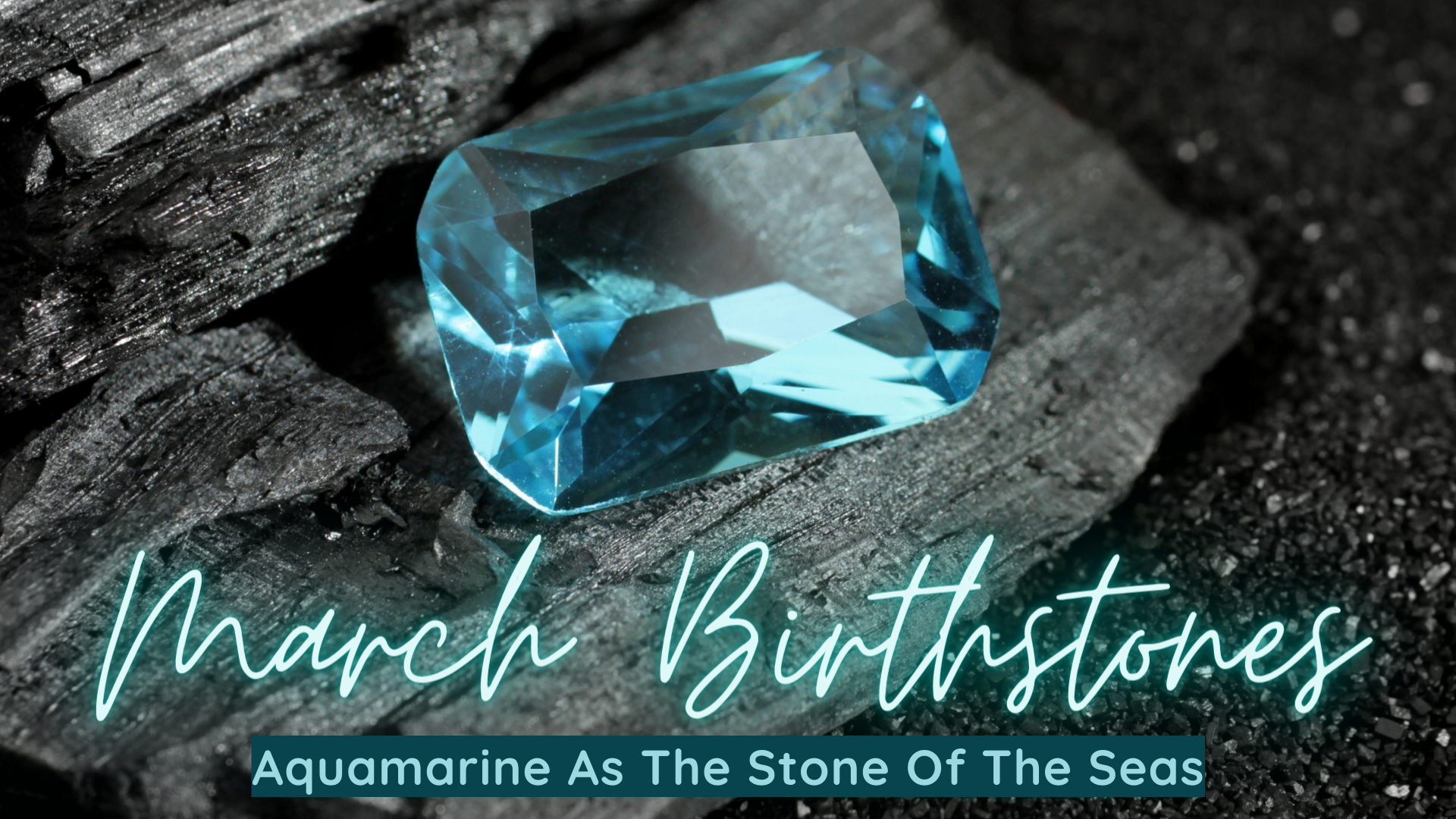 Birthstones are always a great conversation starter and a great way to find people who were born in the same month as you and are said to have the attributes of the stones.

The great thing about March Birthstones, as with many other months, is that there is a wide variety of beautiful gems to choose from. The third month of the year is characterized by dramatic seasonal changes in both hemispheres of the globe.

Aquamarine and Bloodstone are the birthstones for the month of March. However, the most popular March birthstone is aquamarine, also known as the stone of the seas.

We will discuss the Aquamarine stone as the first choice for March Birthstones, as well as its alternative stones, meaning, and symbolism, in this article. An earing with Aquamarine gem with a rock beside it

Aquamarine is the popular and modern March birthstone. It's blue beryl with luminescent crystals arranged in hexagonal pillars.

The aquamarine's turquoise color will remind you of a beautiful island paradise or ice formations in the Arctic Circle. This gem's visual perception of the ocean is caused by a small amount of iron. No other name fits it better than its given name. Aquamarine is a combination of two Latin words that mean "seawater."

According to legend, the gem was brought to shore when the mermaid's treasure troves overturned in the deepest part of the sea. Because the gems were blessed by Neptune himself, they can provide protection and good fortune to those who find them.

This birthstone represents the energies of serenity, loyalty, and courage. Those born in March will attract peace and tranquillity into their lives if they wear this gem.

It is also known to bring harmony to couples, which is why it is the gemstone of choice for 19th wedding anniversaries. The loyalty it attracts can help maintain stability between friends and couples, which will only grow stronger over time.

The "Stone of Courage" is aquamarine. Its serene energy can calm its wearer, giving him or her the courage to face life's various challenges.

The History Of Aquamarine

Aquamarines were said to have washed ashore from the sea after falling from jewel boxes belonging to the sirens, according to legend. They believed these lovely stones were sacred to Neptune, the God of the Sea.

Throughout history, sailors believed that this stone could protect them from harm while they were out on the open sea.

Wearing an aquamarine gemstone is thought to provide courage and sharpen the mind. Some people believe that wearing this magnificent-looking gemstone cures laziness and brings happiness.

Aquamarine gems were thought to provide eternal youth in ancient times. The Romans also believed that the stone could cure diseases of the liver, stomach, and throat.

For good reason, aquamarine is one of the most popular semi-precious stones. This gemstone is a member of the beryl family, which includes emeralds.

While aquamarine is the March birthstone, it is also the gemstone traditionally given to commemorate sixteenth and nineteenth-year anniversaries.

Consider the color of the stone first when purchasing aquamarine stones. The most important factor is the color. The more valuable the stone, the deeper its color.

Pay close attention to the intensity of the color as well. A valuable aquamarine stone will appear pure, almost clear blue.

Aquamarine stones are also beautiful in smaller sizes, and they can be used to adorn and accent a much larger center stone on a ring.

Most aquamarine stones are clean and free of visible inclusions or flaws. Examine the stone and ensure it is eye-clean before purchasing it to ensure you are purchasing a stone with good transparency and clarity. 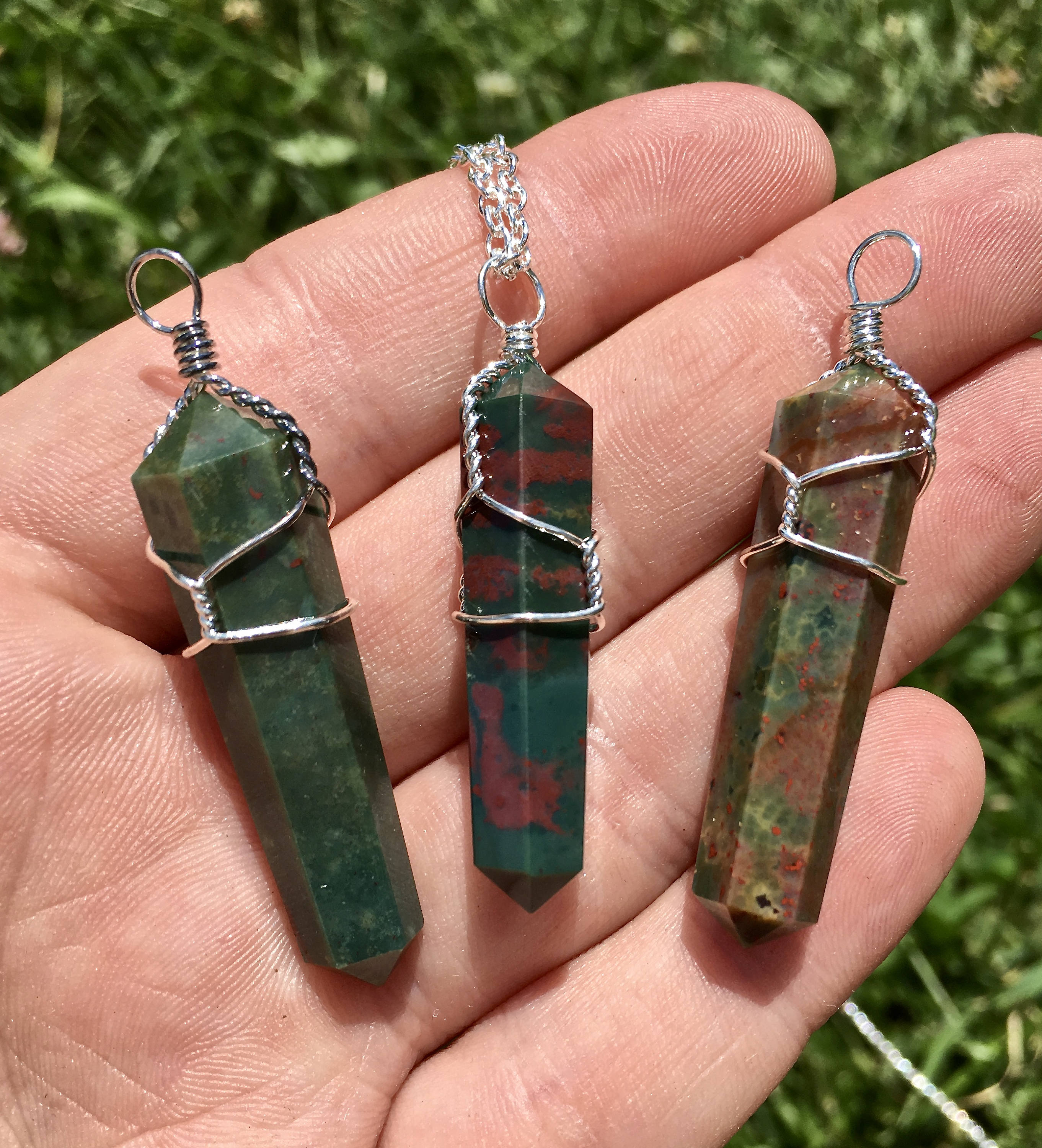 As previously stated, if you are one of the many people born in March, you can choose the Blood Stone as an alternative stone.

Aquamarine's serene beauty certainly makes it a desirable gemstone choice, but many March birthdays may prefer darker and more mysterious for their jewelry of choice.

Because of the ancient belief that bloodstone has magical properties on the sun itself, affecting the motion of the sun if placed in water, bloodstone is regarded as a "heliotrope," an ancient Greek term for "to turn the sun." This belief was most likely influenced by the gem's reflective properties when exposed to sunlight.

The History Of Blood Stone

According to one bloodstone legend, the first heliotrope was formed when Christ's blood touched it. The jasper at the cross's foot was then transformed into a bloodstone. As a result, bloodstone is said to have spiritual powers.

Because of this symbolism, medieval Christians would carve crucifixion scenes into bloodstones. It is also known as the Martyrs' Stone.

Because Lent is frequently observed in March, the religious symbolism of bloodstone jewelry can make it a meaningful gift for a March birthday or for Easter.

It is said that these gemstones promote purity, strength, and protection. Their red streaks are thought to heal blood-related disorders. Wearing a bloodstone while sleeping is said to bring clear and vivid dreams as well as protection.

Here are some more facts to add to the fascinating histories of the March birthstones:

Where Is Aquamarine Found?

Aquamarine is most commonly found in Brazil, but it is also found in Madagascar, Pakistan, and Nigeria, as well as the United States.

Aquamarine grows in large, six-sided crystals that can grow to be a foot long, making it an ideal stone for cutting into large gems. One 19-inch-long and 16-inch-wide blue-green crystal discovered in Brazil weighed more than 240 pounds.

What Is The Value Of Aquamarine Stone?

Aquamarine, though not a precious gemstone, can be quite valuable. Deeply colored large aquamarines weighing more than three carats could fetch more than $1,500. Two to three-carat stones are usually worth more than $1,000. Smaller, lighter-colored aquamarines can be worth $500 to $675, depending on their size.

What Is The March Birthstone Color?

Aquamarines are as clear and blue as a spring sky or as blue-green as ocean waters. Bloodstones are dark green with red streaks.

March birthstones, Aquamarine, is an elegant gemstone with blue hues that rival those found in nature. Bloodstone, its sister stone, is a unique alternative for those born in March. March is a special month because the stones associated with it are so dissimilar in almost every way.