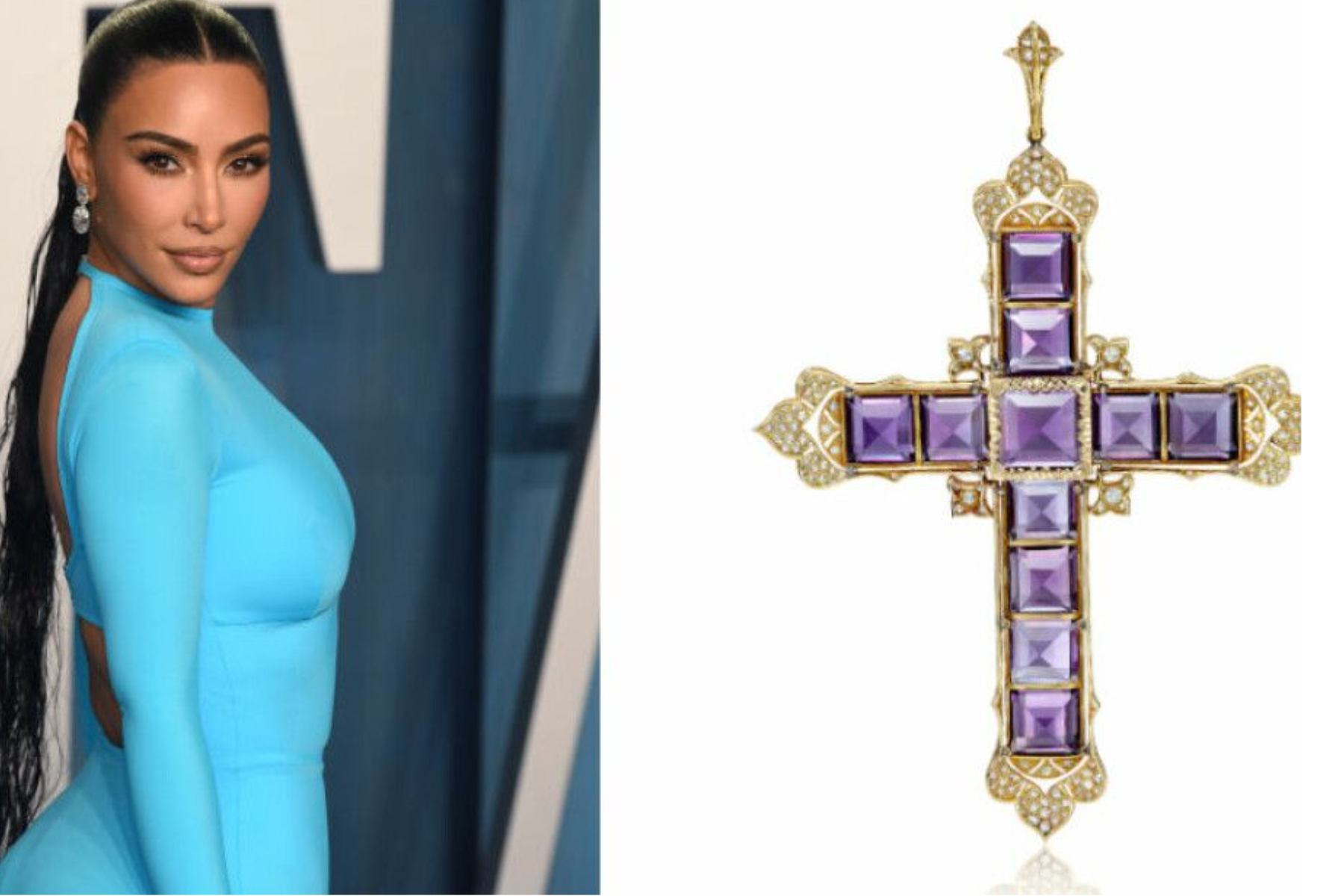 At the annual Royal & Noble auction held by Sotheby's on Wednesday, the 42-year-old SKIMS mogul made a successful bid on the diamond-encrusted amethyst Attallah cross pendant that was most famously worn by Princess Diana.

The star of "Keeping Up with the Kardashians" placed a bid for the item, which consists of square-cut amethysts highlighted by circular-cut diamonds weighing a total of 5.25 carats, and ultimately won it for $197,453 within the final five minutes of the auction. According to Sotheby's, "double its pre-auction estimate" was achieved here.

This is a bold piece of jewelry by its size, color and style which cannot fail to make a vibrant statement, whether it be of faith or fashion — or indeed both. We are delighted that this piece has found a new lease of life within the hands of another globally famous name.

PEOPLE has been informed by reliable sources that Kim is proud to own a piece of fine jewelry that was formerly owned by the late princess.

The stunning cross pendant will be added to her growing collection of jewelry, which includes pieces that were either worn by or belonged to powerful and iconic women who have served as Kim's inspiration.

The late Princess of Wales wore the pendant on a number of occasions, the most notable of which was Birthright's charity gala in London in 1987, which supported the organization's humanitarian work for those who are pregnant or giving birth.

She accessorized her Catherine Walker royal purple Victorian velvet gown with a bejeweled floral-detailed pendant that she wore on a long pearl chain and paired with the gown.

According to a press release that was distributed by Sotheby's, the ornament has a rich history that dates back many decades, beginning with the court jeweler Garrard, who designed the one-of-a-kind pendant in the 1920s.

Later on, in the 1980s, the one-of-a-kind gem was purchased by the late Naim Attallah CBE, who had been the former group chief executive of Asprey & Garrard. Princess Diana frequently borrowed the gem from Naim Attallah.

According to the press release issued by Sotheby's, the cross was never worn by anyone other than the Princess, and since her passing, no one has had the opportunity to view it in public until now. 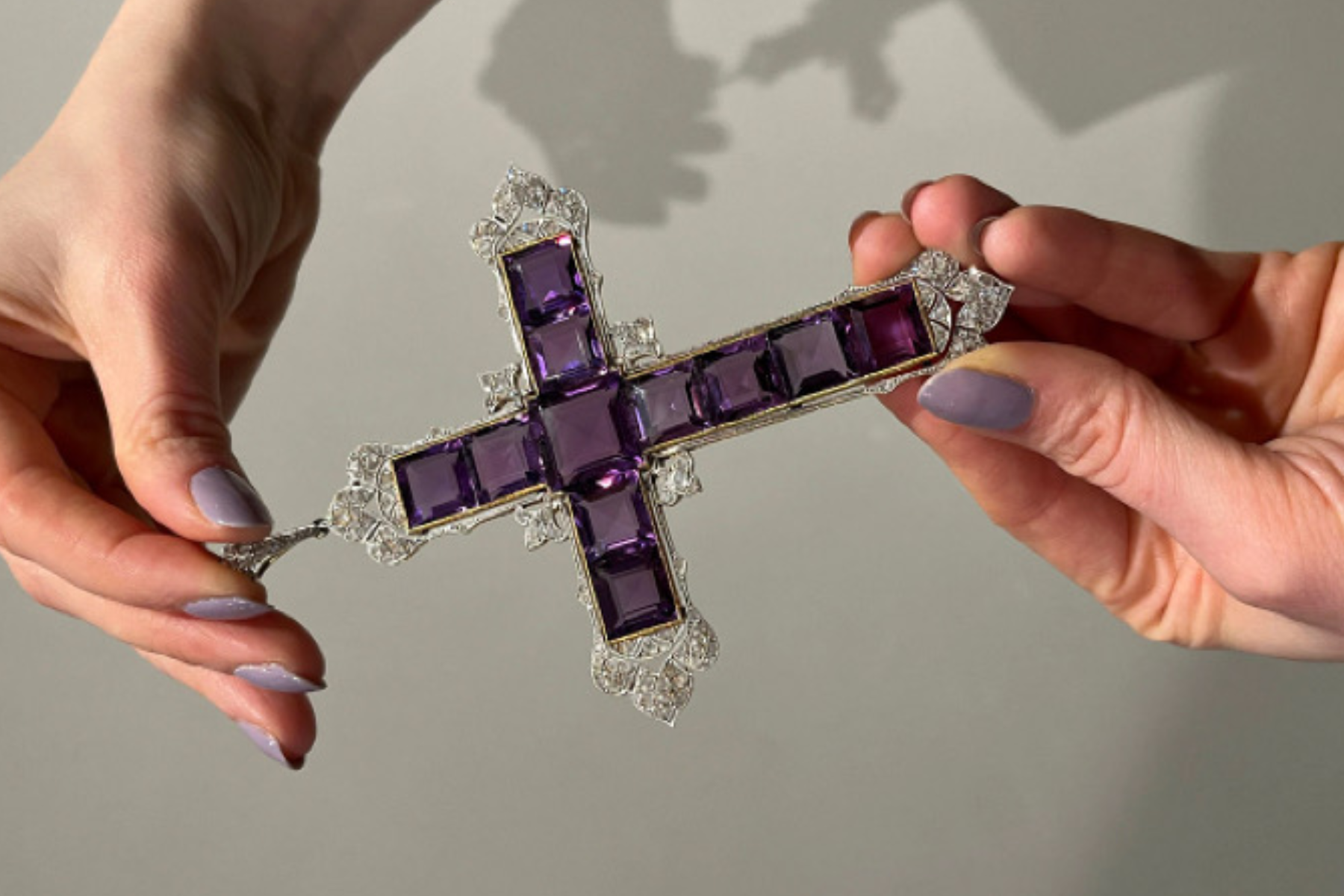 The group also mentions that Princess Diana had a close relationship with the jeweler and that it was because of this bond that she chose to purchase the engagement ring she wore in 1981 from the same establishment.

In the past, Kardashian has garnered attention for wearing iconic pieces from various pop culture eras.

She caused an uproar on the internet when she appeared at the 2022 Met Gala wearing the same crystal-embellished Jean Louis gown that Marilyn Monroe wore when she serenaded John F. Kennedy on his birthday in 1962. The occasion was John F. Kennedy's birthday.

The iconic champagne-colored silk soufflé dress featured a curve-hugging silhouette and a scoop neckline. It was borrowed from the Ripley's Believe It or Not Museum in Orlando, Florida, and was located in the state of Florida.

Kardashian went to great lengths to transform herself into the Hollywood legend, going so far as to bleach her hair platinum blonde for "14 hours straight" and following a diet that excluded both carbohydrates and sugar.

Why Do Kardashians Love Royal Jewelries?

There is a good chance that the Kardashians, like many other individuals, find the elegance and majesty of royal pieces of jewelry to be appealing.

It's possible that they also take pleasure in the prestige and status that comes along with wearing such high-end products. In addition, because they are famous people, they might also wear various kinds of jewelry with the goal of following fashion and projecting a particular image. 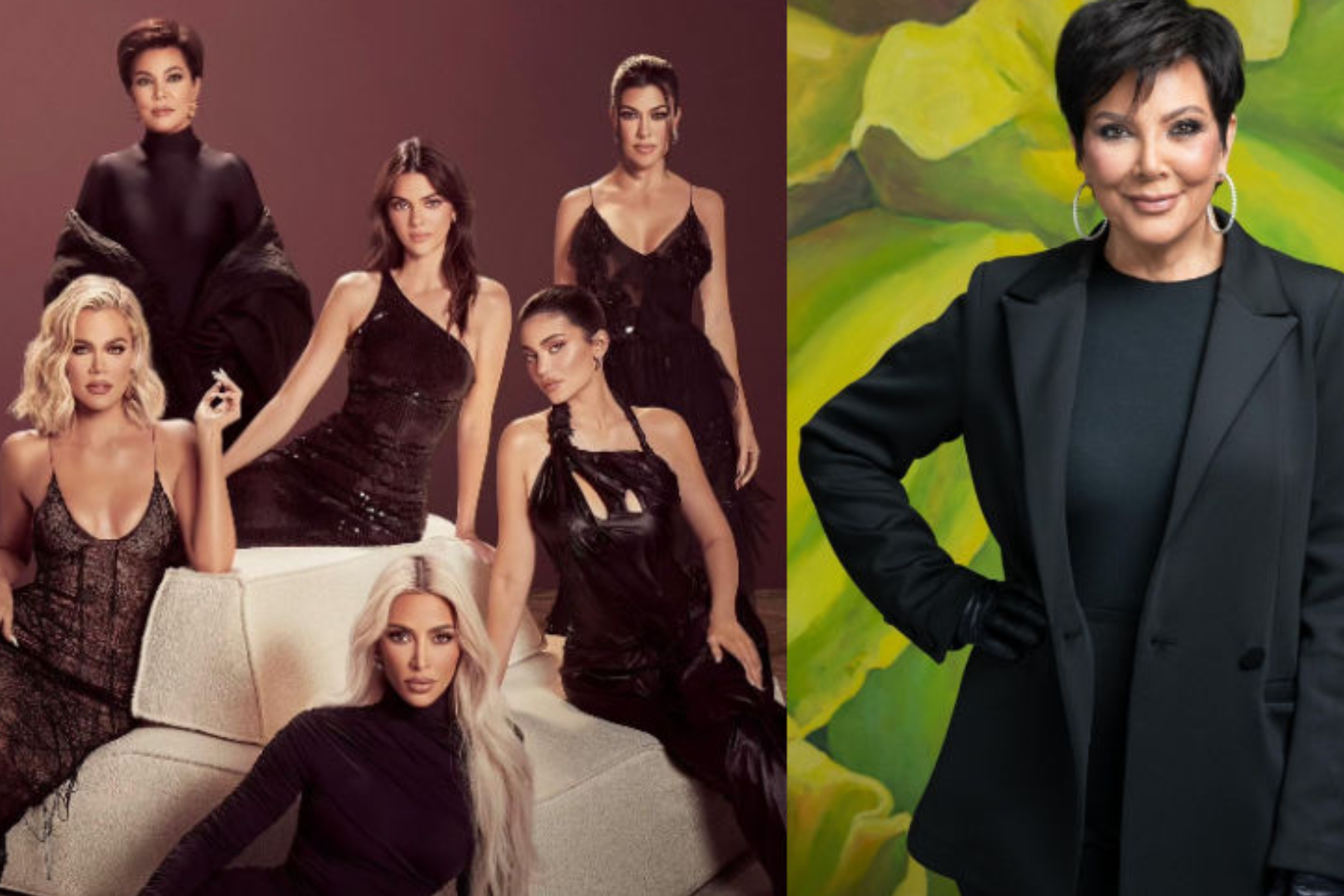 The Kardashians have certainly played a significant role in popular culture and have become well-known for their luxury lifestyle. They have built a brand and image around their wealth, fashion, and beauty, and have become successful businesswomen in their own right.

They have also been associated with luxury goods and services, and have been featured in numerous advertisements and campaigns. However, whether or not they are considered the "new luxury girls" is a matter of opinion.

There are many other celebrities and individuals who also embody luxury and exclusivity.