Hebrew Colors Chart - A Gemstone That Corresponds To Each One 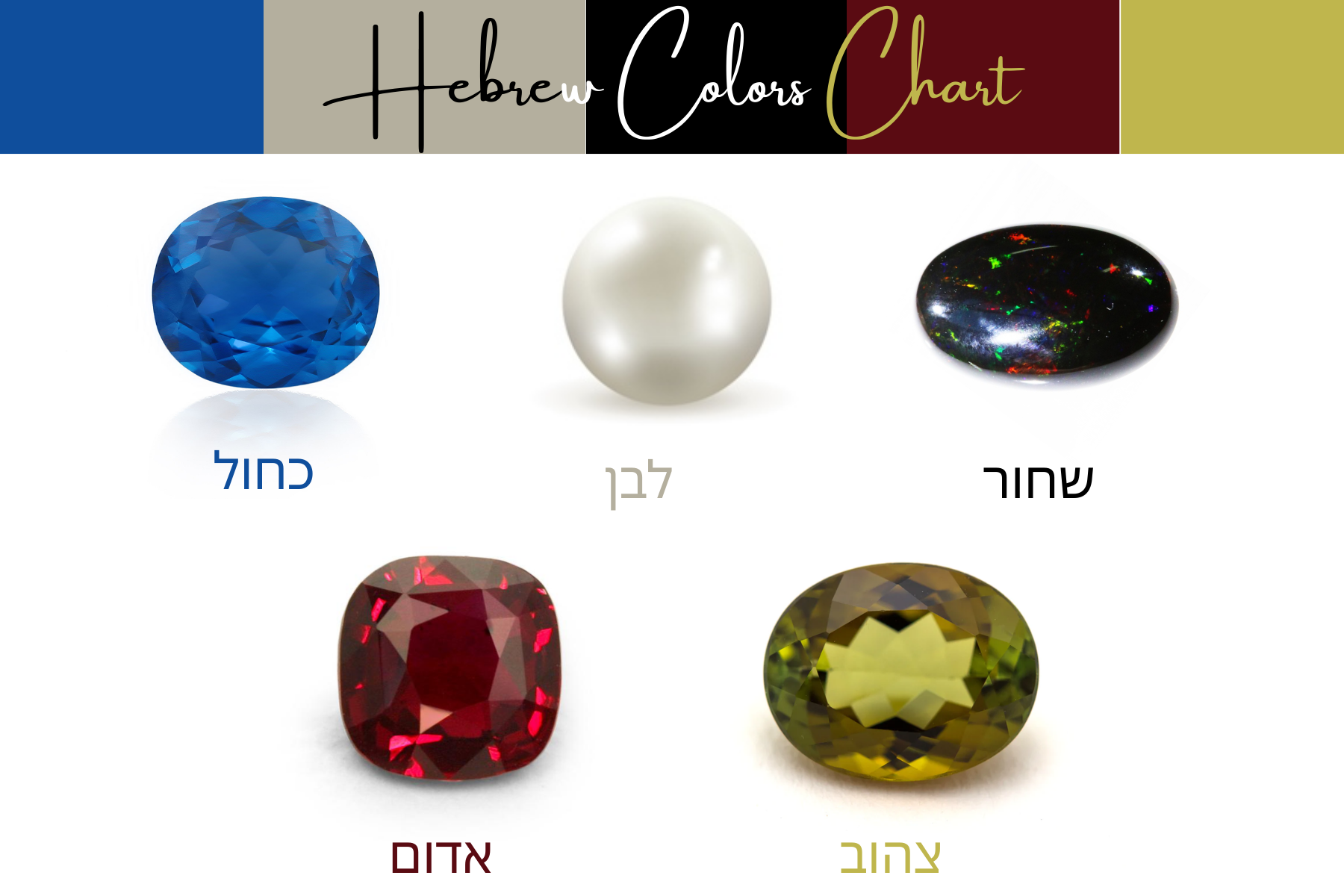 Color is a powerful tool for communication that may be used to express action, influence emotion, and even influence physiological reactions. Colors can be used to do all of these things.

There is evidence that looking at certain colors might cause an increase in blood pressure, a faster metabolism, and strain on the eyes. Because of the significance of colors in Hebrew culture, each color has its own special meaning.

There is no way that we can deny that this page has informed us of everything there is to know about gemstones and that each gemstone has its own unique color.

But for the time being, we are going to focus on the Hebrew colors chart and discover which gemstones are linked with each of the different colors.

Common Colors In Hebrew - Finding Your Own Gemstone

Here are the five Hebrew colors with each of their gemstones:

One of the most important colors in Hebrew is blue, and its name in the language is pronounced ka-hol. In addition to being one of the two colors that make up the Israeli flag and the color of both the sea and the sky, blue is a color that has a significant meaning for both Israel as a whole and Judaism.

Did you know that the Torah has multiple mentions of the color blue? If not, you should know that it does. If you had to offer priority to one of the colors used in Hebrew, I would recommend blue. You'll find yourself making regular use of it.

Gemstone: Blue sapphire is said to be the best stone for the blue Hebrew color, it brings luck, loyalty, happiness, and love. It is perfect for engagement rings because of what it stands for and how strong it is.

The color white, which is known as in Hebrew pronounced lah-vahn, along with the color blue make up the majority of Israeli national symbols. This color is used in a lot of symbols, flags, and activities all around the world.

The salt crystals that can be found in the Dead Sea are among many favorites. It is white, and when held up to the light, it glitters. It is easy to forget that one is in the middle of a desert while one is enjoying the breathtaking snowfall atop Mount Hermon in the winter.

Gemstone: People say that pearl goes well with the Hebrew color white. Pearls are a sign of innocence, purity, faith, and honesty. They are linked to the moon's energy and have been used to make people healthier and make giving birth easier.

The word for black in Hebrew is pronounced shah-chor, and as you are already aware, black is the color of clothes that makes you appear to be slimmer and trimmer. (this action is not recommended for use on the hottest days of summer).

Many used this color to have more energy and attract someone's eye since it is very elegant.

Gemstone: You can get lucky with black opal. It has to do with the Hebrew color black. It brings in good vibes and good energy. This means that Black Opal makes you feel better, gives you more hope, and brings you opportunities.

The word "red" is pronounced ah-dom in Hebrew, and it has many different meanings depending on the context in which it is used. The word "adom," which means red, is where we get the color connection to the creation story and its central word "adam."

The strong relationship between the physical, methods usually becomes now even tighter: red, adom is the color of the dam, blood.

Gemstone: The ruby has come to stand for love and loyalty. It was once thought to keep bad luck and sickness away. Early cultures, including the Hebrew cultures, valued the gem because they thought that because of its red color, it held the power of life.

Yellow in Hebrew is pronounced: tzah-hov. This color is also appropriate for a wide range of uses. Do you know of anything else that is yellow that has a significant amount of importance in the land of milk and honey?

Yellow is a color that may be seen rather often in the streets and alleys of Safed as well as in the old city of Jerusalem.

Gemstone: Yellow tourmaline is linked to the Hebrew yellow color because it helps people think clearly and have confidence. It helps you set goals and gives you courage, so you can face problems head-on with confidence and strength.

What Does Color Green Mean In Hebrew?

What Does Color Blue Mean In Hebrew?

Heaven, the Holy Spirit, and authority are represented by the color blue. The color purple is linked with the priesthood, kingship, royalty, mediation, and prosperity.

What Does Yellow Mean In Hebrew?

People say that yellow stands for faith, the glory of God, being blessed, and happiness. Even so, there are two Hebrew words for yellow in the Bible. First, there are charuts and tsahob. This refers to the color of a sick person's hair or skin.

Because all things with colors can be linked with anything, it is simple to find the right gemstone for your preferred Hebrew color. You can now choose from the five most common Hebrew colors and their corresponding gemstones.