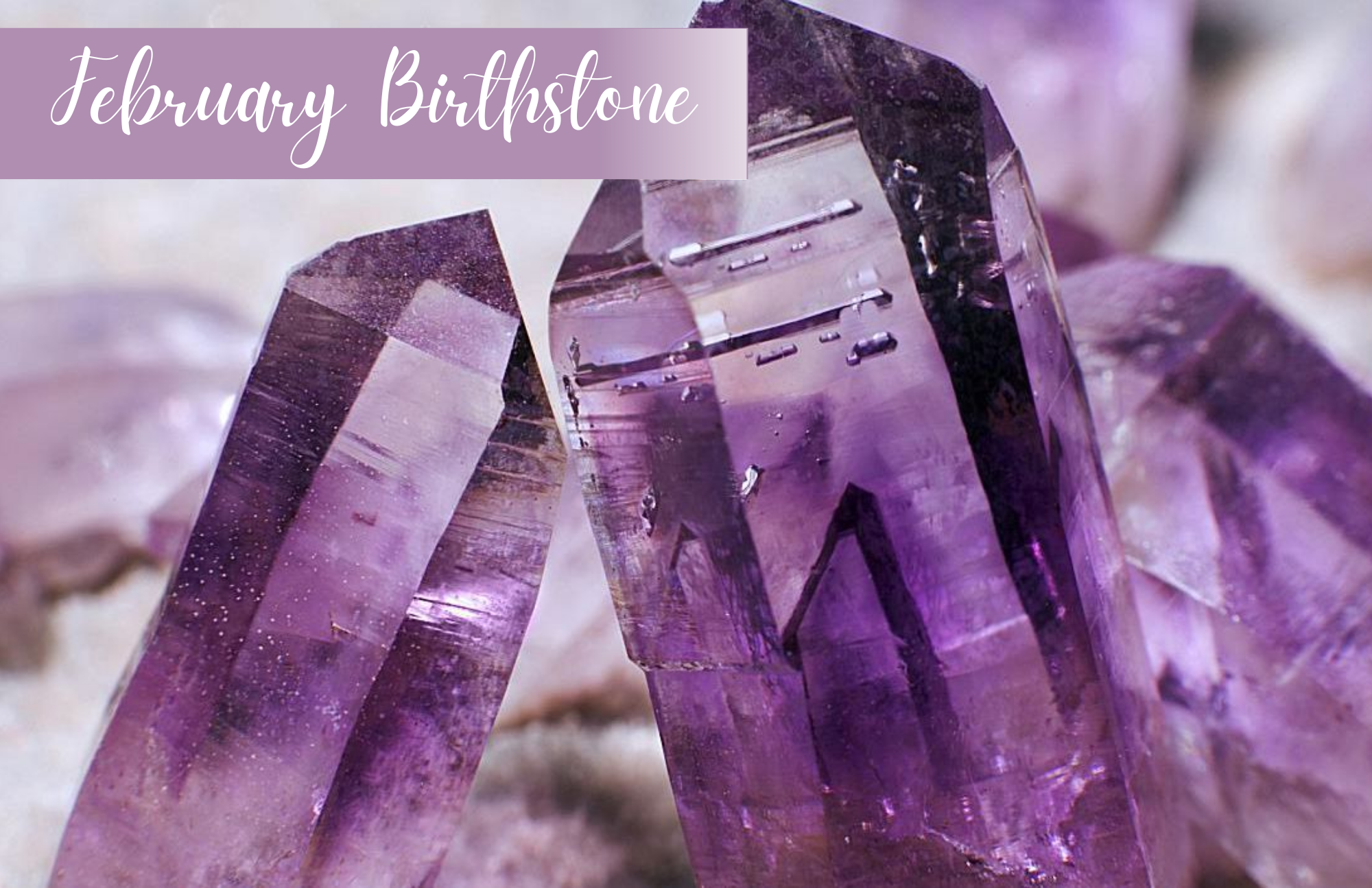 Amethyst is a type of quartz that is purple and has been used for a long time.

It is one of the February birthstones, and it has always been popular.

Known as the official February birthstone, it makes a perfect gift because of its rich purple colors and amazing versatility, which makes it great for any kind of jewelry.

What Exactly Is Amethyst, And Where Did It Come From?

All About February's Amethyst

Amethyst is a type of quartz, and its gemstones can be any shade of purple, from the lightest lilac to the darkest purple.

For a long time, people have thought that amethysts with deep, rich purple colors are the most valuable of these natural crystals and that jewelry buyers prefer this color.

But the Rose of France, which is a very light lavender amethyst stone, is becoming more and more popular.

It was first found in a volcano in Mexico called Chalchihuites.

Amethyst is a type of quartz that is opaque, which means that it doesn't let any light through.

Since ancient times, the stone has been used as a decoration. In many cultures, people thought it has magical powers and could heal.

A Christian priest named Valentine was said to have worn an amethyst ring with a picture of cupid carved into it in the third century AD.

Possibly, he was a bishop. There are more than one story and more than one Valentine. At the time, it was against the law for Roman soldiers to get married to Christians. 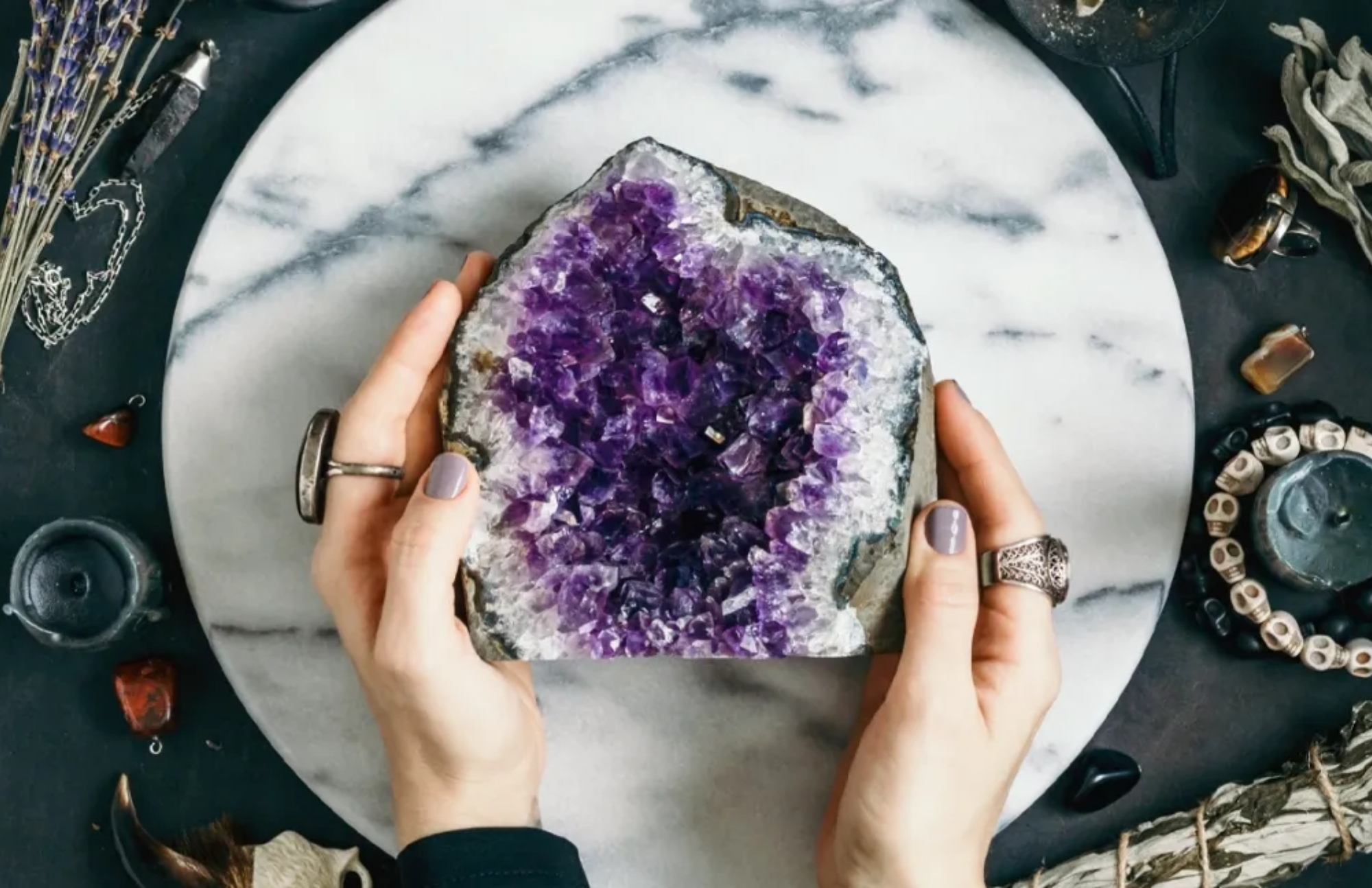 An amethyst stone on a table carried by a woman, as well as several items for healing activities

We all know that the month of February is cold because it is the winter season. That is the coldest weather of the year.

People also started looking for ways to protect themselves from the cold and winter at that time.

One way was to wear amethyst jewelry.

That's why people think that if you wear amethyst during the winter, it will keep you warm and keep you safe.

Amethyst is also a stone that has been worn as jewelry and used in spiritual rituals for hundreds of years.

It is also one of the most popular stones for people who believe in astrology because it is said to increase intuition and creativity and protect against negative energy.

Actually, this has a lot of properties given by so many people who have already tried using it. According to one of them:

“Amethyst signifies peace, temperance, serenity and royalty. Wearing this birthstone during the month of February may strengthen relationships and provide courage when it is needed.”

When people before are drinking, they can't control themselves. They will be drunk and lose their minds, resulting in them getting poisoned and close to any possible harm.

People in the Middle Ages thought that amethyst could protect them because its name comes from the Greek word amethystos, which means "sober" or having the ability to not get affected by alcohol.

Other Ways You Can Use Amethyst In Your Life And Home

It can help people calm down when they are feeling anxious or stressed.

You can use amethyst to clean your aura, protect yourself from negative energy, improve your psychic abilities, calm your mind and body, attract love, sleep better, and more.

People also say that it can heal, clean, and purify your physical body. Amethyst looks best in a necklace or a bracelet.

It can also be worn as a ring or pendant on the body.

Endless Designs Using Amethyst To Have A Great Birthstone 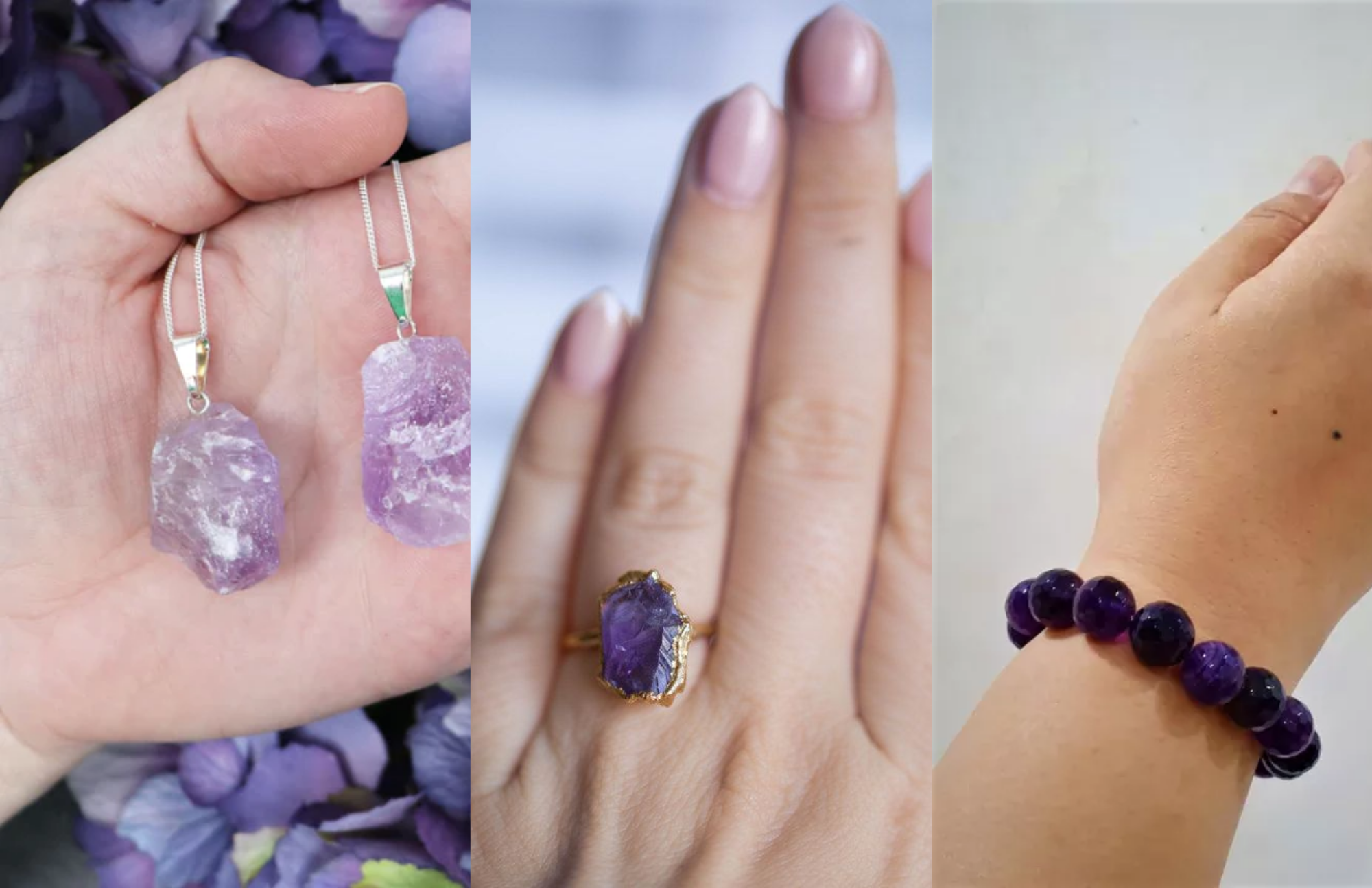 The three different types of jewelries made of amethyst

For those people who are born in February and don't want to miss the chance to get the benefits that are given above, the amethyst birthstone is often set into rings, earrings, necklaces, bracelets, and pendants.

You can try one of these so you won't get far from your amethyst birthstone.

Additionally, it looks great on people who like the color purple.

Amethyst is a very popular purple stone that is used in a wide range of jewelry and other decorative items.

Because it looks so nice, amethyst goes well with many other stones, including diamonds. Amethyst is often the main stone in a cocktail ring.

It can also be the center stone in an engagement or promise ring, or it can be the February birthstone in a ring.

Also, this is totally good with jewelry because, with a 7 on the Mohs scale, amethyst is a durable jewelry gem as long as the right steps are taken to keep it from getting scratched.

Just make sure that you won't knock or drop it, the stone can be damaged if that happened.

Always protect from any hard surfaces because they may chip or crack.

Store your beautiful amethyst in a jewelry bag or pouch when you're not wearing or enjoying it.

Is February's Amethyst A Guided Stone Or Crystal?

There are lots of people who surely asked the same question but there isn't a simple answer to this question. The purple color and hardness of amethyst are what make the stone special.

One myth about amethyst is that it is a stone that brings people together. This story has been told for a long time and has been passed down from generation to generation.

Depending on how you look at it, this stone could be called either a guided stone or a crystal.

In February, here are some tips for buying amethyst jewelry: 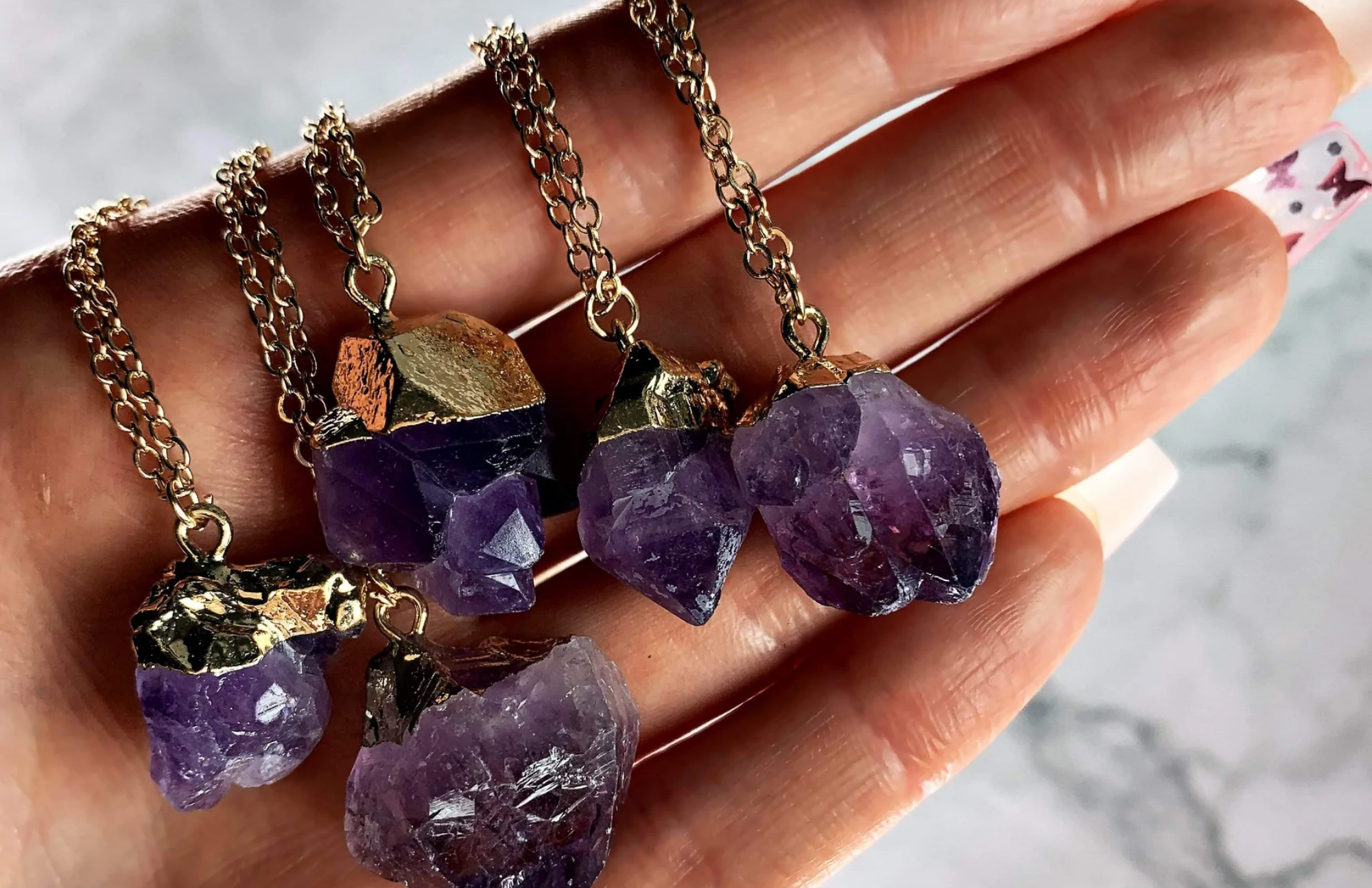 These amethyst crystals have red and shiny, long flakes of hematite mixed in with them. They roughly point toward where crystals grow. This happens sometimes in amethyst, but goethite needles are much more common.

Will Amethyst Fade In The Sun?

If you leave your amethyst out in the sun or near other sources of UV light for too long, the color will fade. The color of amethyst will also fade if it is heated. Sometimes, instead of gray or clear crystal, you'll get bright yellows that look a lot like citrine.

How Much Is The Amethyst Worth?

Before the 19th century, when large deposits were found in Brazil, amethyst was as expensive and prized as ruby and emerald. Even in the highest grades, amethyst is very cheap to buy today. Prices per carat range only from $20 to $30. Some of the purest pieces of the gem cost about $40 or $50 per carat.

A person who loves the color purple should absolutely treat him/herself to this February birthstone. This exquisite purple gem is not only stunning, but it is also quite affordable, making it the ideal present to give to someone whose birthstone is amethyst.