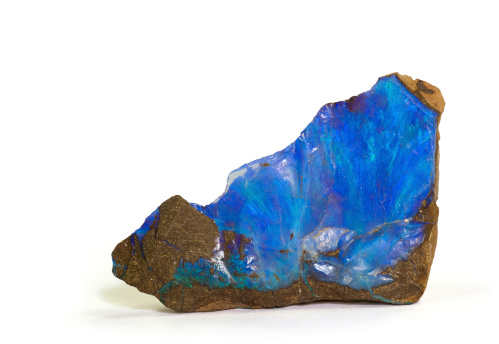 Boulder opal is a type of rock that is made up of thin seams and patches of opal that are surrounded by or attached to the natural rock that it came from.Cutter: The cutter looks at this rock and thinks about how to cut the best gem from it.That gem could be cut to show the seams and patches of precious opal as they look in the rock they live in.There is another way that a gem could be cut: It could be cut so that the front side is made of a thin strip of opal and the backside is made of different rock.

Using "boulder opal," some people think, is a clever way to use small seams and patches of precious opal that are too small to cut into gems of solid opal. This cutting style is called "boulder opal."Boulder opal, which is also called "Natural Opal Type 2," is also known by this name.

The Connection To Its Host

You can't get this opal out of its host stone without hurting it, and the seams of opal are so thin that it wouldn't be worth the trouble. It's hard to buy rough boulders because you don't know what's inside and the risk is huge.

The Origin Of Boulder Opal

Boulder opals are only found in the state of Queensland, which is in the country of Australia. Many new things were found in the 1870s. It wasn't until the 1890s that boulder opal was brought to Europe, and it has since gained its name and value in the gem industry. There are a lot of big opal fields in this area, like Quilpie and Winton.

Why Is It Called Boulder 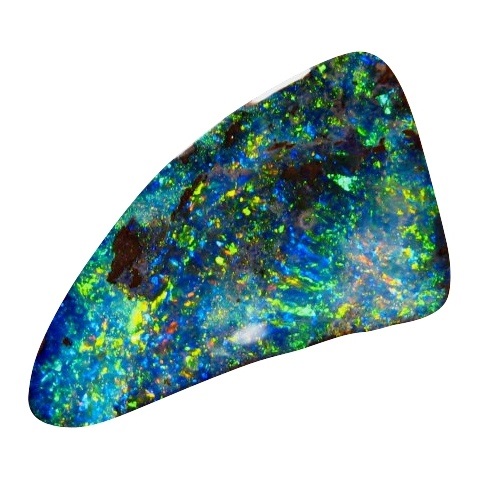 Boulder opal is a type of opal that is very rare and colorful. Boulder opal is made from large ironstone boulders or big rocks that are found under the ground. This is why they call it "BOULDER."

Boulder Opal is a rare stone, but it's easier to get than its cousin, black opal, which is also rare.Because boulder opal comes from a large area that is 200 to 300 kilometers wide, only a small part of it has been looked at. Because of this, it can be said that it has a bright future ahead of it.

Why Boulder Opal Is Pricey

The Australian boulder opal is a beautiful thing to look at. Its colors change depending on how it is looked at. These multiple bursts of color are called opalescence. These colors can be big and small in one color, or small and big in another color. Cost is based on how many and how far apart these colorful flashes are and how firm they are.

Another thing that has made the boulder opal stone more pricey is how much time it takes to cut it after it's been mined. The process is done by hand, and this is to make sure that this delicate and beautiful gemstone is the right size and shape for the jewelry market. It takes a lot of high-quality work that must be paid for with real money.

You can only get Boulder Opal in Australia, and it's one of the rarest stones out there. But today, it isn't impossible to get everything you want. You can buy boulder opal online or at a store near you that sells it, so you can get what you want. So, if you want to buy boulder opal, make sure you buy it from your favorite shop. Also, there's a chance that they'll give you a deal.