Birthstones For Every Month - Discover Your Birthstone By Month 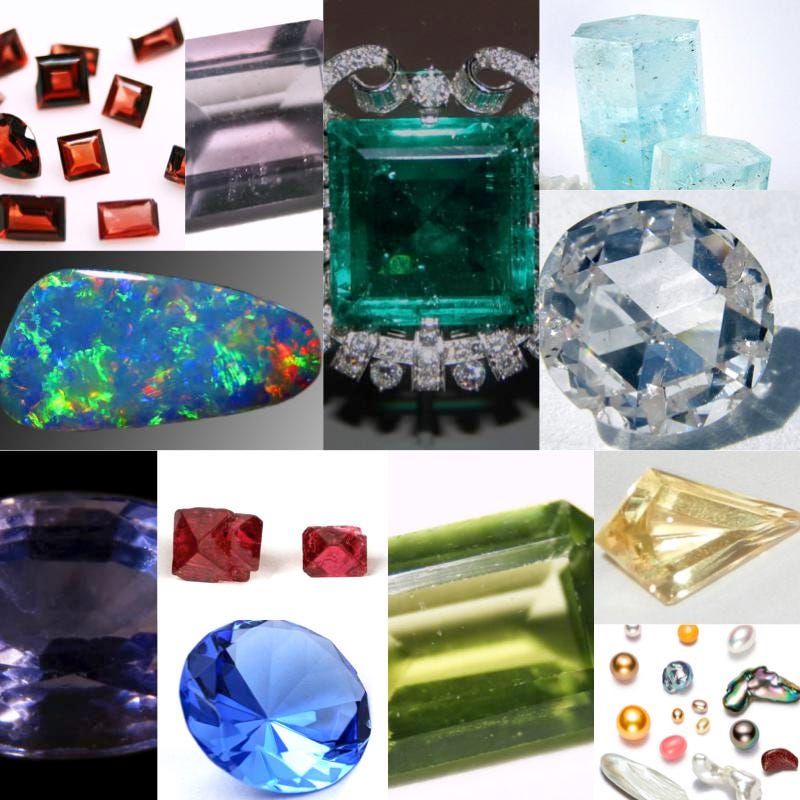 Birthstones for every month is just a single gemstone that is linked to the date of one's birth. Wearing a birthstone is thought to bring good luck and health.

Some gemstones are thought to have supernatural powers because of their relationship to the planets and how they look. Many cultures used to assign a specific gemstone to each sign of the zodiac to signify when a person was born. Over time, this tradition has moved from the zodiac to the calendar months.

The Origin Of Birthstones

The idea of a birthstone, a gemstone that corresponds to a person's birth month, is a new one. However, its roots go back to the Bible. Historians think that the twelve stones on Aaron's breastplate were meant to represent the twelve tribes of Israel when they were first made. However, Josephus and St. Jerome, who lived in the 1st and 5th centuries CE, began to link these gems with the signs of the zodiac. Probably, each stone had special powers when worn at the right time in the astrological calendar. Because of this, people tried to get and wear all twelve gems all year long as talismans or to help them get better.

Garnet is the traditional and modern birthstone for January. Garnets are made up of a lot of different types of minerals, but the deep red variety is the one that most people think of when they think of January. Some people think that garnets only come in red and purple. In fact, they come in a wide range of colors. You might even find a blue garnet that is very hard to find. Garnets are often used to show trust and friendship. This gem was thought to keep people safe when they went on trips in the past. Due to its hardness, garnet is a good choice for jewelry that is meant to be worn every day.

Amethyst has a lot of well-known meanings, like serenity and royalty. It's been thought for a long time that it can help people be brave and build stronger relationships. You can find it on both traditional and modern lists. It is the birthstone for February.

If you look for amethyst stones, you can find them in a wide range of violet colors. They can be pale lavender to dark, rich purple. While darker colors are more likely to bring in more money, your choice should come down to what color you like best. Amethyst is very hard and doesn't split. This makes it good for everyday use. 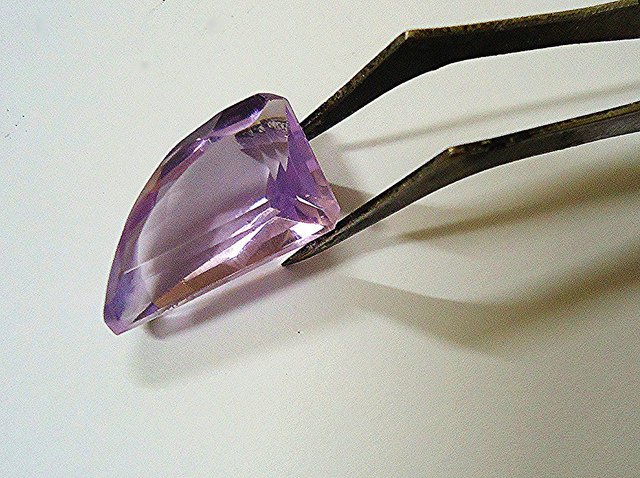 Aquamarine is the modern birthstone for March. This group of gems comes in a wide range of colors, from a deep blue to a blue-green that is almost clear. Dark stones are usually worth more money. There are a lot of people who prefer lighter, clearer stones in their jewelry. This gemstone is very hard and has very good transparency and clarity. Aquamarine isn't like other beryls in that it doesn't split or have other things in it. Because it is strong and durable, it is a good gemstone for making jewelry, so it is a good choice. 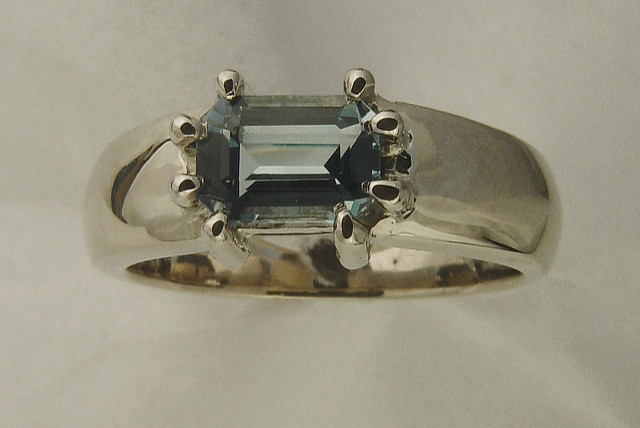 April has a well-known diamond as its birthstone, both in the past and in the present. They come in almost every color you can think of. Clear to black, and every color in between. Though diamonds that are colorless are the most popular jewelry choice, other colors, like yellow, champagne, and brown, are becoming more popular as well.

Love, marriage, and bravery have been linked to diamonds for a long time. They are often used to make engagement and wedding rings. Makes a great stone for any kind of jewelry. 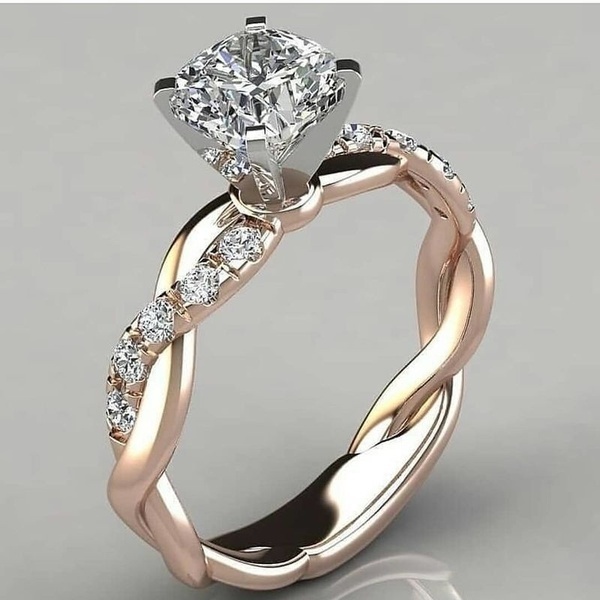 Another type of beryl, Emerald, has a lot of different meanings, like fertility, health, and loyalty. This May birthstone has been used as a symbol of rebirth for a long time. This green gem is said to have been Cleopatra's favorite thing, and it looks like it. Tradition says that this gem gives its owner good fortune, foresight, and youth. In this case, if you have a May birthday, wear your birthstone for good health.

It can be hard to find high-quality, clear emeralds, especially in larger carat weights. However, scientists have come up with many ways to improve the clarity and color of emeralds. 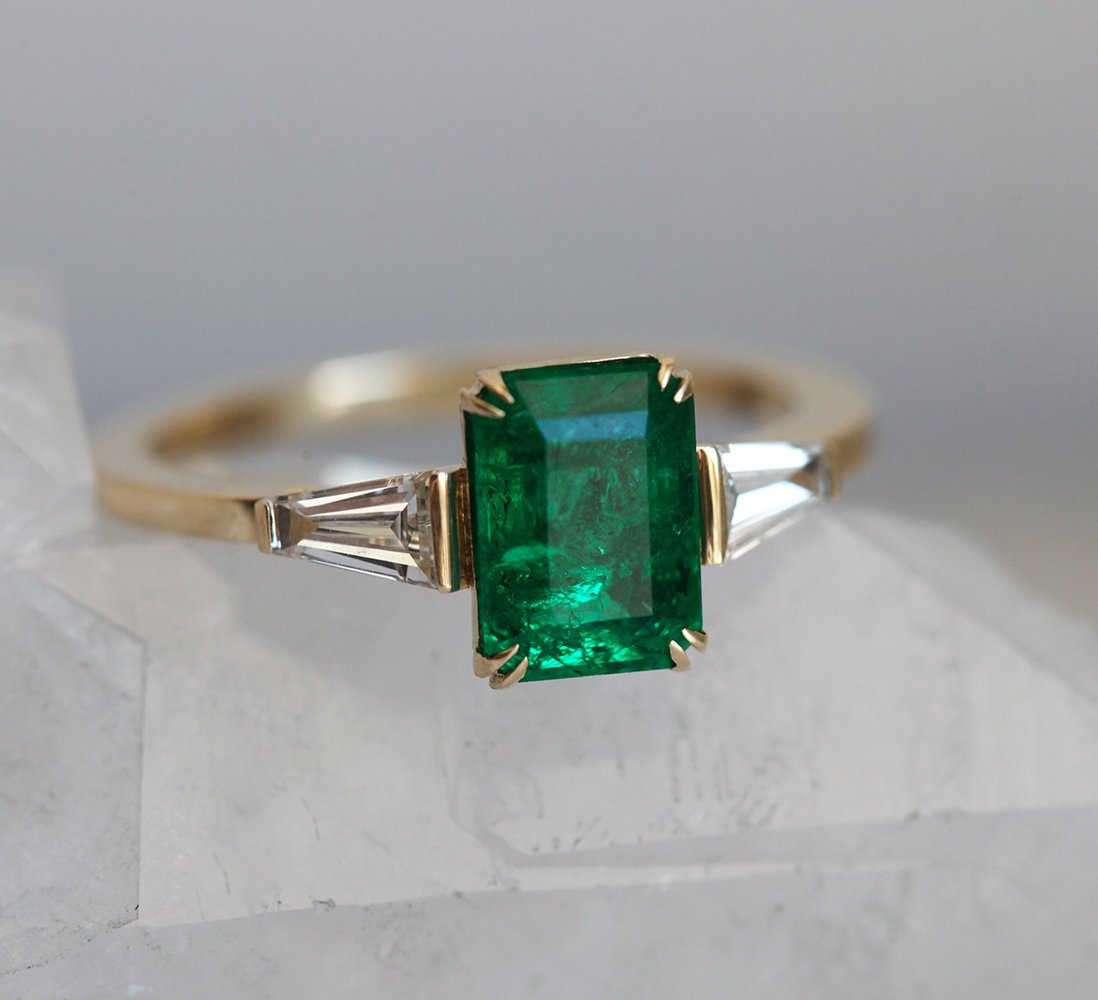 Pearls were the birthstone for June in the past. This natural stone has been used in jewelry for a long time and still is today. Many myths and legends have been made up about pearls, too, but there are also a lot of them. However, alexandrite, a gem that has only been around for a short time, has taken its place on the modern list.

In the 19th century, alexandrite was found in Russia. It was named after the future Czar Alexander II, who would become the next czar. This rare gem can also change color. Alexandrite looks green in the sun, but when it is lit by incandescent bulbs, it turns purple-red.

Alexandrite doesn't have any old meanings. However, some people think of it as a way to be more intuitive and have more fun. No doubt, natural alexandrites sell for a lot of money per carat. If you choose this modern birthstone, you may have to settle for a fake, but still very expensive, alexandrite if you want it. 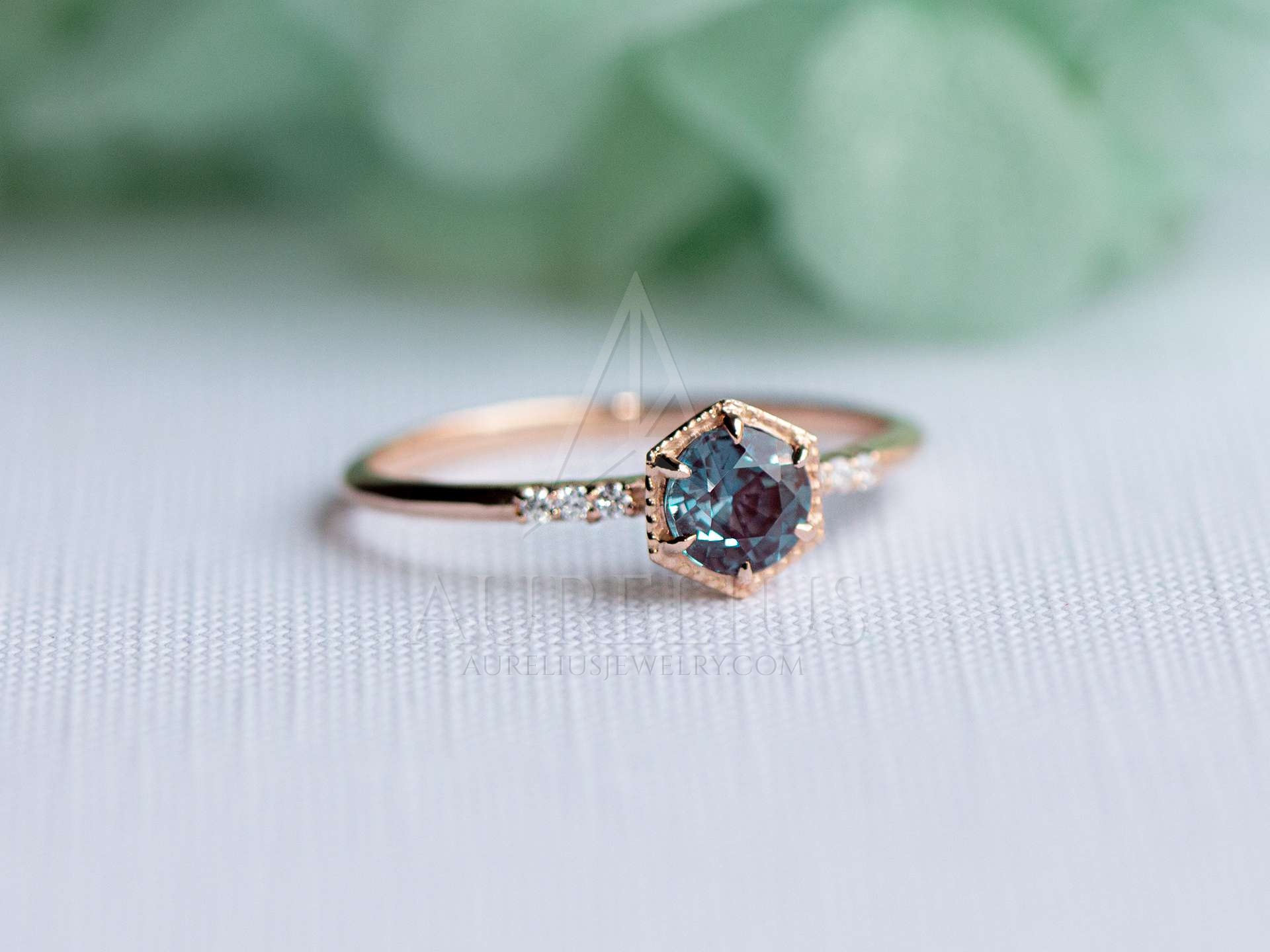 Round alexandrite ring with diamonds

Ruby is both a traditional and modern birthstone for July. Love, passion, wealth, and peace are just a few of the many symbols this gem has. Then, people wore them to protect themselves from evil and harm.

A very hard stone, medium to dark red rubies with little to no purple or orange usually sell for the most money. There are a lot of different types of corundum, and rubies are one of them. People who have this mineral are the red kind. All other colors, even pinks, are called sapphires.

The best rubies may be hard to find for you. However, you can find stones of good quality in a wide range of shapes and sizes. Ruby is a great stone for making jewelry. 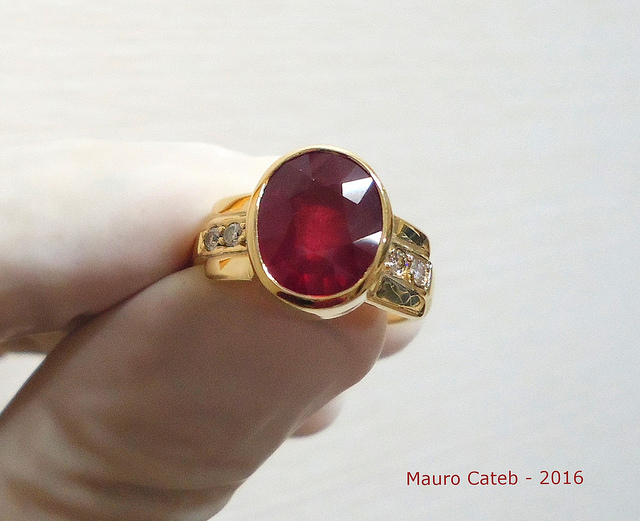 When it comes to modern birthstones, Peridot is for people who were born in August. There are a lot of different colors of this gem. They range from yellow-green to brown. However, the light green or lime green variety is the most popular one for August.

Traditionally, peridots were used to protect people from nightmares, evil, and enchantments. They were also used to show strength. It was thought that the tears of the goddess Pele were brought to the surface by volcanoes. 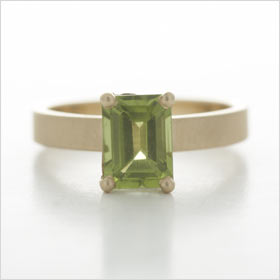 Sapphire comes in a lot of different colors, even though it's usually thought of as blue. In fact, this September birthstone comes in every color except red. By definition, sapphire is a type of corundum that is not red. Sapphires have a lot of symbolic meanings and a lot of stories about them. This stone was thought to protect your family from harm in the past. In the Middle Ages, blue sapphires were worn by Christian clergy as a sign that heaven was at hand. For many people who love gems, these stones now mean wisdom, purity, and faith.

Strong sapphires make great gems to wear every day. Pure blue stones or blue stones with a green or purple tint are usually the most valuable. However, you can also choose beautiful pink, purple, orange, green, and yellow stones, as well as stones that don't have any color. Star sapphires are some of the most sought-after gems in the world, and they are very rare. 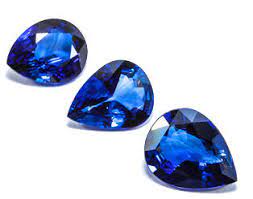 Tourmaline is the birthstone for October in modern times. These gems come in a wide range of shapes and colors, including multicolored stones that are very pretty. 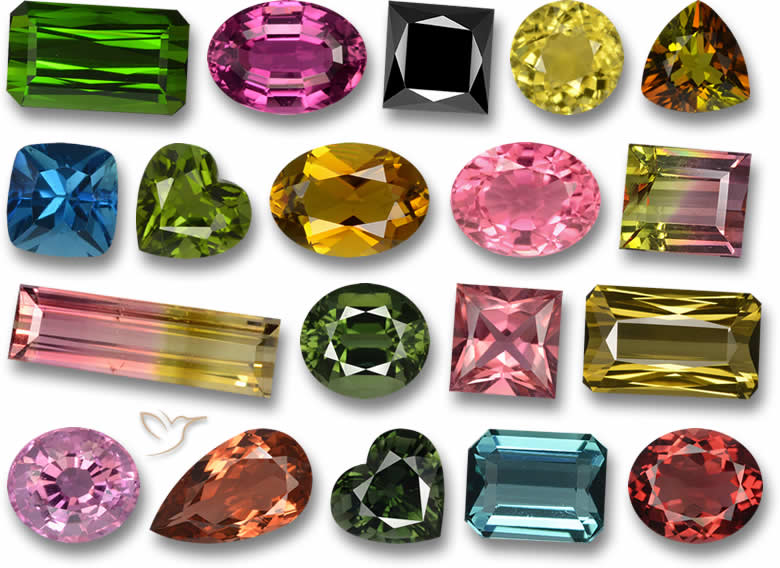 Then, before modern gemology, the only yellow stones were called topaz because they were all yellow at the time. In the early 20th century, gemologists said that topaz was a kind of gem that came in yellow, blue, pink, purple, and other colors, as well as many other types. So, the traditional birthstone for November changed to yellow or golden topaz. When it comes to birthstone necklaces and bracelets, you can choose the topaz color that you like the best.

Another modern choice for November is citrine, which is a pretty yellow gem. Because citrine is quartz and topaz is a different gem species, they are often mixed up. They also charge very different prices.

In the past, people thought that golden topaz could bring money and keep your mind and body healthy. It could also help your eyesight if you used golden topaz. Today, some people think that this gem is a sign of love and affection because of how it looks. 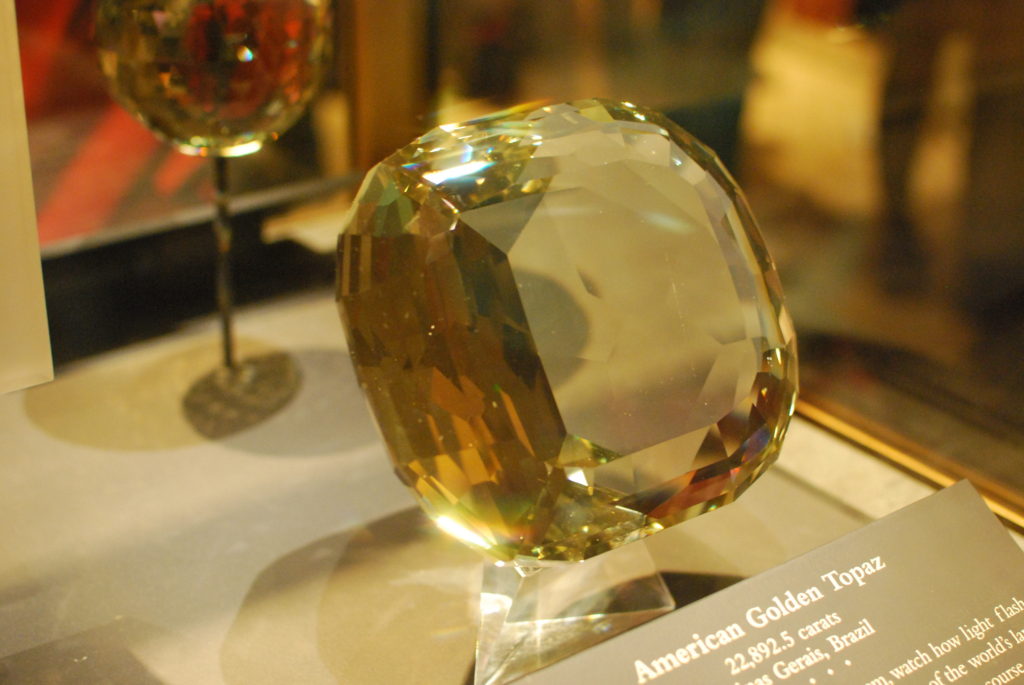 If you want to buy a December birthstone that isn't opaque like turquoise or lapis lazuli, you can buy tanzanite, blue topaz, or blue zircon instead.

Zircon comes in many colors, but blue stones are the official birthstones. Yellow, orange, green, red, and colorless zircons are also available. However, you can choose any color you want. Some people think zircons can help with pain and make you want to eat more.

When you buy these gems, look for clear stones with few to no flaws and the same color all over. 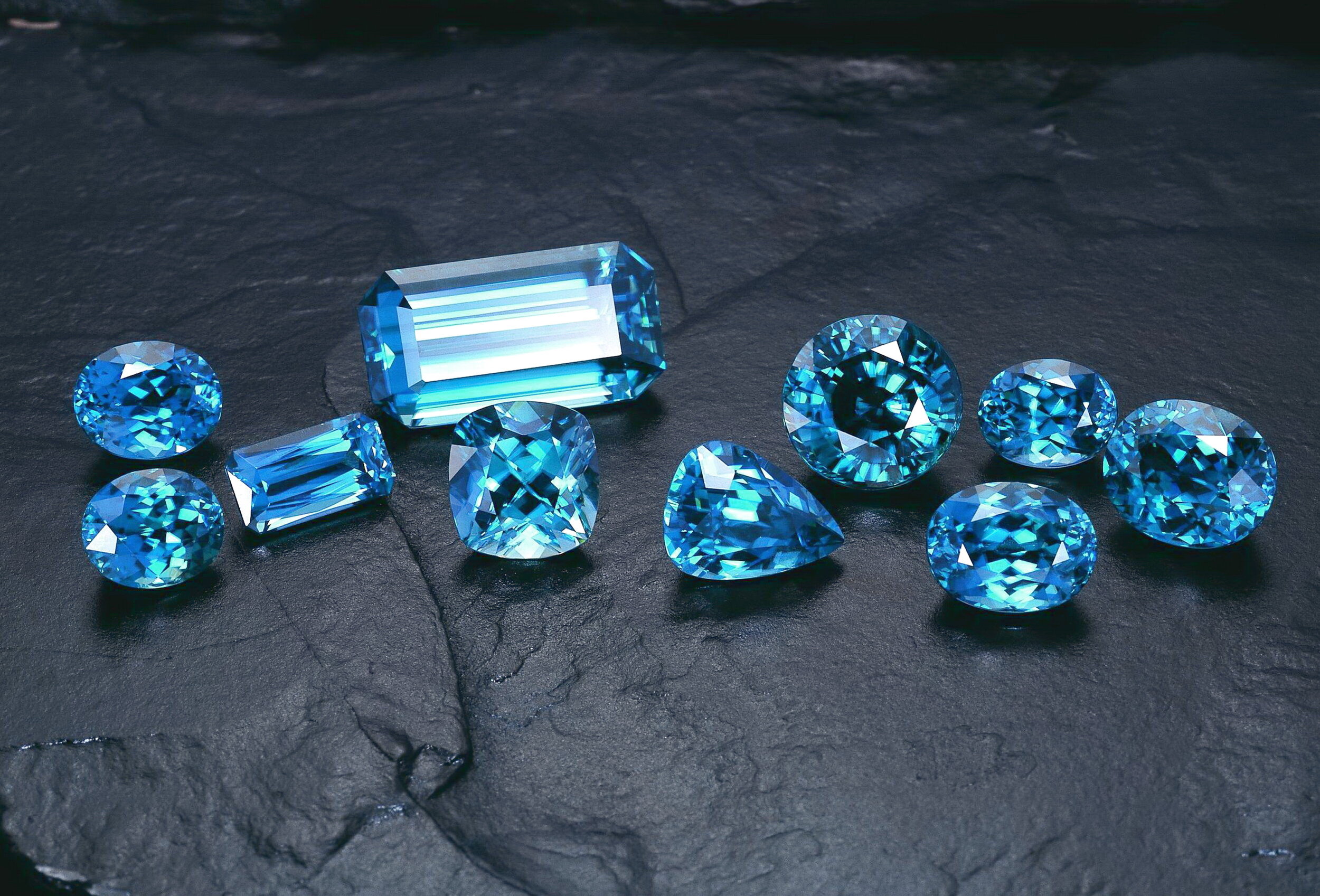 They are well connected to you because they are well aligned with your energies, which makes them feel good to you. All of these things are linked to your birth date or your astrological sign. They make you feel more energetic and help you connect with the world around you by emitting the right wavelength of light to you.