Birthstone January – Garnet As A Birthstone For Those Born In January

The beautiful gemstone Garnet is a good fit for people with January birthdays. Garnet is a stunning and versatile gemstone, and January babies are lucky to have it as their birthstone.

Though most Garnets are a deep shade of red, they may also be found in various other hues, such as orange, yellow, purple, and even vivid green.

Some Garnets, for example, can shift from blue to purple depending on the angle of view. Garnet is the birthstone January, and some think its actual worth lies in its supposed ability to make its wearer healthy, wealthy, and happy.

Due to the garnet's durability, pieces of Garnet jewelry dating back to the Bronze Age have been discovered. Garnet was also employed as an inlay material by the Egyptians as early as 3100 BC.

The ancient Egyptians viewed it as a metaphor for life itself. In the third and fourth centuries, the Garnet was one of the most sought-after gemstones in Rome.

Soldiers frequently carried this gem before combat for physical and spiritual defense, and individuals hoped to avoid spreading disease. Garnets were used by some ancient healers and sages, who put them in wounds and said how good they were for healing.

Jewelry made from Garnets has been popular for centuries. During the Middle Ages, Roman nobles liked to wear Garnets, and ancient Romans often used Garnets in signet rings.

Garnets were at the height of their renown during the Victorian era. Some of the most beautiful Garnet gemstone jewelry of the time was designed to resemble a pomegranate seed cluster.

Garnets are now often used in a wide variety of jewelry, from exquisite rings to breathtaking headpieces. Rare green or blue Garnets are stunning when set in pendants or drop earrings, but Garnets of any hue are beautiful.

Garnet is most often associated with its rich red color because of its strong relationship to the pomegranate. Still, it appears in a broad spectrum of hues, including greens, yellows, and even blues. The transparency of Garnet can range from totally opaque to entirely clear.

Garnet's Features As A Birthstone For January

Garnets are a class of silicate minerals with a general chemical makeup but can be found in various forms. The presence or absence of trace elements, including calcium, magnesium, iron, manganese, aluminum, and chromium, in garnet crystals, can be attributed to the conditions under which they grew.

As a result, garnets range in hardness from 6.0 to 7.5 on the Mohs scale and in hue from transparent to opaque.

Most garnets are created during the metamorphic transformation of sedimentary rocks like shale, which occurs when these rocks are exposed to extremely high temperatures and pressures.

This type of thing occurs at the intersection of two tectonic plates. The high temperature and pressure cause minerals to recrystallize into shapes more equipped to withstand extreme circumstances.

For some, the path leads to the creation of a garnet. Garnet can also be found in smaller quantities in other igneous rocks than granite.

Garnets are so hard that they typically maintain their form after the elements have eroded the metamorphic and igneous rocks they formed. As they settle, they become part of the sediment that eventually becomes soil, sand, or sedimentary rock.

Garnets are mined from these deposits because the crystals are less difficult to remove. Australia is responsible for almost half of the world's supply. India, China, and the US are other important contributors. 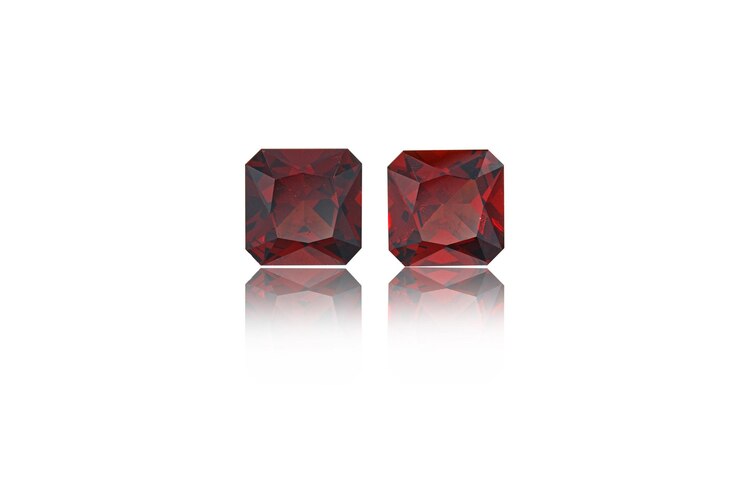 Meanings Of Garnet As Birthstone January

Many legends from many different cultures and eras center around the Garnet. People often think that if they wear a Garnet, they will be safe from harm, whether physical danger, mental illness, or bad dreams.

For countless years, garnet has been worn as a token of affection, a source of strength, and a catalyst for restoration and health. Roman soldiers used Garnets as amulets in the third and fourth centuries. It was also believed to make travel on great distances risk-free.

Royalty has long used Garnet as an amulet and fashion accessory due to the stone's reputation for providing strength and warding off evil.

In ancient Egypt, Garnet was believed to prevent nightmares and alleviate sadness, while Native American healers believed it could shield the wearer from harm and poison.

The Bible tells how Noah lit up the Ark with a Garnet diamond. For their belief that they would do greater damage on impact, Asian tribes employed Garnets as bullets in times of conflict.

Garnet was utilized in ancient and medieval medicine to treat inflammation and calm nerves. Garnets were thought to alleviate gastrointestinal distress and throat pain when worn as necklaces in the Middle Ages.

Today, many believe wearing Garnets would bring them steadfast love and devotion. It's also said to help one be more prosperous professionally.

Mythology Of The Birthstone January

Garnets, like other red gemstones like rubies and spinels, share many of their early history and mythology. In ancient times, red stones were known as carbuncles, and gemologists had difficulty telling them apart.

Many legends surround garnets. Garnets were thought to provide ancient warriors an advantage in battle. The Crusaders carried them to ward off illness and injury.

While Europeans employed lead bullets, ancient Asian warriors thought sparkling garnets, used as bullets, were more lethal. During fighting in Kashmir in 1892, the Hanza tribesmen thought garnet bullets were more efficient than lead and shot them at British forces.

It was initially thought that garnets, like many other valuable stones, had healing properties. Garnets were considered to alleviate sadness and protect their wearer from poisons, injuries, and terrible nightmares in the Middle Ages. Red garnets were used to reduce fever, while yellow garnets were used to treat jaundice.

Is Garnet A Lucky Stone?

Garnets have long been a symbol of undying affection, good fortune, and abundant wealth. Renowned for their therapeutic properties, they are said to boost circulation, skin tone, and heart health.

What Is The Color For January?

As a gift representing friendship and trust, garnet comes in a wide variety of colors, from the flaming orange of Mandarin Garnet to the lush green of Tsavorite Garnet and the most well-known hue, Pyrope Garnet.

Is January Birthstone Garnet Or Ruby?

Those with January birthdays are associated with the Garnet as their birthstone. Garnets are beautiful gemstones that may be set in various jewelry. Birthstones for January are often red, with tones ranging from pastel to deep.

What Are The 2 Birthstones For January?

Emeralds and Garnets are appropriate options for those with a birthday in January.

The birthstone January, Garnet, is available in a wide variety of hues, the most common of which is a deep red. Friendship and trust are common themes in depictions of this gem.

This stunning gem got its name from the Latin word for "seed," "granatum," because of its likeness to pomegranate seeds.