August Gem - A Wide Selection Of Beautiful And Unique Stones 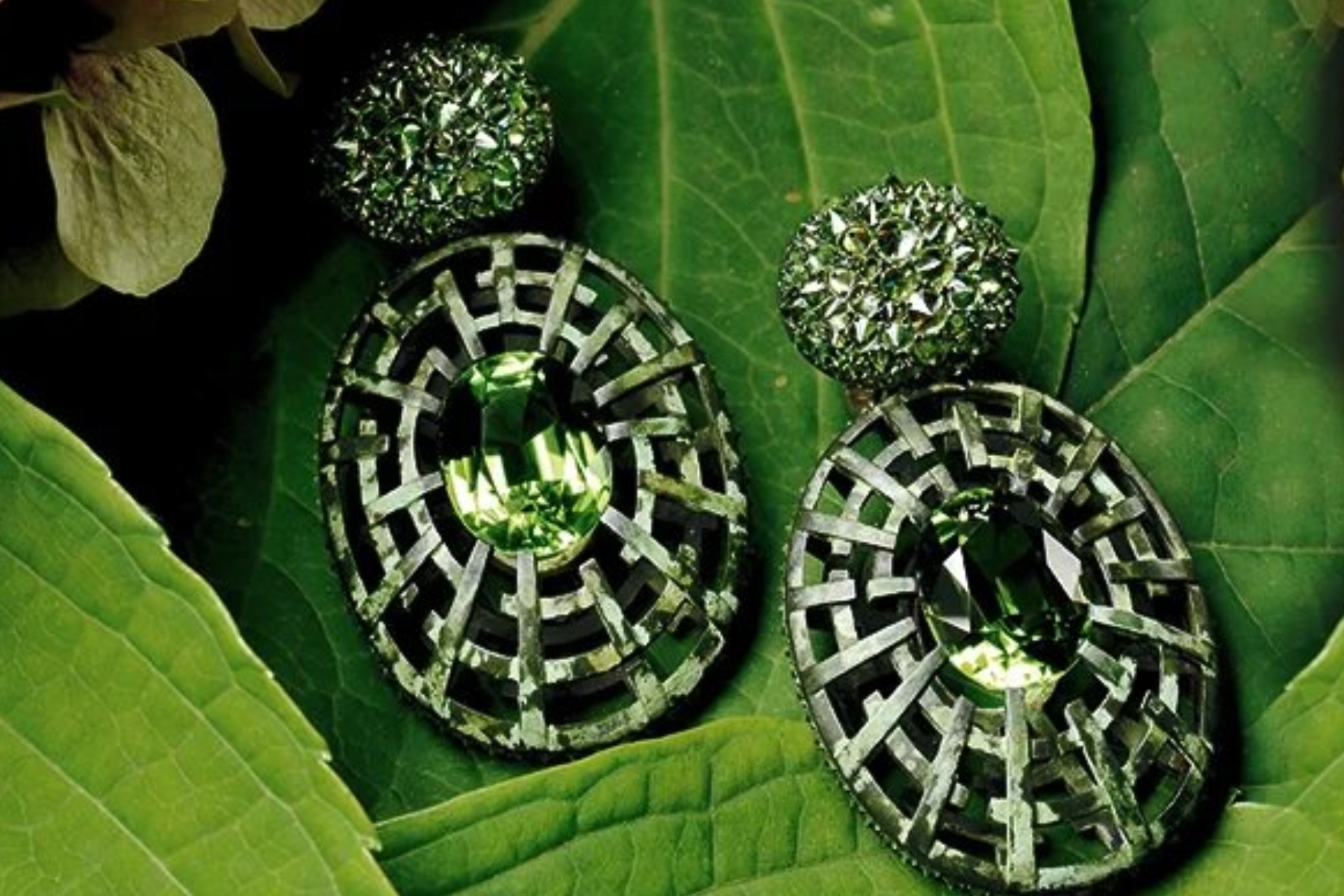 August is known for its hot summer weather, but it is also the month associated with a variety of beautiful gemstones. From the vibrant green Peridot to the rich red Spessartite Garnet, the August gem comes in a range of colors and styles.

These precious stones have been treasured for centuries for their beauty and healing properties. In this article, we will delve into the world of August gemstones and explore their characteristics, history, and significance.

Peridot is the birthstone for August. It is a bright green gemstone that is valued for its beauty and ability to heal. It is a type of mineral olivine and can be found in meteorites and volcanic rocks.

People think that the ancient Egyptians used peridot as a gemstone. They called it the "gem of the sun." Peridot was also very important to the ancient Romans, who often put it in jewelry and used it as a charm to keep away evil spirits.

People say that peridot has a calming energy that can help reduce stress and worry. It is also thought to have healing properties and to help with lung, sinus, and gallbladder problems. It is also said to improve emotional health and help people get along with each other.

Peridot can be a light yellow-green color or a dark olive-green color. It is usually found in smaller sizes, but big stones with more than five carats have been found.

Rich olive green is the best color for Peridot, which is also the most valuable. Arizona, China, Myanmar, Pakistan, and Sri Lanka are the most important places to find Peridot.

Properties Of August Gemstones And Their History 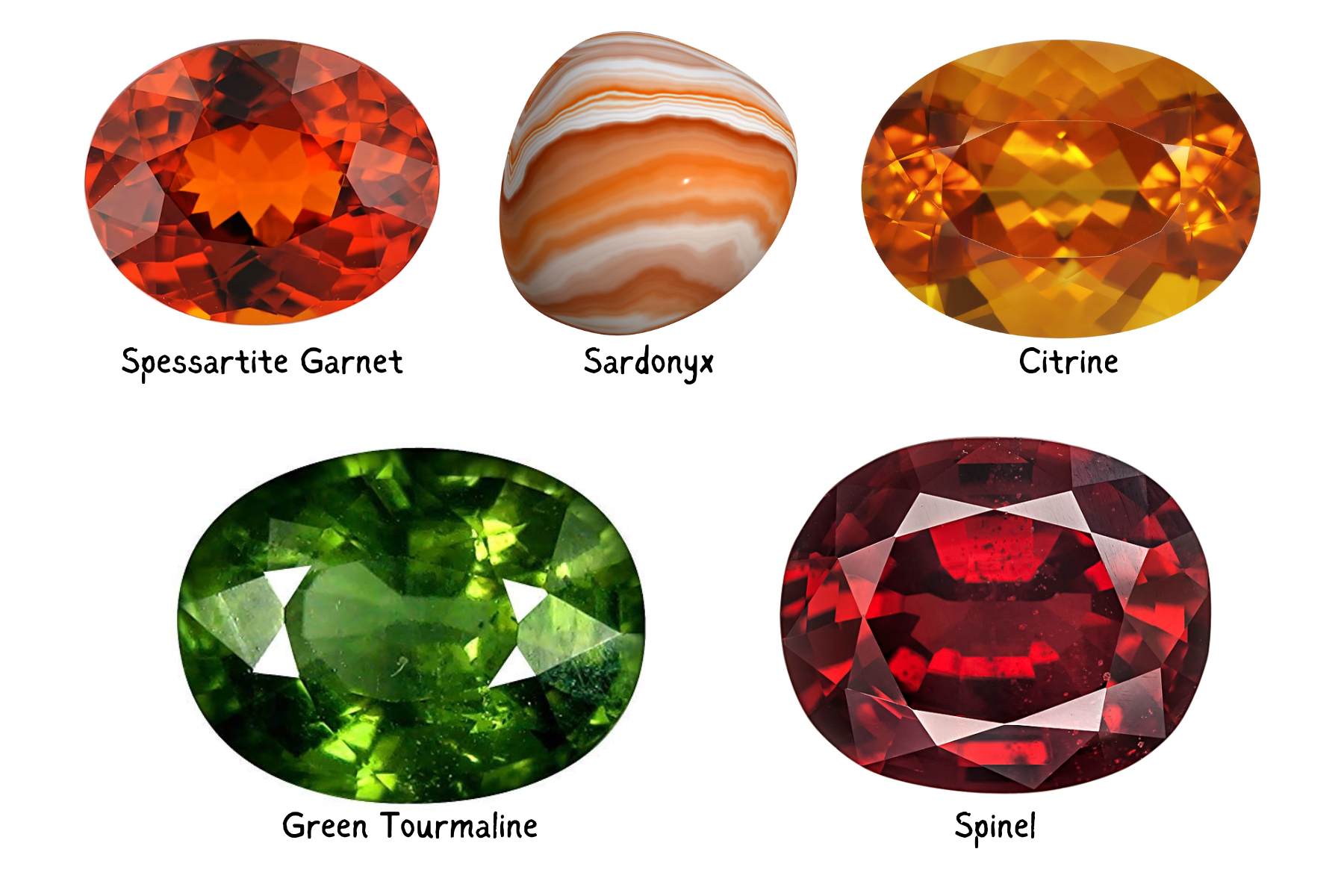 In addition to Peridot, there are several other popular gemstones associated with the month of August. Some of the popular August gemstones include:

Spessartite Garnet: Garnet is a relatively recent discovery as a gemstone, it was first discovered in the 19th century in Germany.

A vibrant orange-red gemstone that is known for its fiery color and brilliance. It is a variety of garnets and is found in a range of shades from orange to red. Spessartite garnet is considered a powerful stone that can help to boost energy and increase motivation.

Sardonyx: Another august gemstone, has been used since ancient times for its banded white and red color. A banded variety of chalcedony that is typically white and red in color.

Sardonyx is said to be a stone of strength and is believed to help with decision-making and communication. It is also believed to bring good luck and happiness.

Citrine: Another august gemstone, is said to have been used by the ancient Greeks and Romans as a talisman to promote wealth and abundance. A yellow-to-orange variety of quartz is known for its sunny color and is said to promote positivity and abundance. It is also said to help with self-esteem and is believed to have healing properties.

Green Tourmaline: A green variety of tourmaline that ranges in color from light green to dark green. It is a powerful stone that is said to have a grounding effect and is believed to help with emotional balance and self-confidence.

Spinel: Spinel is a lesser-known gemstone, it has a relatively short history as a gemstone, and it was first mentioned in historical records in the 14th century. Spinel is a gemstone that comes in a variety of colors, including red, pink, purple, orange, blue, and black.

It is a durable gemstone that is often used in jewelry and is said to have a calming effect and help with emotional balance.

Properties Of All The August Gemstones

August gemstone jewelry is popular and on-trend because of the bright and unique colors of stones like Peridot, Spessartite Garnet, Sardonyx, Citrine, Green Tourmaline, and Spinel. 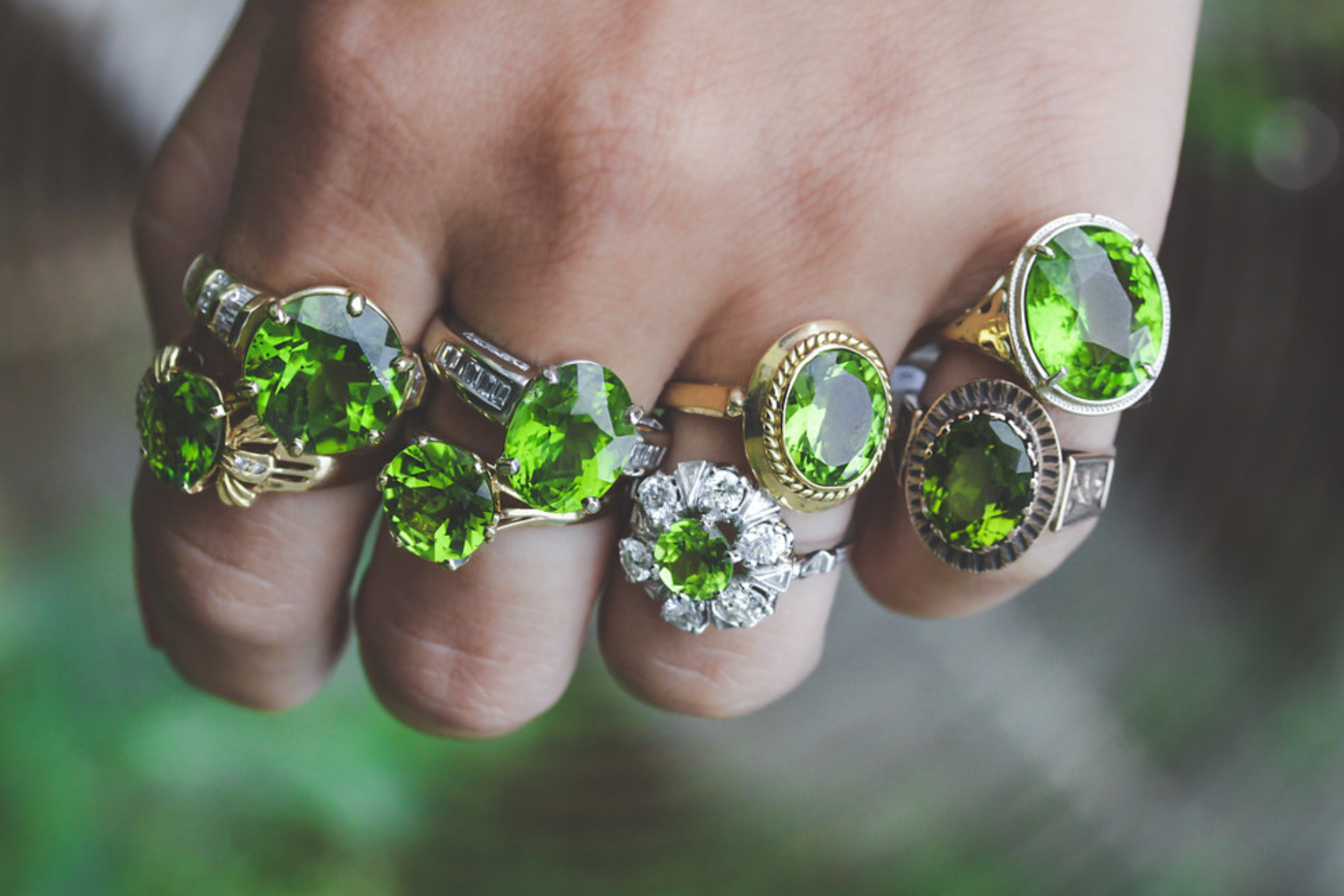 Eight Peridot rings are set on the fingers of a hand

These stones are durable, have healing properties and symbolic meanings, look good in minimalistic and organic designs, and are cheaper than other precious gems.

How To Care For And Clean August Gemstones?

To clean and care for August gemstones, you should handle them carefully and keep them away from harsh chemicals and high temperatures. You can gently scrub your August gemstones clean with a soft brush, mild soap, and warm water.

Don't use ultrasonic cleaners or steam cleaners on your gemstones because they can hurt them. It is also important to pay attention to the type of metal your gemstone is set in. Some metals, like silver, can change the color of the gemstone as they tarnish. 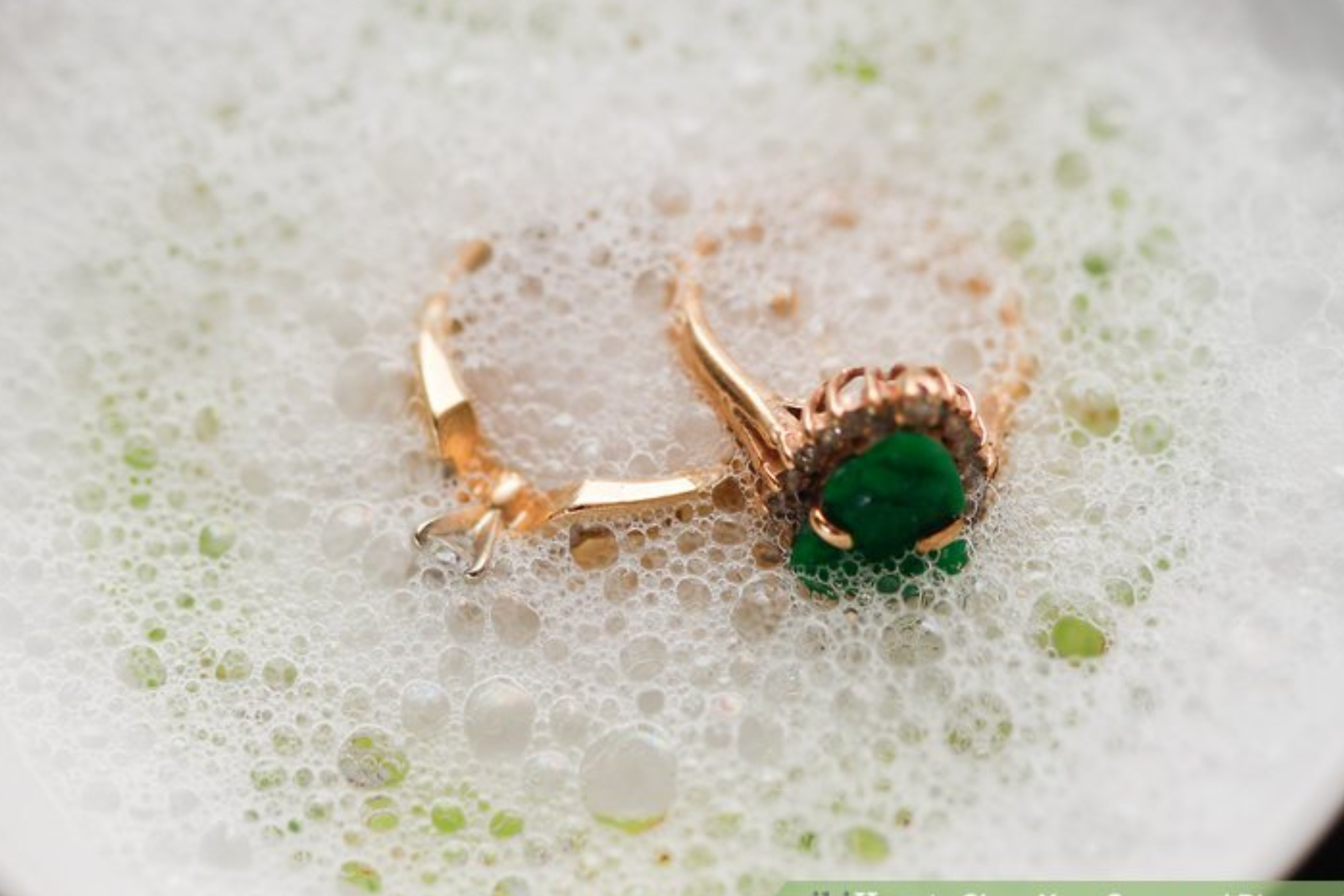 A Peridot ring on a warm water with mild soap

After you've cleaned your stone, use a soft cloth to dry it well. Keep your gemstones in a soft cloth or a padded jewelry box to keep them from getting scratched or broken. Also, you should take off your gemstone jewelry before swimming, cleaning, playing sports, or any other activity that could damage it.

Why Was Peridot Chosen For August?

The peridot birthstone is known for being made in extreme conditions. It can be found in both hardened lava that came from deep in the Earth's mantle and meteorites that came from space.

Sardonyx is easy to find and not too expensive, so it is a good addition to any collection. Sardonyx's quality factors are not as clearly defined as those of other gemstones like diamonds, but the 4Cs (color, cut, clarity, and carat weight) still apply.

What Happens When You Wear Peridot?

People believe that peridot, which is also called the "stone of compassion," can bring good health, a good night's sleep, and peace in relationships by keeping the mind and emotions in balance. This friendly, bright green stone has the strange ability to make people more eloquent and creative. It also makes people happy and brings them joy.

It's worth noting that not all August gemstones are featured here, as many other gemstones might be related to August in various tints and hues.